NY Rangers film room: What do the Rangers have in Vitali Kravtsov?

During the offseason and past trade deadlines, I often talk about dominoes, in that GMs often have to first assess the play of their existing youth pipelines before they go out and make moves to improve their roster. Two years ago, the Rangers needed to add more of a net front presence and physicality down the middle, as Mika Zibanejad, Ryan Strome, and Filip Chytil were all transition players. In that scenario, Chytil’s development was the domino that pushed Strome out of town and Trocheck into MSG. This season, a similar scenario presents itself, as Vitali Kravtsov solves many Rangers wing depth issues.

Kaapo Kakko finally looks like a solid top six right wing, but after that Kravtsov is the only other natural RW on the roster. All other wingers, aside from Panarin, are lefties who have mostly played LW throughout their careers. This likely means that Kravtsov’s play is going to be the main domino that will impact Drury’s trade strategy as we approach the deadline and beyond.

Of course, assessing Kravtsov’s play is easier said than done. On one hand you have a player that has only put up 10 points in 45 career games. On the other hand, he has one of the lowest xGA per 60 on the team. The below RAPM chart from Evolving Hockey perfectly illustrates all this. 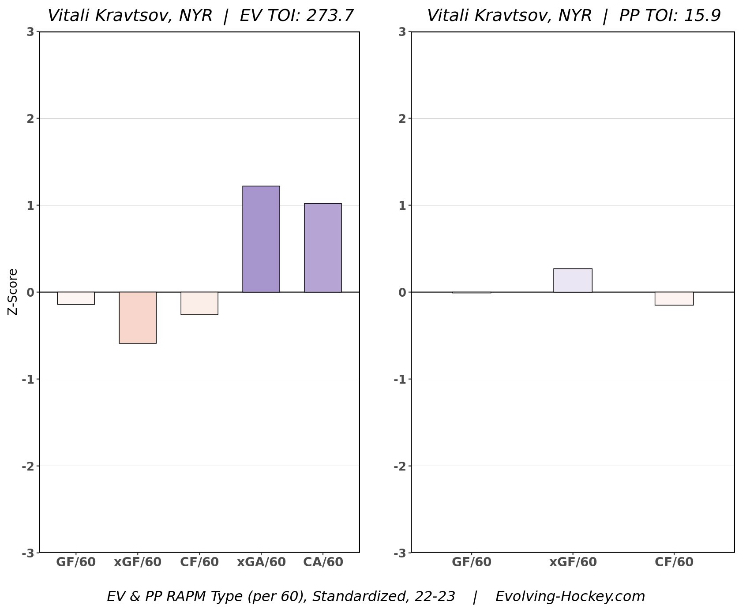 However, the sample size here is likely too small to draw any real conclusions. And I think it’s safe to say that when Vitali enters his prime, he won’t be a 4th line defensive winger, which is what these charts are illustrating.

I thought maybe these figures might by influenced by who Kravtsov has played with, as he has been deployed all over the place this season, but the chart below doesn’t really give you any clear takeaways. 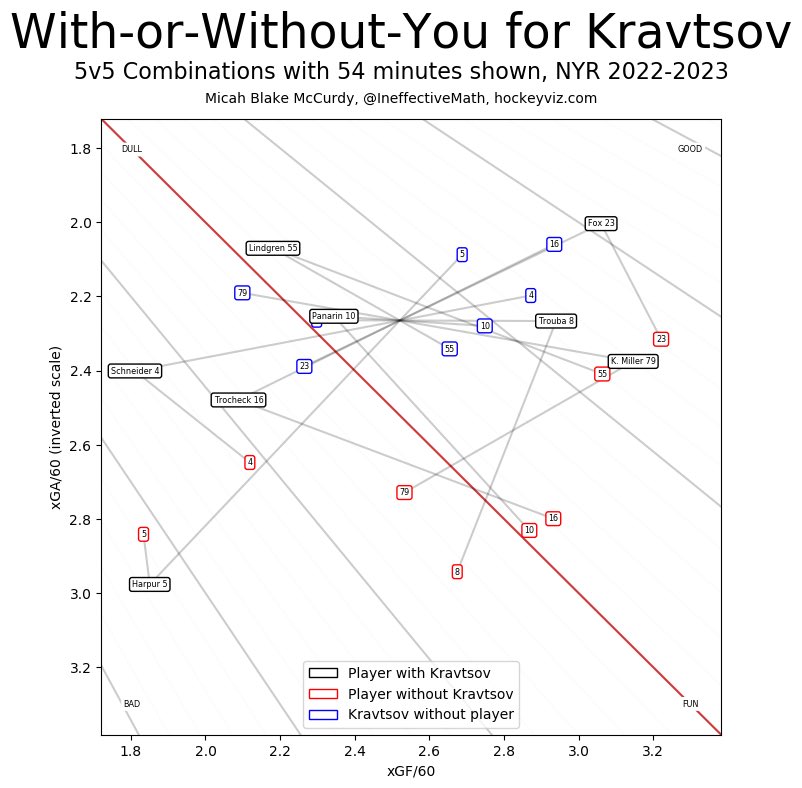 So without any clear a-ha data points, I thought it might be useful to head to the film room and analyze his game the way I did with Zac Jones and Alexis Lafrenière.

There’s a few under the radar things that standout about Kravtsov’s game when the puck is on his stick. The first is puck protection. He tends to carry the puck in his hip socket and will use his body to shield himself from defenders.

This is a very important trait for wingers, as much of their play comes off the wall. Obviously being a good stickhandler helps, but once you face some of the better defensemen in this league, you need additional tools.

Here’s a few examples of what I’m talking about.

Kravtsov from Panarin makes it 6-1 Rangers, and Jones accidentally takes out his own goaltender pic.twitter.com/eQEnmaYIxI

Notice how Kravtsov senses the coverage closing and immediately shifts the puck to his hips to avoid getting stripped. That’s a pro move.

The other thing that quietly stands out is his skating and particularly his edge work. He’s excellent at these change of tempo moves to get open or to find a lane and it’s because he can use the edge of his skates without losing speed or getting his pocket picked in stride.

Watch his left foot here as he enters the slot against Columbus. That little c-cut helps him get position on Elvis.

Kravtsov sets up Rooney, but Varlamov makes the save #NYR #Isles pic.twitter.com/V1K2fCyJyK

Same story above against the Islanders.  His edge work helps him match pace with Rooney for a nice setup off the rush.

Where he needs work

For me, the biggest areas of development for Kravtsov is two fold and somewhat related. Right now he kind of reminds me of Buchnevich earlier in his tenure here or even Chytil. Both had underlying skills, but needed to fill out to handle the small ice plays of the NHL.

As I’ve highlighted, once Kravtsov is in stride, he’s difficult strip. However, when he’s not in stride he seems a bit imbalanced and easily knocked down. Part of this is his frame, but part of it is because he’s too upright.

It was hard to find example of this on video, since most highlights are just goals, but this one below kind of gets at what I’m talking about.

Wrote about how player development isn’t linear and how each player’s path unique, in the context of Kakko, Lafreniére, and Kravtsov, with insights from #NYR associate general manager Chris Drury & @Thats_Offsidehttps://t.co/ziQ9bqepXN pic.twitter.com/MauRtrb3VM

Notice his stance here along the boards. It’s almost like he’s just standing straight up. This is what coaches often call being flatfooted. So whether you have or don’t have the puck, if you’re too upright, it will be hard to react to the play or be in a position to take an explosive first step.

So Suit, what’s the path forward for this kid?

At this point, I think the organization is mostly handling Kravtsov’s development the right way. Clearly, he’d rather play in Russia than the AHL, so the Rangers really have no choice but to keep him around.

Given the lack of roles from Gallant, I think its fine for him to oscillate between the 2nd and 3rd line, depending on matchups and the performance of his teammates. Either way, what he does with the minutes that are afforded to him will be vital as we look to build this roster towards a Cup.