Barclay Goodrow is miscast as a top-6 winger, and everyone knows it 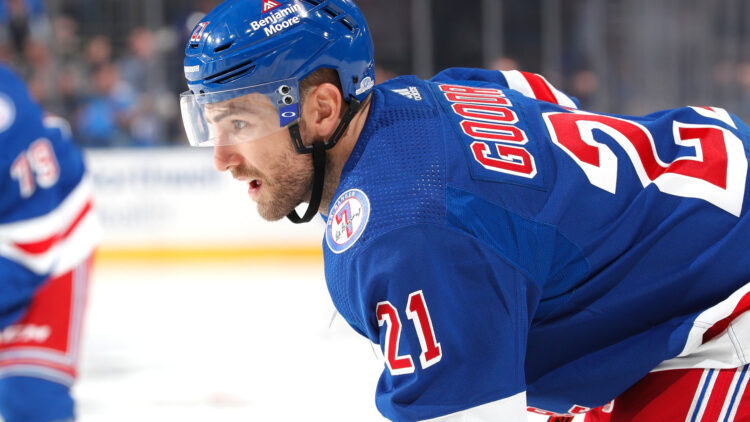 Barclay Goodrow is a known entity at this point in his career. He’s excelled when put in the proper role as a shutdown forward, capable of playing both center and wing. But for the last few games, Goodrow has been in the top six, a role that does not suit him. Simply put, Goodrow is miscast as a top six winger, much like Dryden Hunt before him. The top six is for scorers and play drivers, to which Goodrow is not.

Puck possession metrics aren’t everything. We do stress that more in the top-six, of course, since their role is to keep the puck in the offensive zone and generate chances at a quantity and quality level. While they matter more, you tend to overlook some mediocre (read: mediocre, league average. Not awful) metrics. Mika Zibanejad is a prime example, as he’s such a good shooter that his value as the 1C outweighs his “okay” possession metrics. By pairing him with Chris Kreider, who has excellent metrics but isn’t the shooter Zibanejad is, you create a perfect complement and dual roles for your top line.

With Goodrow, despite his career highs last year and his pace this year, he’s not producing to what you expect from a top six player. No disrespect to Goodrow, who is doing everything he can on the ice, but without a 50 point pace, he’s going to need those solid possession numbers to justify his spot in the top six.

At an individual level, Goodrow does not possess those possession numbers to justify his spot in the top six. This is not a slight, as Goodrow is miscast in this role. His skill set doesn’t complement Artemiy Panarin and Vincent Trocheck, who need more than just a grinder to bring out their best.

Goodrow is miscast, and it’s impacting the second line

The concern with Goodrow in the top six is its impact on his linemates. While we are dealing with relatively small sample sizes, as Goodrow has 43 minutes with Panarin and Trocheck, it’s a significant negative impact. The Panarin, Trocheck, Goodrow trio doesn’t drive possession or score at a top six rate:

Right off the bat, we see that while the trio generates quality chances at a decent clip, it doesn’t generate quantity chances, which means more time spent in their defensive zone. They also aren’t scoring, and the 1.36 GF/60 for the line is pretty bad. They do have a 4.17% shooting rate, which certainly needs to be taken into account, but it’s hard to ignore that they spent more time in the defensive zone.

Panarin and Trocheck without Goodrow has far better numbers:

Interestingly enough, while this duo has a better shooting rate of 7.21%, it’s still nowhere near where you expect them to be, which is around 8.5%-9%. The big difference from this duo without Goodrow is they are able to sustain offensive pressure, instead of being somewhat one-and-done in the offensive zone.

There are certainly defensive concerns from Panarin and Trocheck, notably with giving up quality chances at a higher clip than you’d like. But again we focus on roles. The second line is expected to drive offense. There’s a reason why they aren’t going up against top competition like the much more well rounded Kreider-Zibanejad-RW trio. You need them to drive offense.

What is clear is Panarin and Trocheck’s offensive ceiling is held back when Goodrow is on the line. It’s not fitting their expected role on the team. Remember, this is all role based. If the line is unable to produce offense consistently, then how do they contribute to a winning Rangers team?

The formula relies on roles and players fitting those roles. Goodrow is miscast in the top six, which is clear to those watching the line’s effectiveness on the ice. It’s time for a change.

So what’s the solution?

Given the struggles the Rangers have had scoring at 5v5, the easiest answer is simply dressing Vitali Kravtsov. Kravtsov is a top ten pick, has a high offensive ceiling, and has shown willingness to get to the corners and do some of the dirty work that Goodrow does. Injuries aside, the role fits Kravtsov a lot better Goodrow.

This would let Goodrow slide back into his role as a shutdown fourth line forward. This is what the Rangers signed him for, Since Goodrow is miscast the top six. This would also allow the Rangers to give the relatively ineffective Sammy Blais some rest.

Is something like this going to work? Maybe. Maybe not. At the very least the Rangers would accomplish two things. They’d figure out what they have in Kravtsov, and they’d have Goodrow back in a role where he will hopefully thrive.