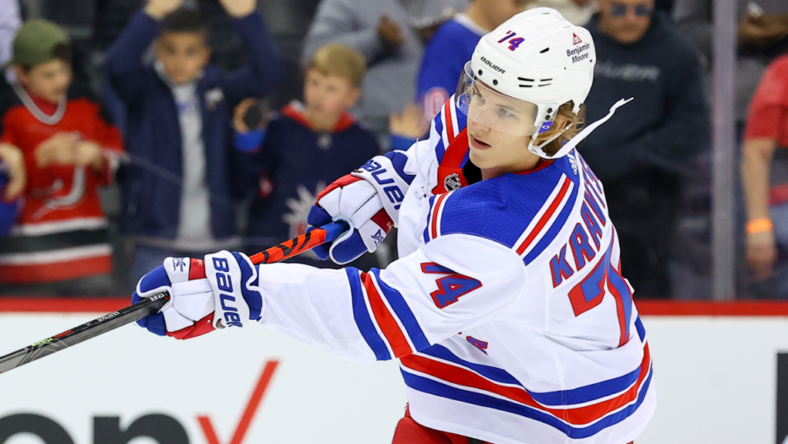 It’s time to play Vitali Kravtsov. The kid has been healthy for the last two games, yet has been a scratch. There’s the “dental work” issue, which is a week old at this point, and it seems that Kravtsov has been healthy scratched while Barclay Goodrow is in the top six. Goodrow, a fine player and an ideal fourth liner, is miscast in the top six as a long term solution. It’s time for Gerard Gallant to play Vitali Kravtsov and get him back in the lineup to fix this.

Assuming Kravtsov is actually healthy enough to play, and don’t discount dental work because some of the meds and procedures can really do a number on you if you’re getting banged against the boards regularly, then it’s time to get him into the lineup. There’s no trade coming that we know of, so sitting him doesn’t help him.

On the ice, Kravtsov is one of the better Rangers forwards in maintaining possession. He carries a 56.42% xG share (6th among forwards), albeit in a very small sample size, and he achieves this by the type of player he is. He works along the boards, he creates space, and he slows the game down when the puck is on his stick. These are all solid qualities of any player, especially one in the top six in an offensive role.

No disrespect to Goodrow, he simply doesn’t do that. He’s a shutdown player and forechecker. He doesn’t have the touch that Kravtsov has, and he’s miscast as the third to Artemiy Panarin and Vincent Trocheck. This holds especially true since Trocheck and Goodrow have similar play styles, with Trocheck much more effective at scoring. A perfect complementary player would be Kravtsov, who does the dirty work but can also score.

While Kravtsov may not be the final answer in the top six, he’s a far better option than Goodrow, who appears to be the only option to Gallant right now. In terms of finding an answer to the SH% woes, sometimes the simplest answer, swapping Kravtsov and Goodrow, is the best answer. That would move Goodrow back to the fourth line and take the ineffective Sammy Blais out of the lineup completely. It’s a no brainer at this point.

If the Rangers are struggling to score goals, and one of your higher ceiling offensive players isn’t in the lineup, doesn’t it make sense to dress him? It’s time to play Vitali Kravtsov.