Jimmy Vesey has been a pleasant surprise for the Rangers 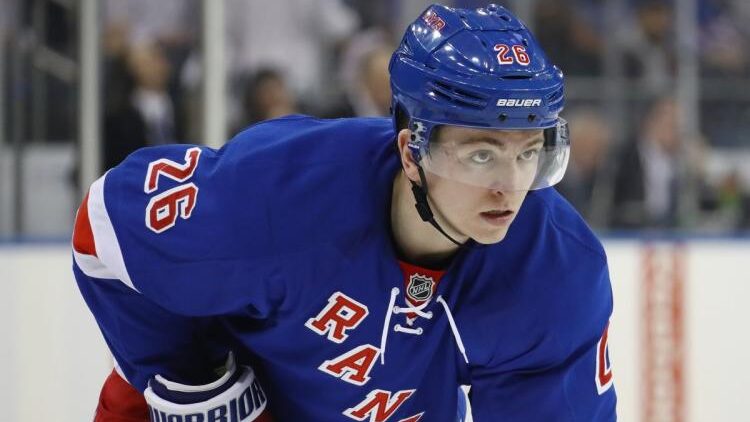 When the Rangers signed Jimmy Vesey to a PTO, the collective fan base groaned and feared the worst. Vesey would be a teacher’s pet and get top minutes over kids with minimal results. Vesey’s strong preseason led to Dryden Hunt eventually being waived, which led to more groans. But Jimmy Vesey has been a pleasant surprise for the Rangers, silencing doubters in the process.

Mentioned on this week’s Live From The Blue Seats, Vesey’s role on the top line has been earned. The initial expectation from Vesey was more of a shutdown role, strengthening the fourth line and hopefully making them a true shutdown line. That was how his game had evolved with the Devils, with some horrid on-ice luck, and it was safe to assume he was going to continue in that role.

Some late night #NYR trivia for you all.

Adam Fox currently leads all NYR defense with a 65.3 xG%. But he does not lead all NYR skaters.

WITHOUT LOOKING, which forward has a higher xG% than Adam Fox?

I posed this question on Twitter after recording Live From The Blue Seats, since I stumped both Rob and Becky with it. The correct answer is Jimmy Vesey, who leads all Rangers skaters with a 65.3 xG%. Given Vesey’s defensive evolution, you’d think this is driven almost entirely by defensive numbers. But Vesey is 3rd among Rangers forwards with a 3.73 xGF/60 while keeping his strong 1.88 xGA/60, which is 2nd among Rangers forwards.

These results have led to Vesey getting a shot in the top six, and with good reason. It would be easy to chalk this up to Gerard Gallant playing his pet more, but Vesey has flat out earned this ice time. But the counting stats like goals and assists haven’t kept up with the numbers, so why is that?

The low hanging fruit regarding Vesey’s production is the same that we give to basically every other Ranger: His on-ice SH% is 7.14, well below what you’d expect, even from a player mostly in the bottom six to date. Vesey has also spent most of his time with Barclay Goodrow, not a noted scorer, which likely plays into some of the low on-ice SH%. More time in the top six might change that.

Vesey also has just two goals on 29 shots, for a 6.9% shooting rate, well below his career average of 10.6%. That requires a grain of salt, however, since Vesey hasn’t hit a 10% rate since the 2020-2021 season. It’s more than just a stretch of bad luck for Vesey. So we must question whether he has the finishing talent to stick in the top six. Early in his career you would say yes. But now? Not so much.

The good news is that Vesey has been a pleasant surprise for the Rangers, who may have found their “Jesper Fast” type player. He’s a solid three zone player, does the dirty work in the corners, drives play, and is just a smart hockey player. Vesey has been well worth the contract and losing Dryden Hunt to waivers, at least thus far. He may be miscast in the top six, but he’s earned his shot for now.