Not only does Trouba hit the net, he’s the best in the NHL at creating rebounds 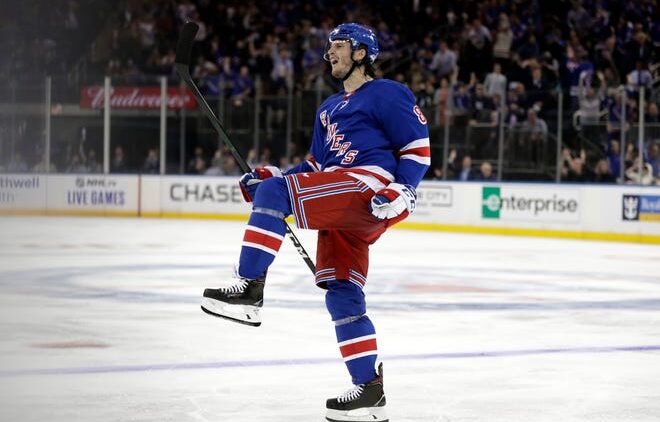 Yesterday we discussed which of the Rangers defensemen miss the net the most. Most of the blame from fans has been on Jacob Trouba’s shoulders for shots that land on the moon, it was interesting to see that not only does Trouba hit the net, he was one of the better defensemen on the Rangers in doing so. While that was an interesting discovery, there’s more room to expand this exercise to the rest of the NHL.

Shots on net from the point aren’t about scoring. It’s about creating scoring chances through rebounds, deflections, and chaos. Sure, every now and then a shot will go in, but defensemen normally have sub-6% shooting rates for a reason. Goals are more likely to come from a hard, low, accurate wrister than a booming slap shot.  When teams collapse in front, blocking high danger chances, teams need to get creative. It’s an area that has plagued the Rangers for a few seasons now.

The narrative has been that the Rangers, specifically Trouba, takes bad shots. But how true is that?

Comparing the Rangers defense to the rest of the NHL

The next step in the process is to compare them to the rest of the league, to see if the Rangers defensemen have a missing the net problem. To do so, we look at all NHL defensemen with at least 100 mins TOI, and run the same exercise we did yesterday. This gave us 200 defensemen to work with. To account for difference in raw numbers, we take the percentage of shots that don’t make it to the net.

Again, you’ll have to excuse the crude screenshot of the 5v5 stats from Natural Stat Trick. Breaking down what each column header means:

Getting the puck through is certainly a skill, and perhaps the feeling that Trouba is by far the worst offender is because he shoots the puck the most out of all the Rangers defensemen. In fact, Trouba and Fox are in the top-50 in terms of getting the puck through. Zac Jones is up there as well. And also as expected, K’Andre Miller struggles with this.

For what it’s worth, the player with the highest percentage of shots that don’t make it to the net is John Klingberg at 78.57%, but he’s only taken 28 shot attempts. Erik Gustaffson (Washington, 47 shot attempts, 72.34% miss rate) and Ryan Pulock (Islanders, 59 shot attempts, 69.69% miss rate) are the two highest of those that have taken at least 40 shot attempts. And yes, 40 is just an arbitrary number.

Expanding to remove those that don’t shoot much

Breaking this down even further, it seems like a poor exercise to include players that don’t really shoot much. After all, it’s not their role, and the Rangers are big on roles. All credit to Libor Hajek for being the best in the league, min. 100 minutes TOI, for getting the puck through. He’s only taken 11 shots.

This is admittedly an arbitrary number, but 40 iCF (individual shot attempts) seems like a good number based on eyeballing the list. I was going to go with 50, but it was omitting too many players, including Adam Fox. The three notable players under 40 shot attempts are Ty Barrie (Edmonton, 39 shot attempts), Miro Heiskanen (Dallas, 38 shot attempts), and Torrie Krug (St. Louis, 37 shot attempts).

Oddly enough, that gave us another nice round number of 75 defensemen with 100 min TOI and a minimum of 40 shot attempts. From the Rangers, only Trouba, Miller, and Fox qualify. Again, roles matter. Trouba is actually top-ten in the league in terms of getting shots through, with Fox getting into the top-20. Of the 75 defensemen that qualify, only Miller sits in an “area to improve” section.

For completeness, the full list of 75 defensemen, in order from best to worst with the Rangers defensemen highlighted, are above. It’s certainly an interesting list, and it may honestly be too early in the season to see if this is a skill that is eluding some players like Miller, or if it is something that is just random chance for now.

In debunking if the Rangers defensemen have a missing the net problem, we can expand one more time into the types of shots they are taking, and whether they are creating the desired effect (read: creating rebounds). Luckily, again, Natural Stat Trick has that available for us.

Trouba’s 16 rebounds is way ahead of number two in the league, Brent Burns, who has 11 rebounds created. It’s not close, folks.

Do the Rangers defensemen have a missing the net problem?

The point of this exercise is to potentially put an end to some of the perceived issues that the Rangers defensemen have a missing the net problem. In fact, they really don’t. It’s perceived that way because it is quite funny when we see a Trouba slapper miss the net by 50 feet. But the reality of the situation is more than half of his shot attempts at 5v5 get through.

From a strategic standpoint, we were looking to see if some of the Rangers scoring woes might be systemic. The Blueshirts certainly have a problem with lower event teams that block the home plate, high danger areas. When teams do this, the best strategy is to counter by getting pucks on net from the points that are open, and crash the net for rebounds and deflections. The theory was the Rangers weren’t getting pucks through. But they are.

If that’s the bad news, the good news is that this won’t last forever. We will see the Rangers’ shooting luck turn around. The question is: When?