Can the Rangers afford Andrew Copp beyond 2023? 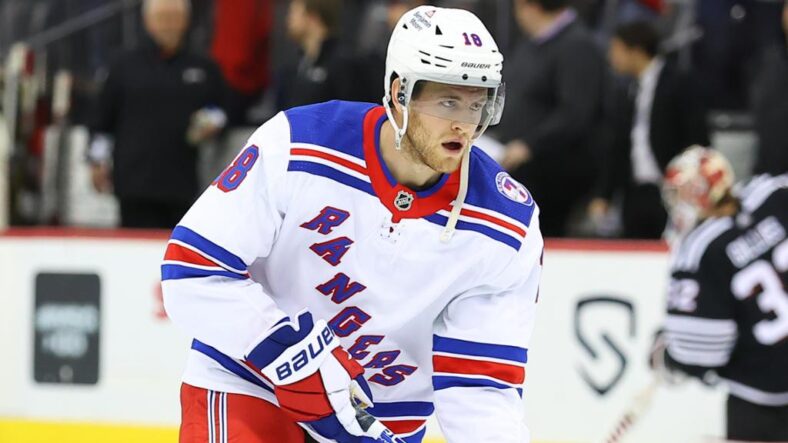 Ryan Strome is likely headed for greener pastures this offseason. Thus the main offseason question for the Rangers shifts. Instead of “Copp or Strome?” it becomes “Can the Rangers afford Andrew Copp?” Copp, who was acquired at the trade deadline for Morgan Barron, a 2022 1st round pick, and an option of a 2022 or 2023 2nd round pick, instantly clicked with Strome and Artemiy Panarin on the second line. Copp’s 8-10-18 line in 16 games was solid, and he followed that up with 6-8-14 in 20 playoff games. Strome is a goner, but given the projections and cap hits expected beyond next season, is Copp a goner too?

The Rangers can certainly afford Copp for next season. They don’t even need to get that creative to do it. Copp’s projected 4 years, $5.768 million contract per Evolving Hockey fits into the cap for the coming season. He’d fill an immediate need in the top six, be it at wing or at center, and he’d replace Strome on the penalty kill. Copp likely wouldn’t take Strome’s spot on PP1, that should go to Alexis Lafreniere, but he would add some balance to the second powerplay unit, which didn’t have too much success last year. Limited time on the ice matters, of course.

But the issue is the 2023 offseason, where the Rangers need to re-sign Lafreniere, K’Andre Miller, Filip Chytil, and possibly more –Vitali Kravtsov, Zac Jones– depending on how this offseason shakes out. The assumption right now is that the cap ceiling won’t go up too much next season, so the Rangers are working with minimal cap space and little hope that next year will be different. So any money they commit beyond this season becomes a risk.

The other factor is that Copp’s camp is adamant about seeing how the free agent market plays out. This could be Copp’s last chance to get the bag, since he will be 28 at the start of next season. Even a four year deal puts him at 32 years old for his next deal. The way hockey contracts have been trending, it’s likely his contract at 32 years old won’t match what he can get now.

Even at a discount, can the Rangers afford Andrew Copp?

Operating under the assumption the Rangers will shed Patrik Nemeth’s contract and the cap ceiling goes to $83.5 million for the following offseason, it gets tight quick.

Here is what I have for next year, using EH's contract projections for all but Kakko (Khodorenko is a place holder, just focus on salary, lines don't matter). Need 7D/backup G.

Call it $200k cap space for next year. Unsure what that translates to for 23-24, need some help there pic.twitter.com/AiGeSxds0p

The example here that I built out with HSM is related to the Kakko offer sheet discussion, so the Kakko number is high, but the Sammy Blais number is low, so let’s just assume the Rangers have that $2.2 million in cap space for a 7D and a backup goalie, which is about $200k in cap space heading into the 2022-2023 season. Knowing that Laf, Chytil, Blais, Kakko, Kravtsov, Miller, and Jones will all need new deals using the example above, you’re looking at about $15 million of cap space, factoring in Ryan Reaves and the buyouts coming off the books, to sign all of them. Again, not much to work with when Copp is there at $5.768 million.

So when we ask can the Rangers afford Andrew Copp, it’s looking more and more like a ‘no’ right now. That could change with an unexpected trade, but as of now it’s looking grim. And that’s fine. It opens the Rangers up to other scenarios to address center. One option is to promote Chytil to 2C and sign a bargain bin middle six center like Paul Stastny or someone comparable. You then get 50+ games with Chytil at center, presumably with Panarin, to see if it works.

There are ways to make it work, and there are ways to play cap games to ensure it works. But the Rangers may be best served trying to stay cheap long term to prevent cap headaches down the road. Copp at $5.768 million seems great on paper, but it may not work for the Rangers.