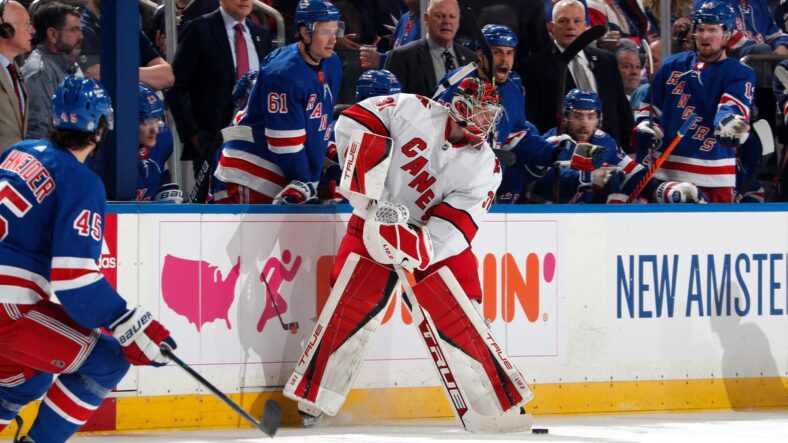 In case you missed it, Frederik Andersen’s return seems to be imminent for the Carolina Hurricanes. He’s been skating and practicing, and the Canes look like they will get him back for tonight’s Game 4. The Rangers have been facing Antti Raanta, who if not for injuries would still likely be a starter, for the first three games of the series.

But Andersen’s return is, quite honestly, not a big deal for the Rangers. He’s a solid goalie, albeit with questionable playoff performance, and he had a close to Vezina quality season this year. As good as he’s been, this isn’t something that should concern the Rangers, or even change their gameplan.

The key for the Rangers is to continue to mimic how they played in Game 3’s win. The expected goals numbers that Steve Valiquette tracks looked bad on the surface, but you can see that it was a good defensive effort by the Rangers by looking one level deeper.

Right, this is NOT a game Igor would dislike from his team.

6 High Danger on a night where you face 44 rhythm shots. Not too many goalies will complain about that. #NYR

Giving up just six high danger shots to the Carolina Hurricanes is a massive win for the Rangers. The shot totals look bad, but as Vally said, goalies will take 100 shots from the points and not miss a beat or complain.

The key for the Rangers is getting offensive chances and beating the Carolina defense, which has been stifling. Perhaps the antics in Game 3 with Max Domi and Tony DeAngelo spark something. Perhaps the goals by Mika Zibanejad and Chris Kreider wake up the rest of the top six? Or perhaps those line changes Gerard Gallant made, generating just 1.60 expected goals for, just find a better rhythm?

Either way, the Rangers have been doing a wonderful job of limiting the Canes’ offensive chances, something that Andersen’s return has zero impact on. If the Rangers can generate their chances, then few goalies will make a difference in their matchup.