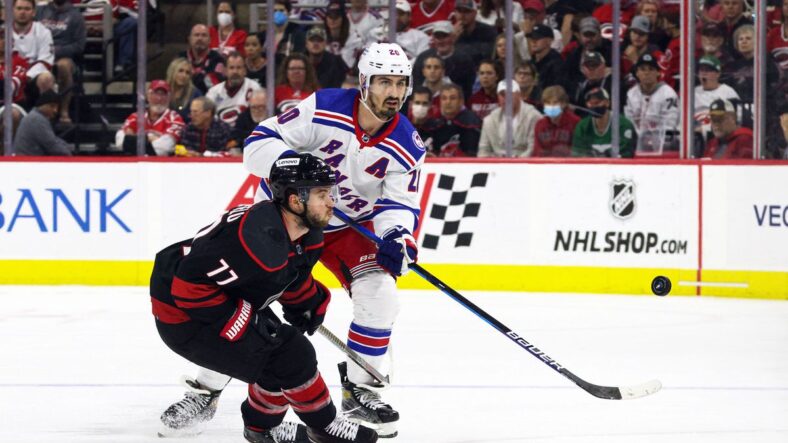 Both Gerard Gallant and the top six are contributing to the failing Rangers in the second round. They were always going to go as far as their stars took them. Very skilled but easily defended, both the Penguins and now the Hurricanes have done a masterclass at shutting down this potent group for stretches at a time. This isn’t a disappearing act, it is good defense and a lack of adjustments by players and coaches.

The big issue right now is that the kid line is carrying all of the Rangers offense –one goal– in this series. In two games, the top six has been completely shut down, much like they were at the beginning of the Penguins series. Last night, the top six contributed just five shots on goal, a big part of the failing Rangers dropping two in Carolina.

This issue gets compounded when five of the top six, save for Andrew Copp, comprise the top powerplay unit and gets at least 75% of each powerplay. That powerplay went 0-for-4 last night, another major contributor to the failing Rangers.

We knew that beating the Canes would take near perfection, and the top six not carrying their weight will mean a quick exit against a clearly better team. This almost doomed them against Pittsburgh too, but to their credit, the top six stepped up in the three game comeback.

But be forewarned, a three or four game comeback against the Carolina Hurricanes is highly unlikely. The Canes are beatable, but not the way the Rangers are playing.

Gerard Gallant, on the other hand, has been a man of few adjustments. We know he hasn’t been changing the lines up to start each game, but perhaps that changes following a mid-game shakeup last night. But that shakeup was mostly because Tyler Motte was the only Ranger who generated actual shot attempts with seven last night.

Lineup changes are one thing, and it’s the front-end of things we see on the ice. What we haven’t seen are the back-end changes, not on the defense, but in the process which the Rangers run things.

As mentioned above, the Rangers are very skilled but easily defended. They go for the stretch pass and use that, with little structure thereafter, to beat you with high quality chances. Mike Sullivan took that away by moving D1/D2 up tot he red line and breaking up that option. Rod Brind’Amour is also breaking that up, and when you add that to the stellar defensive hockey they’ve been playing, the Rangers have just one goal, and none from the top six.

Gallant’s failing Rangers need to adjust here. They aren’t a team that is going to wow you with organized breakouts, so we can stick to reality here. What they’ve needed to do, and haven’t done with any consistency in the playoffs, is get an active forecheck going, reading and adjusting the play. Against Pittsburgh it was getting F2/F3 more engaged in the offensive zone forecheck, reading the play and taking out pass lanes, and moving D1/D2 up to the red line to ensure no speed through the neutral zone.

While the failing Rangers are actually relatively fine defensively, something they weren’t against Pittsburgh, this adjustment would also help them force turnovers and create more offense. You can’t win if you score one goal every two games. In fact, that’s a surefire way to get swept.

The failing Rangers need Gallant and the top six to step up. They are playing with both hands tied behind their backs. If no adjustments are made, by player and/or coach, then this will be a short series.