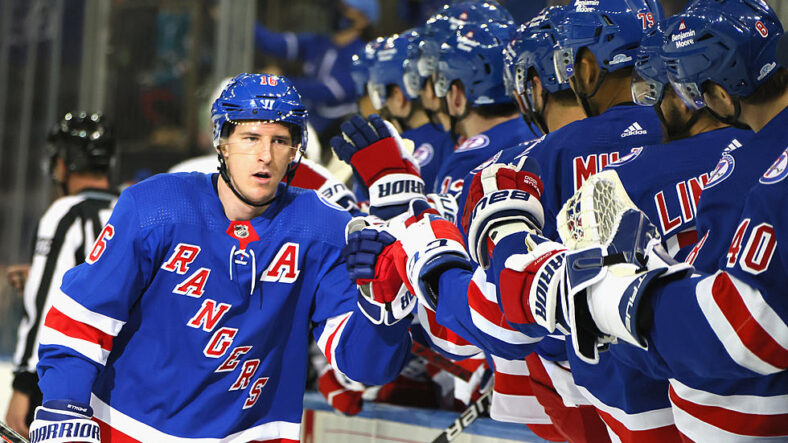 Hold on to your butts, folks, it’s Round Two Gameday and we’re facing a really good, irritating team. Sportsbooks, analysts, broadcasters, and probably everyone’s mother has the Hurricanes winning this series handily. Let’s see what our BSB staff thinks with their Rangers Round 2 predictions – and don’t forget to share your picks in the comments!

By the shots and chances for offensively, the Hurricanes slowed in round 1 compared to their season long numbers. While we can hope this is a trend, Boston was still one of the top defensive teams of the NHL, so the Rangers would be indeed be fortunate to see similar results. While NYR’s team defense did get better as the Penguins series went along, the one hope for the Rangers has also been their weakness all year: generating offense at 5v5. If the Rangers can find a way to make this a track meet (four skating lines help, aka Reaves out for Hunt/Brod/Goodrow) and trade chances at somewhere near 50% with Carolina, I’ll take the dice roll with Shesterkin (as always). Let’s just say I’m hoping to be wrong if in fact there is a game 7.

They knocked out a Penguins team with far better upper echelon talent. Why not the Canes? Oh, and if Igor was “meh” statistically to some last series, I CHUCKLE at the thought of what he will be now that he’s won a round. Game on

Let’s begin with some perspective. Since Lockout 1.0, the Rangers have won at least one playoff round in 8 different seasons: 2007, 2008, 2012-15, 2017 and now 2022. Compare that with a lot of other teams around the league (a certain Original 6 team from Ontario comes to mind especially) and it’s clear that even in this age of parity, the Rangers have had quite a bit of success.

Their latest series victory was high on drama and heart palpitations, but not necessarily characterized by extended stretches of strong play by the Rangers. They will have to be a lot better if they want to hang with Carolina, let alone beat them.

But here’s why I’m optimistic: they CAN play much better. The Rangers we saw for much of the first round looked like the team from the first half of the season, which was pretty much unable to defend. But they started to figure it out in January, and by the March trade deadline they were trending in a very positive direction. Their last meeting with Carolina during the regular season was a tossup in terms of shots and scoring chances until the Canes raised their level in the third period and found the game winning goal.

If the Rangers play like that, they have more than a puncher’s chance in this series. They will need everyone going. They will need injury and puck luck. They will need a legendary performance (or four) from Igor Shesterkin. A lot needs to go their way. Unfortunately, I don’t think it all will.

I’m picking Carolina in 7, but remember that we are living through an era of Rangers success right now. Enjoy the ride, and know that if it ends here, this team will be back.

After such an emotional series win I’m very curious how this team responds in game 1. This team is deeper and better than Pittsburgh. Cannot afford to fall behind every game. Canes have a slight edge up front and on the blue line. Only in goal do the rangers after an out right advantage.

This is a total Homer prediction but I’m sticking to it. Igor comes up HUGE and Panarin cements his status as the future Conn Smythe winner with 7 goals in the series.

If we’re going based on how the teams played in the regular season (as I did with the Pitt prediction), this series could get ugly. The Rangers played the Canes well in their last meeting, but overall it was a close your eyes and pray situation for the majority of the season series. Shesty will steal a game or two, and he’ll have to, but even him on fire won’t be enough to stop the Hurricanes. Please @ hockey gods, let this be the absolute wrong take.

You know what, why not them?