A deeper dive into Alex Georgiev’s struggles this season 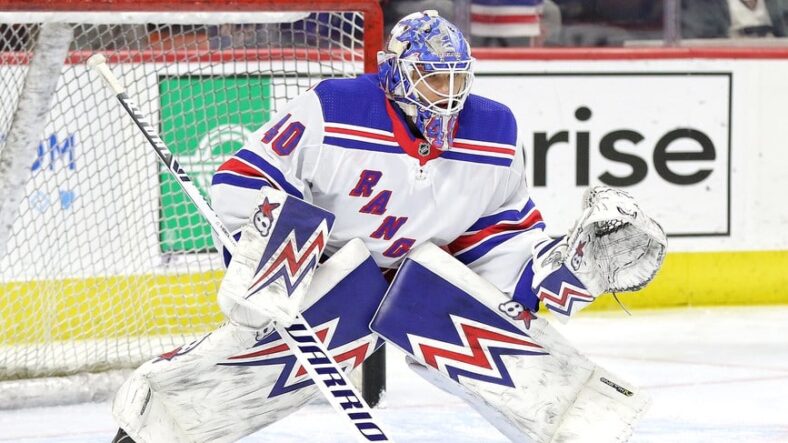 Alex Georgiev’s struggles this season are widely documented. His .898 SV% is not what you need from your backup goalie, and he put the Rangers in a tough spot. He became a punchline, fairly or unfairly. It became a joke to bet the over when the Rangers had Georgiev starting. Naturally, there’s more to his struggles than just the numbers and the jokes.

A fine end to the season

Georgiev had a fine April, stopping 127 of 137 shots for a .927 SV% and a shutout. He didn’t look out of place, and actually kept the Rangers in a few games with some great saves. He didn’t look like Igor Shesterkin or Henrik Lundqvist in net, but very few will.

Perhaps that is an input into the perception that Georgiev is a bad goalie. We’ve been blessed to go from a generational talent in net in Lundqvist to perhaps someone even better in Shesterkin. Any goalie will look mortal when comparing the two. But Georgiev is immediately the best goalie Edmonton has seen since Cam Talbot. It’s all relative.

Almost all of Georgiev’s struggles are in a 10 game span from January 21 to March 30. Many things happened here that you can point to, like very few games played, Shesterkin dominating, and Georgiev just downright looking bad. He played poorly, and that’s the bottom line.

In those 10 games, Georgiev stopped just 215 of 249 shots for a .863 SV%. This is the source of all the Georgiev memes. What makes matters worse is that 44 save shutout against Carolina is in the middle of this 10 game span and included in the numbers. Remove it, and he has a .834 SV% in the other 9 games. You can’t blame people for being impatient with Georgiev during this stint.

What about without that 10 game span?

Now none of these stats take away from the feeling that Georgiev looked lost at points. Breakaways are a big on here, with his timing completely off. In talking with Conall in the group chat, Georgiev was trying a timing technique goalies use on breakaways, where they lunge forward at the last second to cut off the angle a little more. This explains Georgiev lunging, and with his timing completely off, he looked like a beer leaguer on breakaways. It’s 100% a timing play.

The other input here is playing frequency. Georgiev does not thrive in a backup role, that we know. Infrequent starts for a guy who isn’t in that mindset makes it difficult to find a rhythm. That’s why we see his best play when he sees steady action. But that doesn’t help the Rangers at all. It hurts both him and the team. Come playoff time, if the Rangers need Georgiev for a period or a game, that may not end well.

Georgiev’s struggles have nothing to do with his time with the Rangers coming to an end. They were always coming to an end after this season the latest. For those worrying about his trade value, NHL GMs are smart and know that this 10 game stint killed his numbers, but they are also smart and will use this to lower the trade cost.

The biggest issue will be his qualifying offer of $2.625 million. Will teams commit that dollar amount despite Georgiev’s struggles? It’s possible, but it likely lowers his trade value. At least breaking down the stats show it wasn’t a season long issue, just a 10-game stint.