Is the backup role holding Alex Georgiev back? 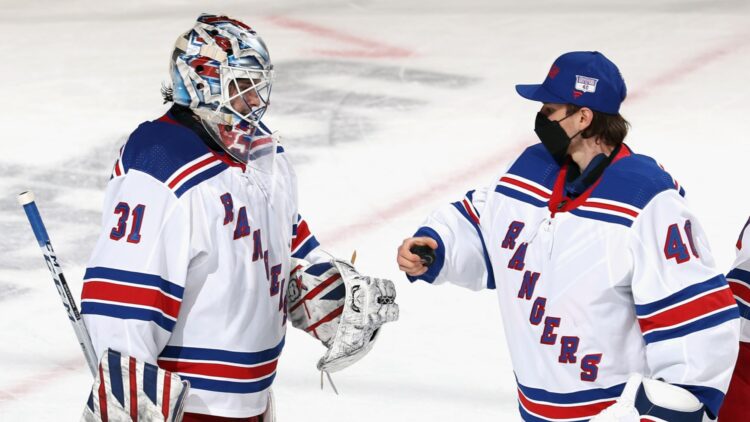 When Igor Shesterkin went down with a lower body injury, Rangers fans held their collective breath as Alex Georgiev was thrust into the starter role. To say he had been struggling this season was an understatement, and many were ready to throw in the towel. But Georgiev has been playing very well in this short stint as a start. It begs the question: Was the backup role holding Alex Georgiev back?

In Georgiev’s four games plus one period since Shesterkin went down, Georgiev has stopped 117 of 123 shots, for a save percentage of 95.1%, which is an incredible stretch of goaltending. This includes stopping 36 of 37 shots against Buffalo and 23 of 24 last night against Nashville. This is a great stretch of games for Georgiev.

The Rangers haven’t done him any favors either, as this has been a relatively rough stretch of five games. All five games since Shesterkin went down have been sub-50% expected-goals share. The first game against Chicago (42.24%) and last night’s game against Nashville (41.65%) were by far the worst culprits. The Rangers have taken their foot off the gas a bit, and Georgiev has bailed them out.

What is interesting is how well Georgiev has played. He hasn’t been perfect, and it’s clear he is not going to usurp the starting role from Shesterkin. However it can’t be ignored that whenever the Rangers have needed him as a starter for an extended run, he’s answered the call. The struggle is the spot start for Georgiev here and there, in the typical backup role.

Goalies are weird. Some goalies thrive in the backup role, and are able to get themselves ready physically and mentally for 20 games a year, maybe one game a week. Other goalies need the consistent workload to be good. It’s the same thought process about why goalies are better when getting peppered with shots, as opposed to 15-20 shots a game. It just keeps them focused and in the game.

Alex Georgiev might be one of these goalies who thrives as a starter but struggles as a backup. It’s very common, and could honestly be a good selling point for the Rangers if and when they look to move on from Georgiev. We know the future is Shesterkin’s, so Georgiev is going to be moving on at some point soon. The Rangers would also be best served finding a goalie that thrives in the backup role.