Despite losses, the Rangers are showing their best process of the season 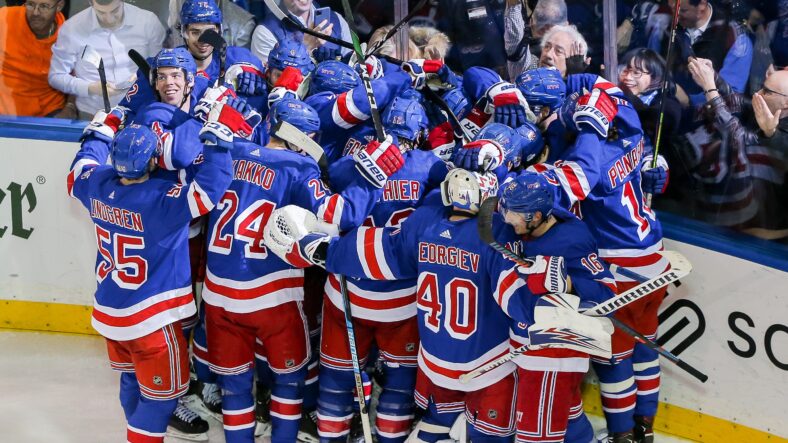 The Rangers are a whole new team following the trade deadline, which isn’t surprising. Since around November, when the Rangers were being viewed as Igor Shesterkin and the powerplay, we’ve been stressing here that the numbers pre-trade deadline didn’t matter. They were certainly indicative of the results, but they weren’t what the Rangers would be heading into the playoffs. Instead, we knew the team would load up at the deadline, thus the post deadline Rangers were the team where the numbers mattered. And now, even with some sloppy hockey, the Rangers are showing their best process all season.

Now none of this should surprise anyone paying attention. The Rangers played the majority of the season with no less than 4 AHL tweeners in the lineup at any given time. When you add injuries to the mix, they were mostly playing just six legitimate NHL forwards on any given night. Now with Andrew Copp, Frank Vatrano, and Tyler Motte added to the mix, they can finally round out their lineup. Missing Ryan Strome and Kaapo Kakko hurts for sure, but this is still a team that looks far better on paper, and it shows on the ice.

Process is improving at the right time

Right off the bat, we see the Rangers spiking their five game rolling averages in CF% and xGF% since the trade deadline. This is pretty impressive when you look at it, given how bad they were for most of the season. They spent a lot of time well under 50%, as the forward depth got gutted by injuries and poor roster management. Even since the Vatrano add, the Rangers were trending up. Adding in Copp and Motte solidified that depth even more. However more importantly than just adding these guys, the Rangers removed giant holes on the roster.

As much as we love a good Jonny Brodzinski story, or a good Ryan Reaves Release Us, these guys should not be near the NHL lineup right now. The same goes for Greg McKegg, but that horse has been beaten to death. Sometimes it’s about the players added. Sometimes it’s the players subtracted. Rarely is it both, and for the Rangers it was both.

So why do the Rangers look so bad?

Remember the historic season Shesterkin was having? Well he came crashing down to Earth, and fast. The five game rolling average SV% was unsustainably high for most of the season, and now Shesterkin is seeing his numbers normalize. He will likely finish this season around a .930 SV%, which seems like a far cry from the .940 SV% he had just last month. But then we realize it’s the difference between stopping 93% of all shots and 94% of all shots. Perspective.

The goaltending is going to stabilize, and for once it’s nice to see the skaters bail out their goalies this season. Shesterkin kept the team alive while they were the New York Wolf Pack, and now that this team is a legitimate contender, he’s able to have a slump without the team tanking in the standings.

This is perfect timing

You couldn’t ask for more perfect timing from the Rangers to right the ship. If the Rangers went into the playoffs with the roster and on-ice performance we saw through the middle of March, then we were in for a quick exit. Now, the Rangers are a team on the rise. This is a club that no one wants to face in the playoffs. Many didn’t simply because of Shesterkin. But now, with the Rangers steamrolling the opposition with superior on-ice process, and still finding ways to win games despite tanking goaltending, it’s a whole new ballgame.

This is the perfect timing for the goaltending to see a regression to the mean as well. Shesterkin couldn’t sustain what he was doing. There’s no need to panic during regression like this, as it’s more than likely Shesterkin resumes playing like his normal self come playoff time. It does put added emphasis on getting Alex Georgiev right again, as his struggles have hurt the Rangers significantly. In the end, this is the time to see the goaltending falter, not a month from now.

The Rangers are rolling. Doubters beware.

All stats from NaturalStatTrick.