This was about as embarrassing a performance as one could think for this season. The Rangers were coming off a back to back and have had an inconsistent offense, but this is the Vancouver Canucks that just swept them in both games this year. They are not a good team. One thing is clear as well, Alex Georgiev is not cut out to be a backup.

This kind of a game spoils us as Ranger fans simply because Igor Shesterkin has been a Hart trophy/Vezina caliber goaltender this season and is able to make saves that Georgiev is just not capable of without consistent playing time. Doesn’t frustrate you any less though when the Rangers have a second period as flat and as uninspired as they did last night. Gallant has to get Georgiev more consistent playing time otherwise, these types of performances are going to become common place as the schedule is as condensed as it is.

Another thing this game clearly shows is that the Rangers dearly miss Kaapo Kakko in the lineup to play in the top six. Now, the easy thing to alleviate the problem is obviously try to jockey the young players and see who gels with Panarin and Strome, but more long term, it is time for the Rangers to pull the trigger and make some trades to improve this roster.

Four Rangers flew the zone on the failed clear, which left the whole team scrambling when the puck didn’t actually cross the blue line. Three Rangers covered nothing, and JT Miller hit Tanner Pearson in the slot for the wide open chance.

Thatcher Demko started this by making ridiculous saves, keeping the Canucks ahead. That sprung the Canucks for a rush the other way, with Tyler Myers a step ahead of the back checking K’Andre Miller. JT Miller hit Myers as the trailer with a slot line pass, which is usually a higher percentage opportunity. Alex Georgiev certainly showed some rust here, as he was a bit off his angle.

Another bad clear led to another goal against for the Rangers. This time the bad clear went right to Luke Schenn, who put it on net with Juho Lammikko getting behind Adam Fox and Zac Jones. Perfect deflection.

Another guy left in front of the net all alone to deflect a shot over Georgiev.

Good play by Mika Zibanejad to get Travis Hamonic to turn the puck over. He then showed great patience waiting for Alexis Lafreniere to get open, and he roofed it, finally breaking that 117 minute scoreless streak.

Good play by Panarin to get the puck through all that traffic in front. Strome was in front here for the tap in.

The Rangers really no-showed that second period. It was brutal. But they still got some high quality chances in the first and the third, with Thatcher Demko standing on his head in the first to give the Canucks the boost they needed to take it to the Rangers. This was a disappointing game from the Rangers, but it also illustrated how thin they are up front. 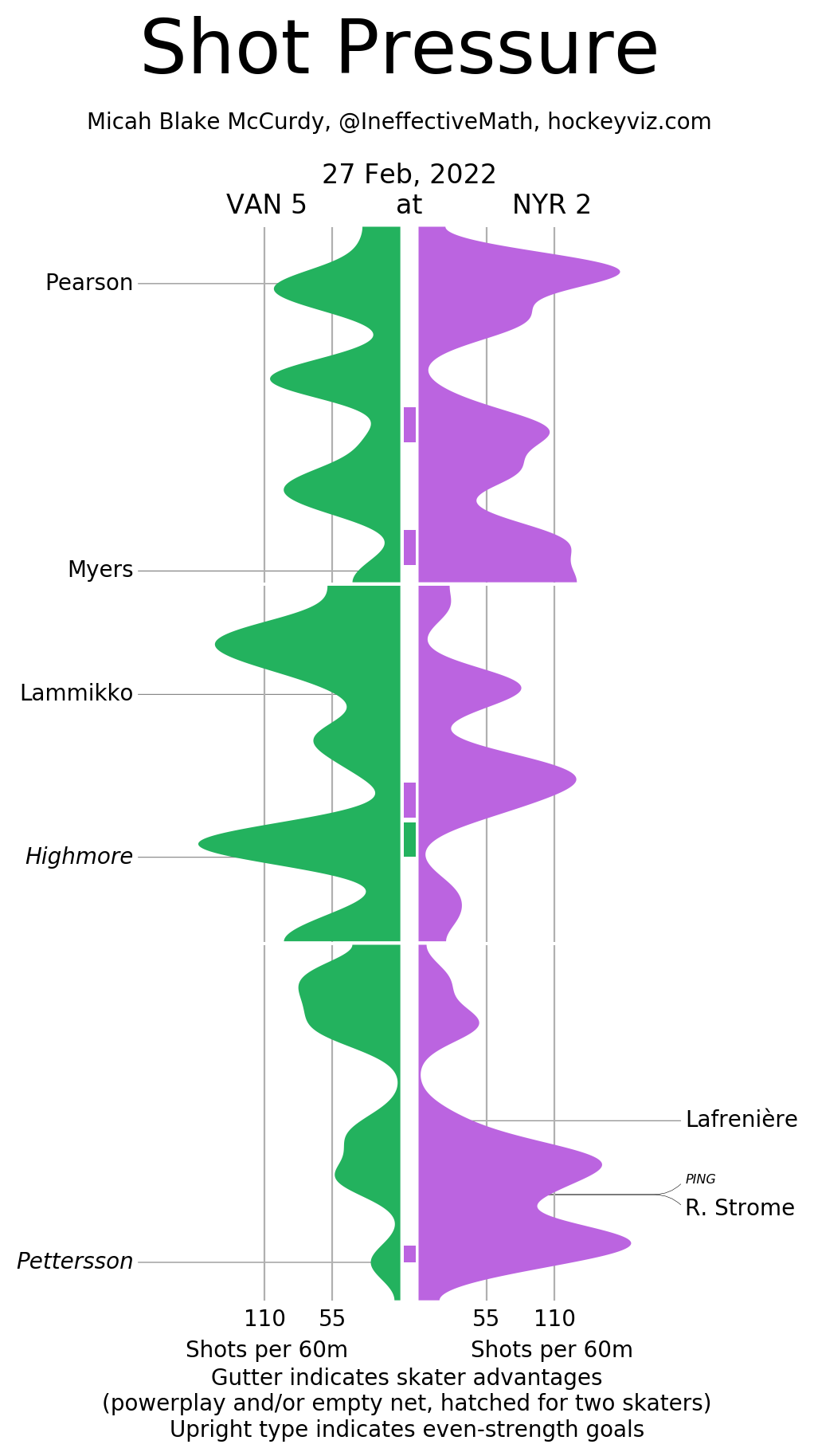 The Rangers looked great to start, but then fell apart. The Canucks owned the second period, and by the time the Rangers had some level of urgency to their game, it was too late. They got goalied in the first, but the rest was on them.

Losing back to back when you are trying to stay at the top of the division is not ideal at any time of the season. It’s worse when we are trying to see what this Rangers team can and will be in the playoffs this year.