When should the Rangers trade Alex Georgiev? 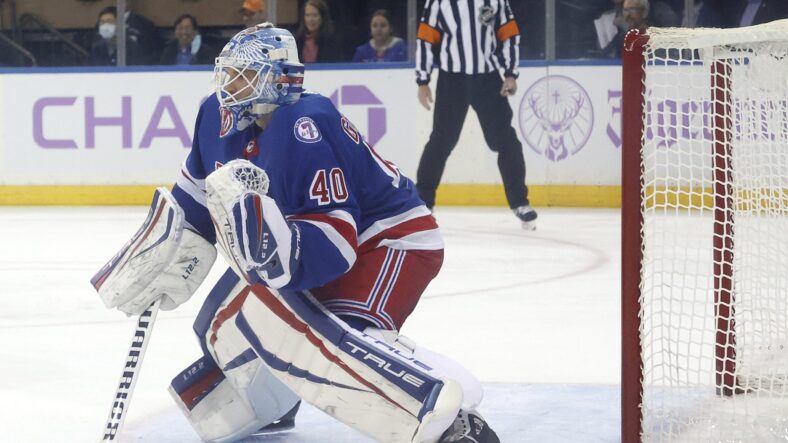 We know at some point the Rangers will look to trade Alex Georgiev. He knows it. I’m pretty sure everyone knows it. Igor Shesterkin is the guy, and Georgiev has shown enough to warrant a starting job elsewhere. The Rangers can’t afford to re-sign him in the offseason. With a few teams looking for goaltending right now, Edmonton in particular, it’s a question of when, not if, the Rangers look to trade him.

Trade Alex Georgiev at the deadline

The most logical option, and probably the one that maximizes his value, is to trade Alex Georgiev at the trade deadline. Teams know the Rangers can’t afford to re-sign Georgiev in the offseason, so he loses some value after the deadline. To truly maximize value, trading him at the deadline makes the most sense.

Putting this into the universe. Edmonton is spiraling, their stars are frustrating, the goalies have been called out, and they need help. At some point, Connor McDavid and/or Leon Draisaitl are going to request trades if things don’t get better.

The Oilers and Rangers are a clear match for Georgiev, and Chris Drury can certainly regain some trust from fans by exploiting this and their desperation. Georgiev is also young enough and has enough of a track record that Ken Holland can sell it as a win-now and long-term move for the Oilers.

Can there be a package centered around Georgiev and Kailer Yamamoto? That’s been suggested before, but likely only because the Rangers would need to add significanlt to get Jesse Puljujarvi, a guy they’ve wanted for quite some time. They almost had Puljujarvi for Lias Andersson before Edmonton backed out at the last second. Can they leverage Georgiev and perhaps Vitali Kravtsov (and probably another piece) to land Puljujarvi?

The problem with trading Georgiev at the deadline is that it creates a hole at backup goalie. This is usually filled relatively easily, and no Keith Kinkaid, as much as we love him, is not the answer. The Rangers need a backup that can play at least 10 of the 30 games in March and April. The Rangers have a rough schedule to close out the season, and Shesterkin needs the rest. There are always options, but this is something that should not be overlooked when the Rangers look to trade Alex Georgiev.

Trae Alex Georgiev at the draft

The only other possibility is to trade Alex Georgiev at the draft. This eliminates the need to find a backup goalie and also gives the Rangers a viable playoff option should something happen to Shesterkin. However, that does not maximize his value. Teams needing goaltending now may not at the draft or in the offseason. It certainly doesn’t help teams that need goaltending for a playoff run.

Trading at the draft also opens up more teams that may be looking for a young goaltender. Arizona comes to mind, as does Chicago (Alex Debrincat? Chicago says everyone is available except Kane, Toews, and Jones). It could, in theory, create a bit of a bidding war. But that only assumes that teams view Georgiev with the same value they would without this year’s playoff run. Chicago doesn’t care about that, but Edmonton does.

The only thing we do know is that, at some point in the next six months, the Rangers will trade Alex Georgiev. He’s a great luxury to have, but he’s a luxury the Rangers can’t afford after this season. Timing is everything. Let’s hope Drury has his plan set.