Is it time to split up Panarin and Strome? 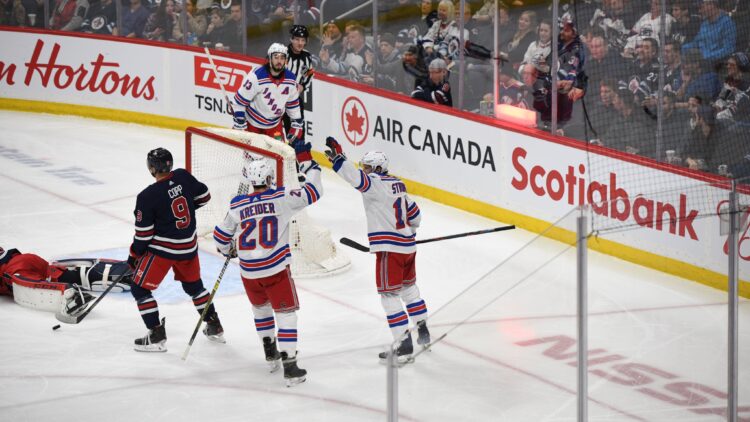 Death, taxes, and Artemiy Panarin/Ryan Strome forming two-thirds of the Rangers second line. These are the three guarantees of life. However as the Rangers continue to struggle at even strength and the need for continued, sustainable offense grows, we start to ask if the Rangers should split up Panarin and Strome. This isn’t a knee-jerk reaction either, as the duo has been very one-and-done at even strength, leaning heavily on powerplay production instead. If it isn’t working, then changes need to be made.

To say that the duo is struggling at 5v5 would be an understatement. This is less about points and more about ability to drive play and generate sustained offense. We’ve highlighted that the pair appears to be more one-and-done in the offensive zone, and that impacts the ability to keep the puck in the offensive zone. Thus, this puts more strain on the defense and goaltending.

Arthur Staple noted that Panarin’s expected-goals share over the last eight games, which starts pre Covid protocol, is an abysmal 1.44. This jives with the one-and-done nature of the offense, meaning they get their one opportunity, and even if it doesn’t even wind up as a scoring chance or even a shot on net, they are retreating back on defense. There is minimal, if any, puck support and retrieval. This is directly related to a lack of a forecheck as well. Thus this allows speed out of the defensive zone and through the neutral zone. It really is a ripple effect.

The Rangers won’t survive a playoff run, or possibly even a playoff round, with two of their top six performing so poorly. Perhaps part of it is the lack of another top six winger. Or perhaps it’s time to split up Panarin and Strome.

The Rangers, at some point, need to find consistent even strength offense from their top nine. Only the first line is doing this on a regular basis. While part of the answer is personnel related, as the Rangers are certainly missing a top six forward in the lineup, the other part is finding the right buttons to push on the existing roster to get more out of them.

A more simplistic way of putting this is that Strome and Panarin need to play better. They need to be better, and they need to play like top six players. If they’ve gotten too comfortable with each other, then shaking things up might also shake up their play on the ice.

The argument that they only produce with each other has been debunked numerous times, and to be frank, they are only consistently producing on the powerplay. What is being done today isn’t working at even strength, and it is clearly time for a change.This vocal contingent states you can’t break them up, but doesn’t provide a solution for the current offensive issues.

This is about the Rangers as a team finding some more sustained offense. It is very clearly broken at the moment, as this is a talented Rangers team that just hasn’t put anything together. Perhaps splitting up Strome and Panarin is a solution. Perhaps not. But what we do know is that it isn’t working right now.