The Rangers second line needs to shoot more at even strength 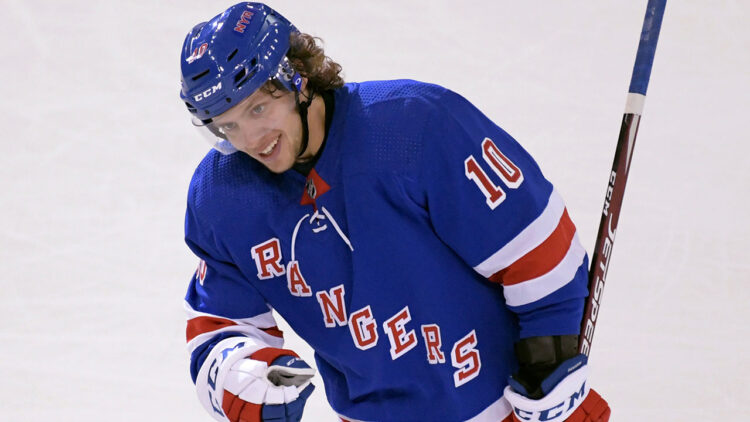 The Rangers have struggled offensively all season. If not for their powerplay, the offense would be one of the worst in the league. This isn’t something new, as there has been a lot of time spent on the Rangers and their anemic offense. It’s a bit odd, as the team is way too talented to be producing a bottom five xGF/60 at 2.19. The answer is quite simple: The Rangers need to shoot more.

As it stands today, the Rangers have a 2.19 xGF/60, as mentioned above, which is 28th in the league. They are ahead of such juggernauts like Buffalo, Chicago, Seattle, and Arizona. Yes, even Ottawa and the NY Islanders have better offensive rates so far this season. The crux of the issue is their shots, where the Rangers average just 26.1 SF/60, ahead of only Chicago. To be fair, that’s SOG. If you want to use just shot attempts, then their CF/60 is 47.69, ahead of just Arizona.

Suffice it to say, the Rangers don’t shoot. And it is maddening.

The top-six are one-and-done

At the crux of the issue is the top-six. You need your top-six to produce and drive offense at even strength. But as it stands today, none of the Rangers’ top-six crack the top-five in Rangers shots/60. The only three that crack the top-ten are Chris Kreider (7), Mika Zibanejad (8), and Ryan Strome (10). Artemiy Panarin is 14th, rounding out the big four for the Rangers. That just won’t do.

The second line is the major offender, and the issue does appear to be two fold. First and foremost, they only have two top six caliber skaters. All due respect to Dryden Hunt, he is outmatched on that line. There is no simple answer to rounding out that line, at least not yet. 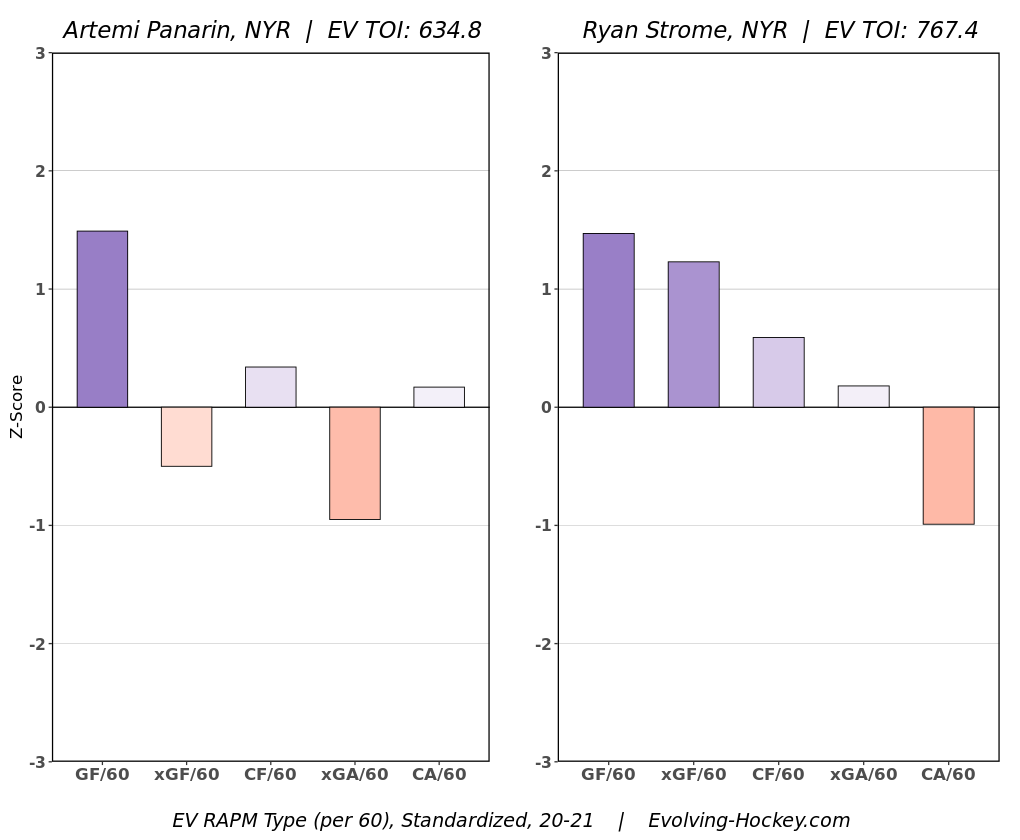 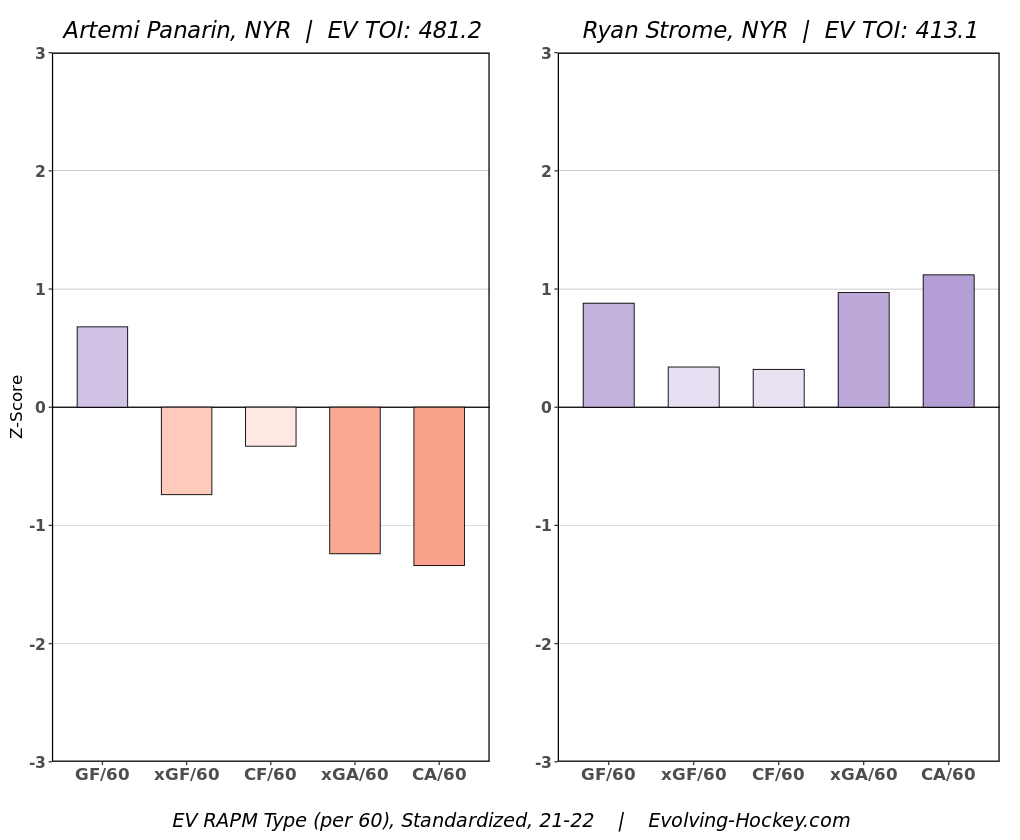 Panarin and Strome, both with declining SOG and shot attempt numbers this year, are the biggest issues at even strength at the moment. Strome seems to be missing the net more, as his CF/60 is on par with his Rangers career numbers. I’m sure some will get a laugh at that too, given the open net jokes regarding Strome. As for Panarin, he seems to be deferring far too much at even strength. His SF/60 is down almost 3 shots from last year, while his CF/60 is down almost 7 shot attempts from two years ago.

This shows in the RAPM charts above. Neither are driving offense comparable to last year’s numbers, with Strome taking a significant step back. This line just isn’t getting the job done at even strength. This is again where the discussion point of the powerplay masking poor even strength play takes center stage.

Kakko is a play driver, but depth is the issue

The major issue at the moment is a personnel issue, where the Rangers don’t have any RW depth. At the risk of beating a dead horse, the Rangers need another top six option on the right side.

The good news is that Kaapo Kakko is playing very well, and both lines played far better with him than without him. Using Natural Stat Trick’s handy line tool, we see that Kreider/Zibanejad with Kakko is producing a far better xGF% than without him. They generate more shot attempts and shots on net, which is showing up in their xGF% numbers. Kakko is clearly a play driver on that line.

As an aside, that line is shooting 5.62%. The process is there, the finishing hasn’t been. In theory, there’s a correction for that trio coming, and it will be fun to watch.

When you look at Strome/Panarin with Kakko, that line again produced about three more shot attempts per 60 minutes, but only one additional SOG. I think it’s fair to say that Kakko is a better fit with Zibanejad and Kreider, as the trio has produced better results.

Conclusions to be drawn

The crux of the issue is the one-and-done nature of the second line, producing very poor shot metrics and sustained pressure. The idea is that Hunt goes into the corners and the dirty areas, opening up ice for the skilled duo. It hasn’t been working.

There’s no simple solution. Does Filip Chytil as the 2RW help them produce more consistent offense? You’re robbing Peter to pay Paul here, since it opens up a 3C hole that, at the moment, is going to be filled by Barclay Goodrow. That’s not something I’m overly fond of, but if it fixes the second line issue, then it’s manageable.

Or perhaps it’s as simple as having Panarin and Strome put the puck on net more. I hate being that simplistic, since it’s never that simple. They are extremely skilled and have a history of producing. Maybe the answer is ride it out until a trade? Or see if Alexis Lafreniere can get them started?

Here’s a fun scenario, assuming Dallas falls out of the race. Move Chytil to 2RW and trade for Joe Pavelski to be the 3C. Certainly rounds out the top of the lineup and PP2. Just food for thought on a Monday.