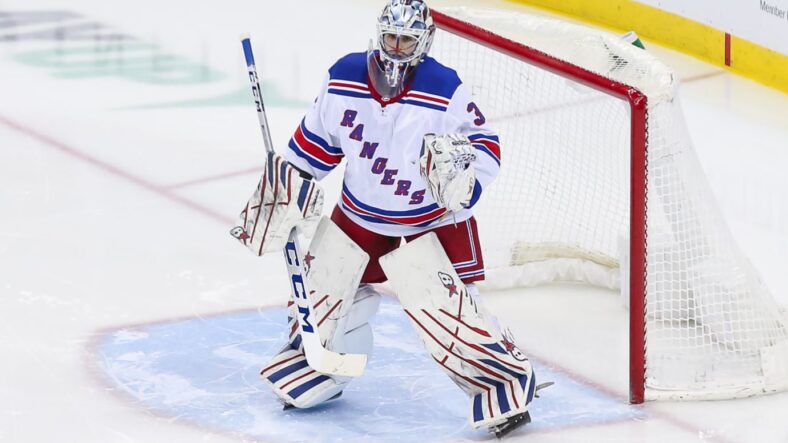 If you’ve seen the 2015 film The Big Short you may remember this scene:

In the book & movie one storyline is how a small capital fund (Cornwall Capital in reality, the Brownfield Fund on screen) focused on investments that involved negative connotations – bad things such as disasters or otherwise unlucky events. They would take out seemingly small positions based on quantitative and qualitative data that, if they became true, would pay out large because of the perceived small risk.

How does this apply to the Rangers? As of this writing, if the Rangers continues to play the way they are, they are the NHL’s version of a big short.

I am well aware that this article will not be greeted with enthusiasm by most Ranger fans (which is ironic compared to my last blog all of a month ago where I said they were headed in the right direction). So why speak up? It’s because the team is actually very unique – unique to the point where they could develop into true contenders rather than the paper tigers they currently are. 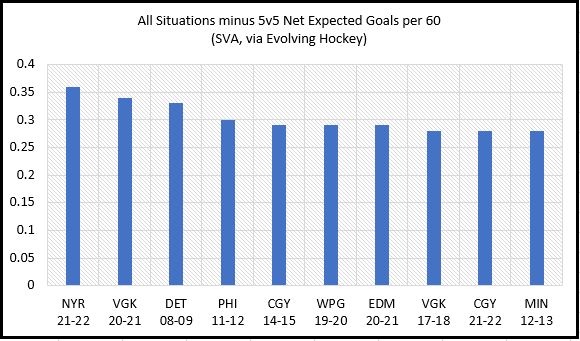 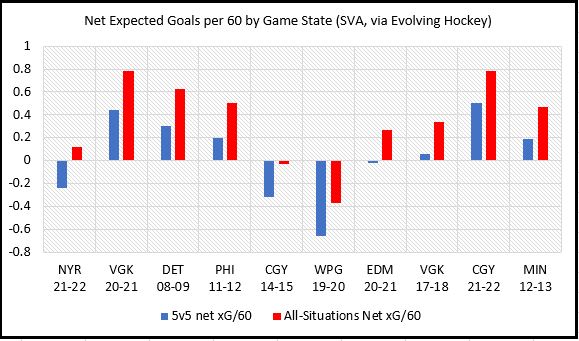 Since the shot location era started for the NHL (2007-08), there are now 456 team regular seasons worth of data. Of those 456 individual squads, the 2021-22 New York Rangers have the largest gap of all time when you take their All-Situations Net Expected Goals per 60 and subtract their 5v5 Net xG/60. Put simpler in just the context of this season: they go from being ranked 23rd at 5v5 in the metric to 13th. Their power play and penalty kill, both top ten units, drag them from being a bottom ten team to the cusp of the top ten. 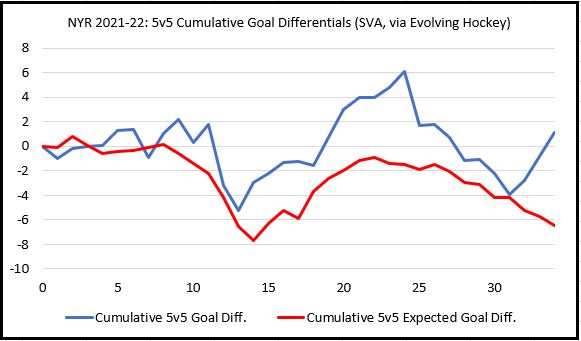 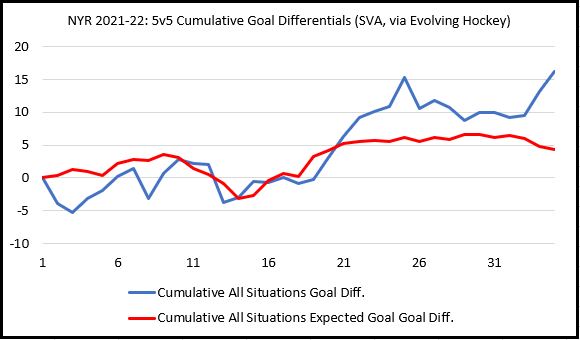 If you’ve been following them closely, some (most?) of us are willing to recognize that this team is a damn good example of the Buff Dog/Crying Dog meme. During any situations where they’re up or down a man, suddenly the Rangers are the buff dog: creating and denying scoring chances seemingly at will. Then, the moment they’re back to 5v5 play, the momentum is usually lost. The only exception was an 8 game stretch from 11/14 through 12/3 where they played some of the worst teams in the league this season.

This has all been borne out in how they’re winning games too. The Rangers rank 21st and 14th in terms of Goals For and Against at Even Strength. Flip that to All-Situations: 13th and 8th. My overall concern is that about 80% of NHL games are played at even strength, and while the Rangers certainly have great a great first power play unit and a great goaltender, time and time again we have seen how shooting & save percentage swings wildly. The Oilers were second in the Pacific at 16-7-0 with 32 points on 12/5/21 – four weeks can make a major difference. 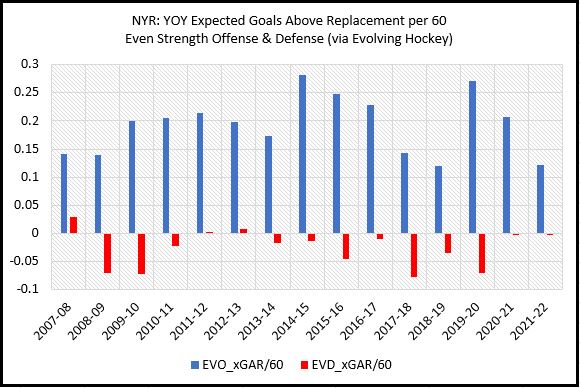 We can even look to the past in a few ways to get an idea of who this current NYR squad is most like. In terms of Expected Goals Above Replacement, this is the weakest offense since the 2018-19 sell-off. Not ideal! Meanwhile, their defense at even strength is actually somewhat decent, so it’d be a shame to waste it. 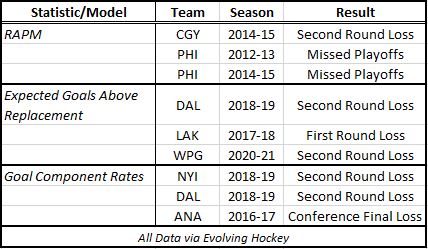 If we expand to the entire league, some interesting comparisons are found (you’ll have to trust me without sharing all of the charts). Overall, the theme here is that because of the Rangers top-end talent masking their poor play at even strength, they may be able to make the playoffs and win a round. From there, though, the teams who dictate play at even strength (with less penalties, to boot) usually win out.

While I’ve presented this mostly as a doom-and-gloom scenario, I did note above that there may be a path forward here. To me, the clear priorities are:

Seeing as creating offense has been the main issue at even strength, if the Rangers can find some kind of balance to get anywhere near a 50/50 expected goal split (especially with good opponents), then the special teams and goaltending become true advantages rather than saviors. Heck, even if they started turning in ~48% performances, it’d be a 5-10% better showing than what we’ve seen of late – and it would allow whatever key addition to hopefully truly shine through (ala the Martin St. Louis effect).

As of the morning of 1/4/22, the New York Rangers sat in first place in the National Hockey League. There is an opportunity this year to possibly make a run for it all not because of how they’ve won games so far but rather how they could possibly win games in the future. I do think there may be a way to do that, but it will require change that seemingly goes against their results. Some are called crazy when they try to fix something that isn’t broken, but if you believe that applies to 100% of situations, I’d ask you to re-read the Twain quote this blog started with.

Note: All data & ranking figures are via Evolving Hockey unless otherwise noted.