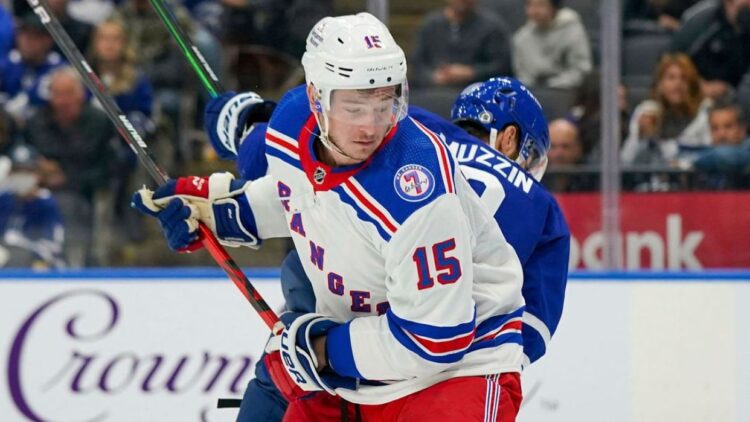 We have seen two completely different New York Rangers teams a mere two months into the season. Before Friday 11/12, NYR was consistently getting out shot & out chanced in 5v5 play to the tune of a bottom 3 team in the league, only banking points on the back of Igor Shesterkin and a top-10 power play unit. That was the concern with the last NY Rangers trends article from last month. Anyone who wants to pretend it was anything else is welcome to, but even Gerard Gallant admitted after a while they were winning games they didn’t really deserve.

Since then, however, key lineup decisions have led to the Rangers finding the form of a top 5-10 NHL team across the board, and the NY Rangers trends are way up. Certain forwards came alive while others were put in better positions to succeed, and the weakest defense pair consisting of Patrik Nemeth & Nils Lundkvist has played to a level that many of us envisioned when Nemeth was signed. Sitting in first place in the Metro and second in the entire league (as of SAT 12/11), life is good for the Rangers and their fans.

The true issue for the Rangers early on this year is that their scoring chance (expected goals for) creation was mostly non-existent at 5v5. The team defense (expected goals against) was still mostly there to an average or above average level, which did help them win a lot of one goal games, but without the offense waking up NYR was on a track for disappointment. Since the 11/13 game at Columbus, the Rangers have consistently generated offense at 5v5 to the tune of a top ten NHL team. When paired with basically top ten shooting & goaltending, you tend to win a lot of games. 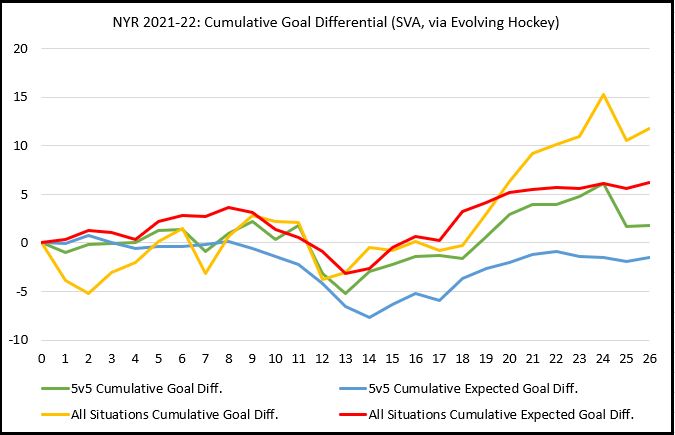 Before we move into the players, though, I would be remiss if I don’t point out the strong special teams of this Rangers team thus far (even though special teams only accounts for ~20% of the typical TOI of an NHL game).

Both the power play and penalty kill are top ten units when it comes to their respective tasks, per Evolving Hockey (expected goals for on the PP (5th), expected goals against on the PK (8th), both per 60). While it is a strength so far, special teams play can sway wildly within a season and especially year over year. The good news, subjectively, for the Rangers is that this PP unit has spent a long time together – so while they’ll likely go through a cold streak at some point, their above-average success should continue. And with Shesterkin supporting the PK, all they need to be is above average in limiting chances for some continued positive results there. 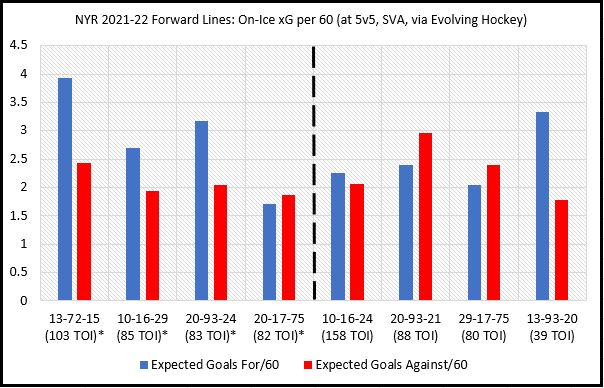 Note: Lines sorted by TOI left to right, and by current (noted by asterisk) versus former line combos.

To me, the turnaround of the offense was led by two major factors. First, the Artemiy Panarin & Ryan Strome line (originally with Kakko at RW) began having more of a positive impact on the game at 5v5. The line as a whole was running at a 42% xG clip as of 11/3, and by time the forward lines changed they had gotten back over 50%; a clear improvement over about two weeks or so.

Second, the choice to move Barclay Goodrow back down to the fourth line in while promoting Dryden Hunt was the correct move, even if it was overdue. Gallant & co. went a step further and broke up 10-16-24 to move Kakko up to with Kreider & Zibanejad. As a result, the first three lines have been creating offense at a well above-average NHL level (xG average/60 per game is ~2.4 this year for one team). When you couple this all with a fourth line that has been near 50%, suddenly you’re rolling 4 lines that are generating more chances than their giving up.

I titled my 11/4 piece “Searching for Balance” for a reason – Gallant & co. found that balance and they’d be keen to remember that if and/or when injuries do occur down the road this season. 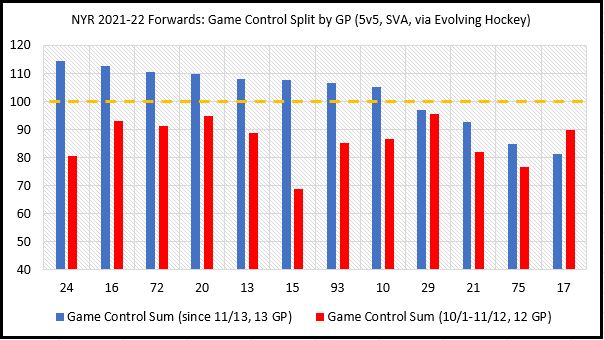 In terms of individual performance for the forwards, I have to highlight basically the entire top 9, but especially Kakko, Strome, and Chytil. Not that the rest of the top 9 have slouched at all recently, but those three have been arguably the most consistent forwards for the Rangers this year in terms of on-ice expected results. 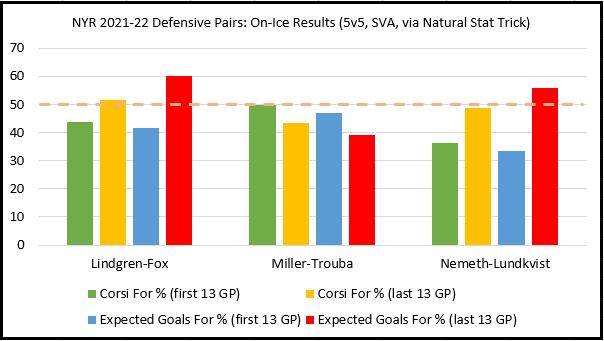 While the forwards have led the resurgence of this turnaround, it should be noted that we’re seeing a bit of a mixed bag on defense (more good than bad, though). Lindgren-Fox started the year right where they left off last year, but the last ~5-8 games of their first 13 took a turn for the worst. Since then, though, they’ve returned to dominant form and this makes sense given that the top six Forwards started producing more offense.

The start of the year for Nemeth-Lundkvist was downright miserable, but since that 11/13 game they have actually been a top-tier 3rd pair across the league (~56% xG). No one will confuse Nemeth for having offensive ability, but in watching him closely he seems to have settled in and has been very good at stepping up on forwards to disrupt a shot attempt or scoring chance. His breakouts don’t get much more creative than a simple pass or chip off of the glass, but it’s working. Nils, meanwhile, has not been overly noticeable in a good way. His positioning has seemingly improved and he is not making mistakes – and for a rookie Defenseman that’s all you can ask for. The scoring production will come with time.

The possible concern, seen for a long time by very few, is the Miller-Trouba pairing. After a decent to good start to the year, their play as a pair has slipped, and given that they’ve continued to play most of their minutes with the two top lines it’s hard to say that it’s the other 3 players on the ice with them during 5v5.

I’ll just explain it like this: K’Andre Miller might end up being a lot like Jacob Trouba during his NHL career. What I mean by that is Miller will more positively impact a game in the offensive manner (making plays that lead to offense or in the offensive zone itself) rather than defensive impacts (limiting shots & chances against). In their last 13 GP, Miller-Trouba has an xGA/60 of 3.08 (5v5, SVA, via Natural Stat Trick), which is about 50% worse than 55-23 & 12-27 during that same stretch.

In that same time period, there are 57 pairs of NHL D-men who have at least 100 TOI, and Miller-Trouba rank 54th in xGA/60 (same categories, via NST). They are simply not complementing each other at the moment, so why not try Miller-Fox & Lindgren-Trouba? The Rangers can always go back to the pairs as is if it doesn’t work. 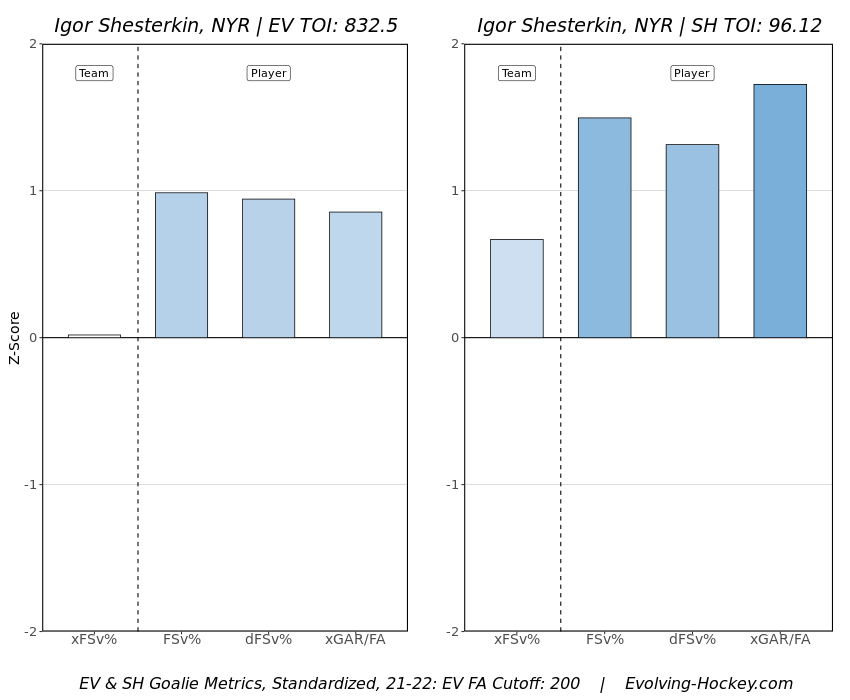 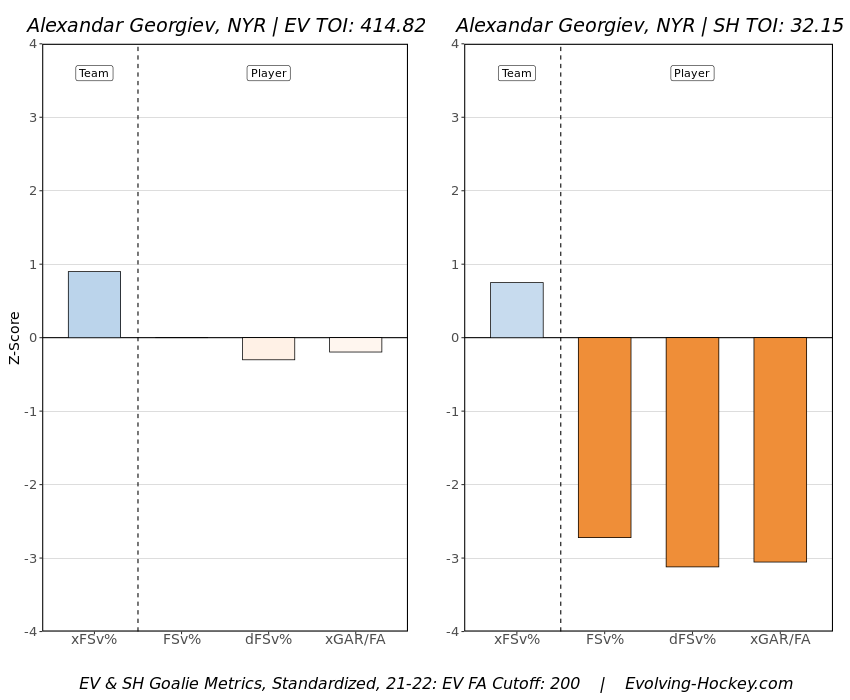 The goalie update is, per usual, relatively straightforward. Igor Shesterkin is real good – stay healthy my man. Georgiev, for all his faults, has played better at even strength with Shesterkin out (to the point where he’s an average goaltender on the season). The PK has been his true weakness, so NYR just needs to do what they can to stay out of the box with him playing.

If I had to give two things to look out for, it would be the play of Miller-Trouba and Dryden Hunt. I’ve spent enough time on 79-8 already, however the play of Dryden Hunt has been a pleasant surprise for the Rangers this year (aka he’s backing up his strong on-ice results from last year with the Coyotes). My only concern is that Hunt is likely not the long-term answer at 2RW for NYR. If that line begins to struggle offensively, I do think Gauthier and Hunt should flip-flop spots as a first move. Gauthier continues to generate offense by taking the puck straight to the net, and while the mix with Panarin & Strome would remain to be seen, he’s earned a larger look if needed.

Looking forward, I hope the Rangers don’t change much barring a bad stretch of play (i.e. 5+ games). Recently the schedule with back to backs and travel hasn’t been kind. They got back on track with generating offense at an above-average clip against the Sabres after some low-games against a newly-stingy Blackhawks team. Overall, NYR has had quite the turnaround – time to run with it.