The Rangers have an Alex Georgiev problem The story of the Rangers season so far has been the incredible play of Igor Shesterkin.  My esteemed colleagues on the site have chronicled the stolen points and impressive victories that have pushed the Rangers much higher in the standings than they rightfully deserve to be.  Back in August, I wrote about Shesterkin’s overall style and expressed my belief he was already one of the best goalies in the league.  It’s exhausting being right all the time.

The problem is that you can’t play Shesterkin (or expect this level to hold up) for 82 games.  You need to spell him once in a while and you need to feel confident that his backup can hold down the fort.  That’s really not the case at the moment.  At this point, I think it’s becoming fairly apparent that the Rangers have an Alex Georgiev problem.

Georgiev has appeared in just 3 of the Rangers first 13 games.  That’s just shy of a 19-game pace over the course of a full season.  In a vacuum, it’s not that crazy for Shesterkin to carry that type of workload.  After all, Henrik Lundqvist did it 8 times in his 15-year NHL career, including 5 of his first 6 seasons.  However, those early seasons of Hank’s career were a lifetime ago in NHL years, and goalie workloads have been managed differently in the more recent past.  For reference, Hank only shouldered that workload 3 times in his final 9 seasons.

The other significant issue is that Shesterkin has never approached that level of work at any point in his career.  Last season’s 35 games were by far his NHL career high, and that stopped just short of his KHL career high of 39 games in 2016-2017.  Usually, a topflight starter’s workload needs to be ramped up a bit over a few seasons.  In a perfect world, Igor would be looking at 55-60 games this season, especially if you want him fresh for the playoffs.

That means that the backup needs to be good for 22-27 games of reliable “give your team a chance to win” performances.  Right now, Georgiev shows no sign of being able to do that.

When Georgiev debuted back in 2018, I wrote about his game and there was a lot to like.  However, over the past couple of seasons, Georgiev’s technical foundation has steadily crumbled and his inability to make adjustments to his game have caused a severe issue for the Rangers.

His cup of coffee in 2018 was incredibly impressive and he showed very stable numbers and performance in his first full season in 2018-2019, playing in 33 games.  The wheels started to fall off after that.  Starting with his counting stats, Georgiev’s save percentage has steadily declined since his debut, with a solid .918 in his first season, then .914, .910, .905 and bottoming out .862 this season, with the obvious small sample size caveats.

Georgiev’s GAA has fluctuated a bit over the same period, but I’m willing to chalk that up to noise, given the uneven results during the rebuild under David Quinn.

Situationally, there appears to be some potential good news, given that Georgiev’s 5-on-5 save percentages have been relatively stable, only fluctuating between .908 and .914.  While these numbers aren’t particularly strong, it puts him on par with decent quality backups like Antti Raanta and David Rittich.

However, his short-handed save percentage has cratered the past couple of seasons, posting an .800 mark in the pandemic shortened season last year and .500% in his tiny sample this year. This is despite the Rangers having better PK%’s these past two seasons than his first two, in which he posted .920 and .931 marks shorthanded, respectively.

Given the fact that he has faced literally 70 shorthanded shots in his career, I can be convinced that this too, is sample size fluctuation.  The more alarming trend is the fact that he has been underperforming his xGA (expected goals) the past two seasons, which measures league average shooting percentages from various locations on the ice.  His GSAA (goals saved above average) has slipped each year from 5.28 goals saved above average in 2018-2019 to -.32, -1.3 and bottoming out at -4.27 this season (in a three-game sample!). 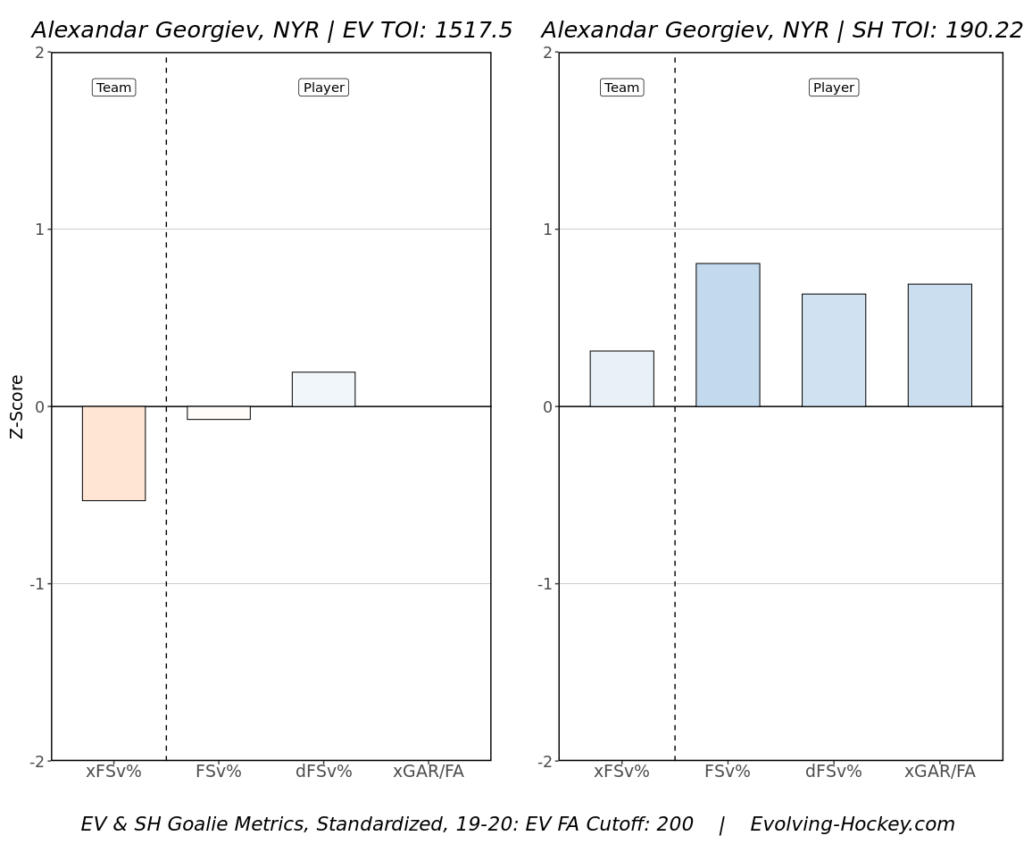 Looking at Georgiev’s last productive season in 2019-2020, you can see from the chart that he held his own at even strength while his team was getting the puck shoved down their throats.  He was also a legitimate asset shorthanded. 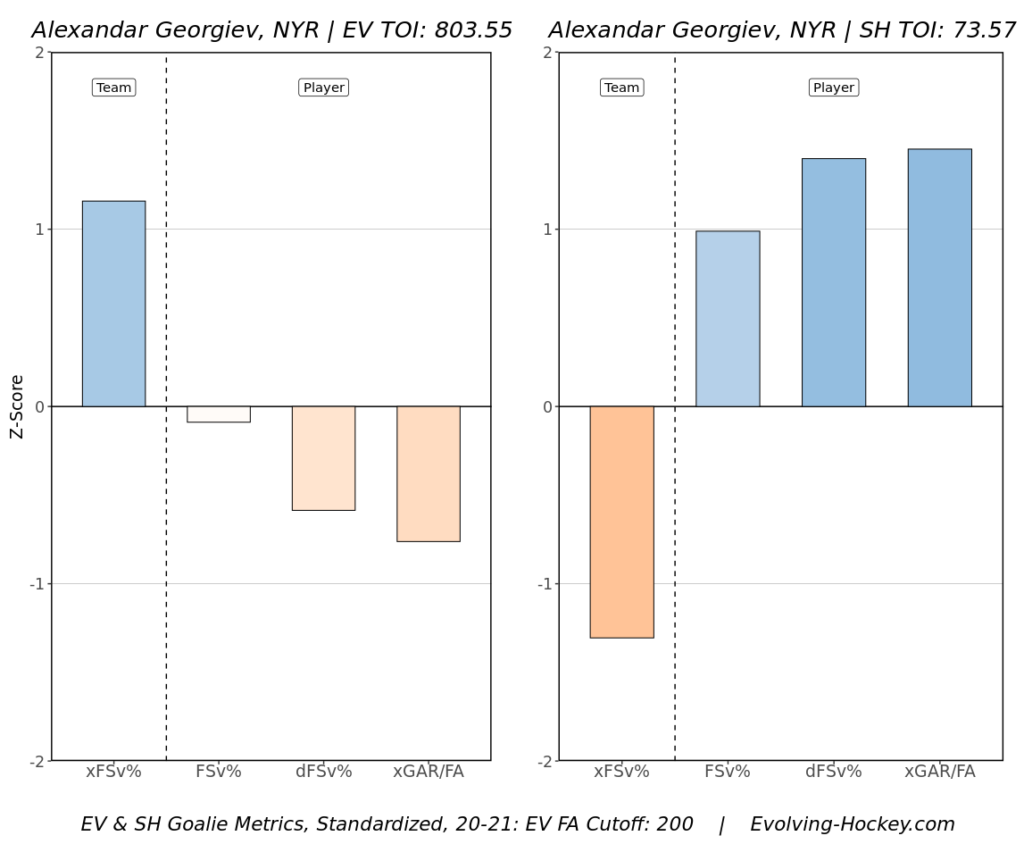 Moving on to the start of his real decline in play, in 2020-2021 Georgiev got absolutely ravaged at even strength, while he continued to perform well a man down. 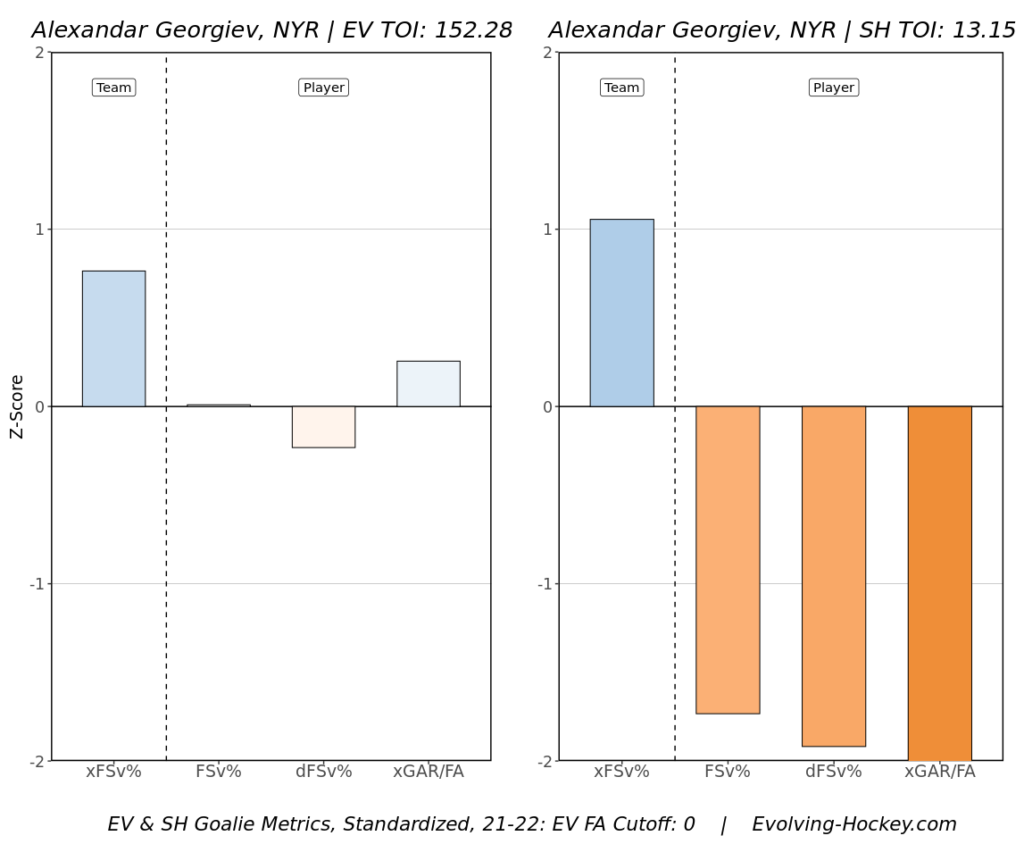 His play at even strength this season has improved, but he is getting killed on the PK.  We’re talking 5 goals on 15 shots here.  His performance has been dismal. 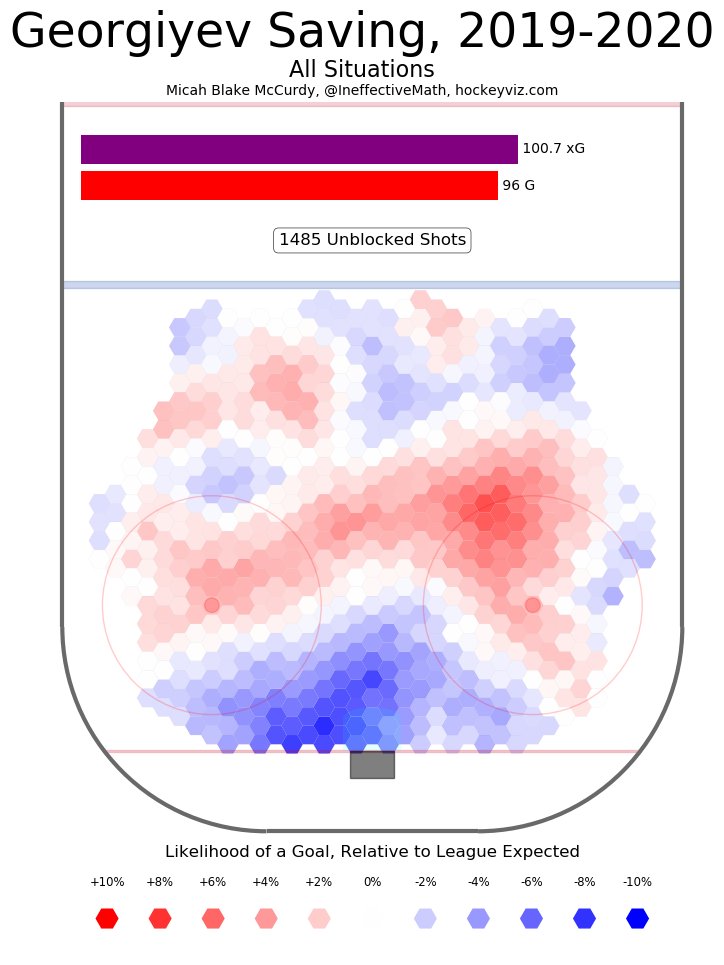 Turning to shot location data, in 2019-2020, Georgiev did a really nice job limiting conversions in the high danger areas in front of the net.  He gave a little more back in the upper areas of the slot, but ultimately, being able to stop those high-danger chances in front is a key skill for a backup. 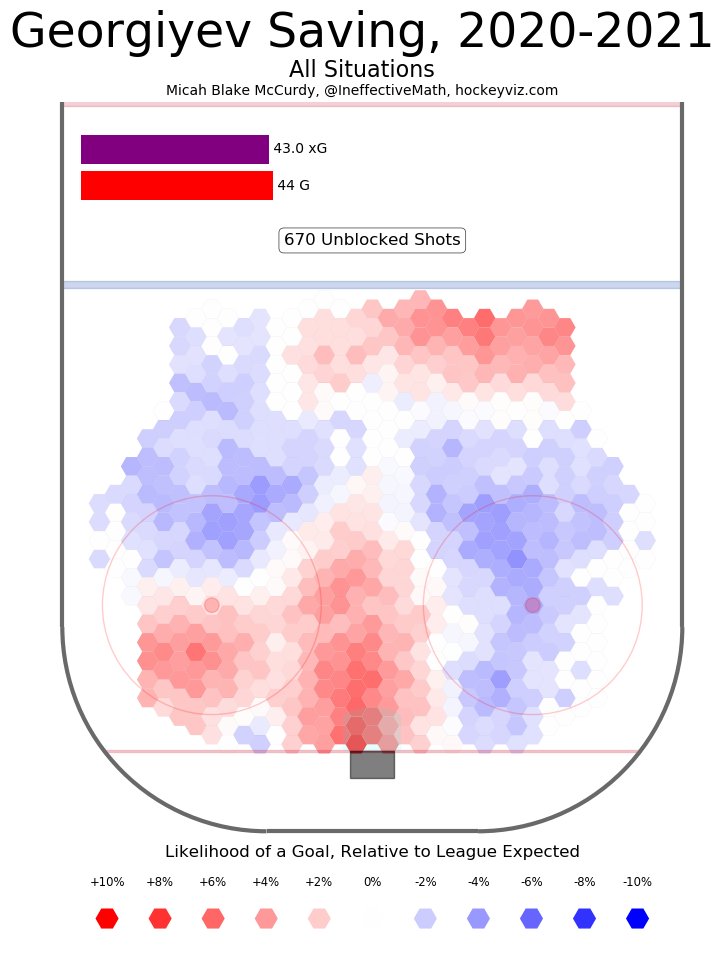 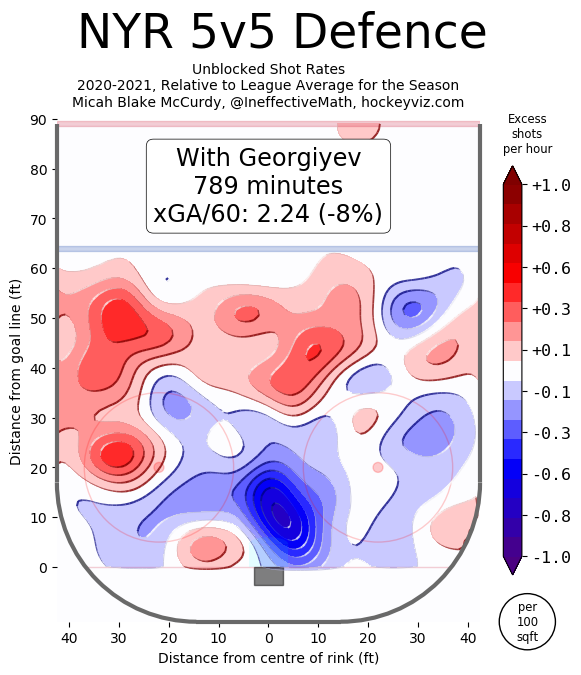 Moving into the next season, the wheels really fell off from a location standpoint.  Georgiev began hemorrhaging goals in front of the net, significantly above the league expected rate.  You can also tell that this is where his confidence began to falter on longer range shots, evidenced by the disproportionately high number of goals from the point. 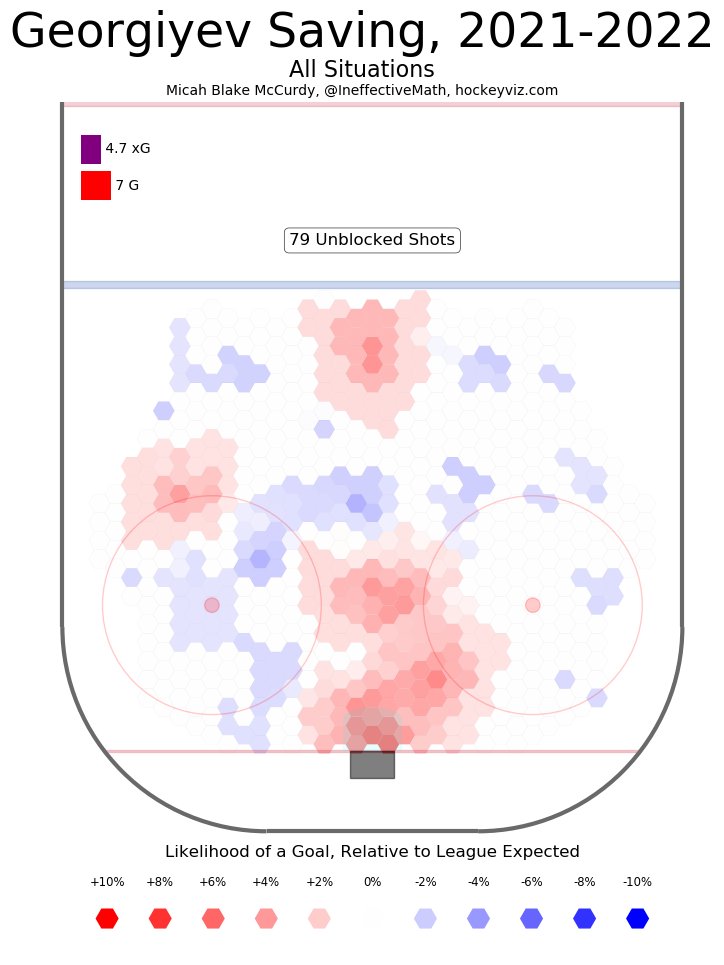 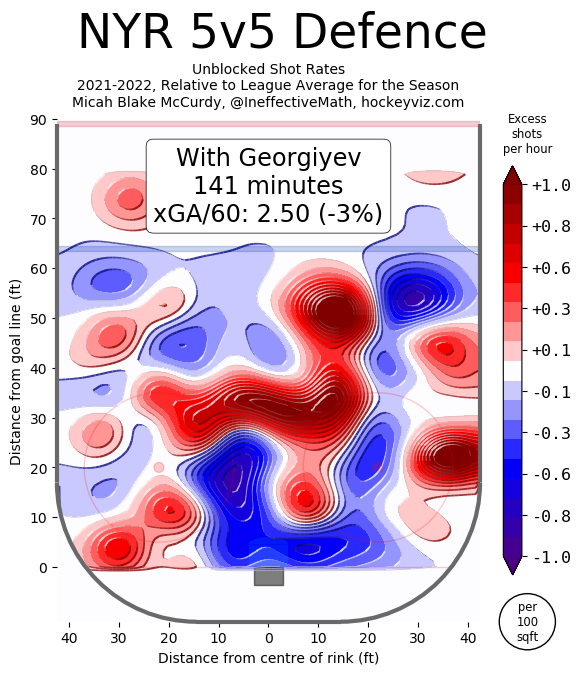 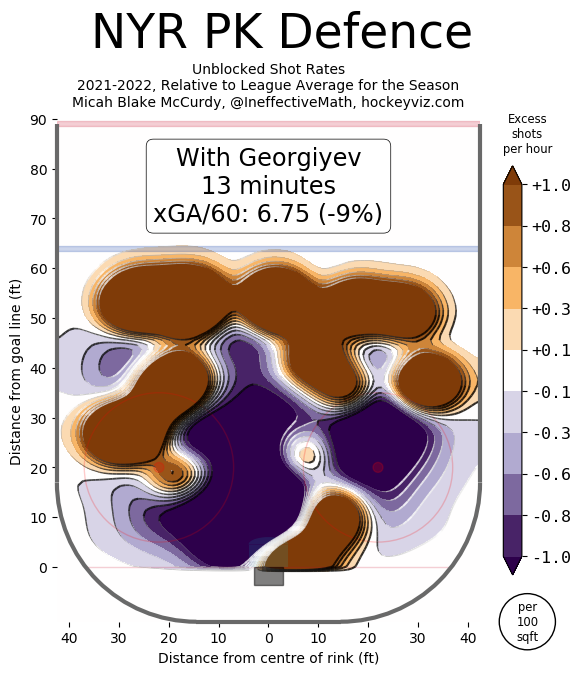 The biggest issue you will see in both the 2020-2021 (which is when his play started to precipitously decline) and the 2021-2022 season so far, is that his goal locations have disproportionately come from areas of the ice in which the Rangers have excelled at suppressing shots.  You can see where the team defense heat maps have mostly blue, Georgiev’s personal maps have mostly red.  This is tempered a bit by the Ranger’s PK giving up some low shots shorthanded, but it’s definitely an alarming trend.

There is no trust, yet

The current reality is also borne out by the fact that Gerard Gallant clearly doesn’t trust Georgiev.  In addition to simply not playing him very often, he has either been thrown to the wolves (Washington, Edmonton) or played against much weaker competition (Ottawa).  Looking ahead, it seems he will get one of the back-to-back with Columbus and the Devils (most likely NJ) but starting Friday with 4 games in the next 5 days and 6 in the next 8, Gallant is going to have to roll the dice to avoid burning out Shesterkin.

So, I suppose after 1,000 words or so, the obvious question is “can the Alex Georgiev problem be fixed?”.  I believe the short answer is yes, but given the technical mess that Georgiev has become, it’s going to take some work, and it may not happen without a change of scenery.  Benoit Allaire has had very few failures in his time in New York, but he has not seen the results he needs to see from Georgiev these past few years.

The other difficulty is the fact that the Rangers don’t really have much long-term goaltending depth available at the moment. Adam Huska is off to a decent start in Hartford, but there is no present indication that he is NHL-ready.  That would leave Keith Kinkaid, and I’ll just say it…no. No other realistic options exacerbates the Alex Georgiev problem.

That would leave the waiver wire, where there is typically an Aaron Dell or Anton Forsberg type available, but that is pretty uninspiring.  The other avenue is a trade, which likely won’t really open up as an option until teams can meaningfully assess their needs and contention status.  However, depending on Georgiev’s ability to put up at least league-average numbers, the Rangers may need to pounce if a decent waiver target becomes available.

The Rangers definitely find themselves in a tough spot at the moment, with their goaltending depth basically non-existent and zero production behind Igor Shesterkin.  This problem can be mitigated if the overall team process improves and provides some cover for its embattled backup, but if the team continues to hemorrhage shots at the rate they have so far, it could be another ugly season for Georgiev.  Good thing the Rangers are banking those early points.