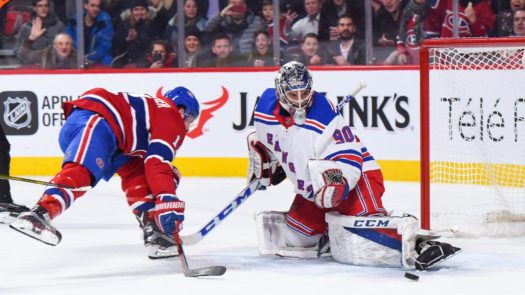 Last night, in an otherwise meaningless game, goaltender Alexandar Georgiev made his NHL debut, stopping 38 shots in an impressive performance.  The young Russian was originally an undrafted free agent who attended the Rangers prospect camp this past summer, after an impressive stint in the Finnish Liiga.  Georgiev didn’t come completely out of nowhere; he helped backstop Russia to a silver medal in the 2016 World Junior Championships.  So, what do the Rangers have in this young tender?  Let’s take a look.

Now, I am going to qualify this with the fact that this was only one game.  However, you can glean quite a bit of information from his technical abilities and project based on the observation of his physical tools.  I would certainly leave this discussion open for further analysis, but here is what I saw from 60 minutes of the young lad…

There was an awful lot of good.  Let’s start with his movement.  He is a balanced skater with solid edgework and quick transitions.  He plays (at least last night) at average crease depth and gives himself the ability to transition laterally with minimal exertion, keeping his lateral pushes short and clean.  If you caught the post-game last night, Steve Valiquette had a nice lay-term breakdown of what makes his lateral movement so effective, so check that out here.

To Valiquette’s point, his head movement guides his puck-tracking, driving down into his lateral slides, but using enough core strength to recover without overweighing or losing his momentum.  It’s a tricky balance, and the explanation sounds a bit technical, but let me try to explain.  When sliding in the butterfly, ideally, you would keep your weight balanced into the middle of your body, using your core muscles for power and your legs for direction.  When a goaltender needs to travel a greater distance or move laterally faster, the cheat is to use your body momentum to help force you across the crease more powerfully.  The downside to this is that you are no longer actively balancing your body with your core, and your body weight weighs down your recovery.  It’s a dead weight.  Georgiev uses his body weight to drive down to the ice when necessary but is body conscious enough to re-engage his core when he is recovering.

The drive down also reinforces your upper and lower body connection.  This is why the core engagement is so important.  If your upper and lower body are disconnected, you open up holes above your pads and below your hands.  The only thing that brings your body together like that is your core muscles.  This motion of driving down toward the shot ensures that connection is maintained.

For a better idea, check out this GIF from our friend Shayna (who is a must follow by the way @HayyyShayyy).  As you can see on the first push, Georgiev has to drive more power in to the slide because of the distance.  You can physically see the weight he is driving into the ice looking for the seal if the shot beats him to the spot.  You will also notice, that on the transition back to the center, the distance he is covering is much smaller, so his slide is shorter and quicker, and noticeably less weight driving into the ice.  This is only possibly because he re-engaged his core once his original slide was complete and was able to remove that weight from the ice surface and create less friction on the way back.

Now, let’s take a look at his post-integration.

It’s a little tough to see in this GIF, but Georgiev’s post integration is solid and smooth.  When I say post-integration, I am talking about his ability to slide from a puck-facing angle to a posture of protecting the side net on the dead angle.  The technique Georgiev is employing is refered to as the “reverse VH” or “RVH” for short.  The goal is to create a seal with the toe of the pad to the post and rely on a leaning technique to seal the upper portion of the net.  The post then acts as an anchor you can push off of to reengage your angle.  This example is especially difficult because the play transitioned behind the net quickly, and he had to integrate on the opposite side from his body momentum.

Despite all these technical skills that Georgiev possesses, the most important take away I had from watching him last night was the patience in his movements.  He is compact; he doesn’t have much in the way of excess movement or a tendency to become overly aggressive as the play breaks down.  These are very difficult skills to teach as there is a huge mental component to them.  The fact that at 22 years-old that foundation is already in place makes it easier to improve the other facets of his game.  Check out these two GIF’s below:

In the first GIF, he is facing down a broken play and potential 3-on-1.  There is a moment of hedging, as you can see his feet spread a bit as he is tempted into the butterfly.  He recognized the drop pass, made on quick shuffle step over and executed his save.  He then re-engaged his core and slide into the path of the rebound.  Textbook.

The second GIF to me is actually more impressive.  You’ll notice that as he engages the post, you can see Georgiev sneak a look at the slot to see the attacking player bearing down.  Knowing he is there is a huge piece of this save.  One he recognizes the target, he leads with his eyes and drives down into the ice to close any holes on the in-tight shot.  The rebound was a bit dangerous, but that is a product of the proximity of the shot and he was still in position to deal with it, post-recovery.

Now, I don’t want to give anyone in the impression that I am talking about the second coming of Henrik Lundqvist here.  I wanted to highlight the technical skills that Georgiev possesses, because it supports my overall impression of his abilities.  This is not to say his technique does not have its faults.  They aren’t major and are certainly correctable, but Benoit Allaire will have to be very cognizant that sometimes when you correct a technical flaw, you may take away something that helps another part of his game work.  I’ll explain more in a bit.

As I mentioned above, Georgiev is a strong skater with good edgework and lateral movement.  However, when he is moving laterally up high, he tends to have a narrow base to work with and widens out when he sets in his stance.  This opens up a couple issues.  First, it creates a bit of a “bobbing” motion when he is shuffling laterally.  This happens because with each step, he needs to be ready to engage the shot.  In order to do this, his naturally higher body position needs to drop down, and then pop back up to move again.  Second, if a shot comes through traffic when he isn’t engaged with the shot, you could find some goals sneaking through if he is tracking them properly. If you look at the first GIF in the post, you can see this a bit in action.  It’s nothing more than a hitch in his movement, and I’d be confident that Allaire could correct it pretty easily.

While Georgiev’s post-intregration is well executed, his recoveries out are a bit choppy.  The transition in and out of the RVH is almost rhymic, with a rocking motion your body uses to reengage your edges.  It looks to me like Georgiev is only relying his body strength to force his way out of this pose, without assistance from the post or his momentum.  Again, correctable.

His setup in his stance and general standing lateral movement is also a bit rough.  I could just be spoiled by watching Henrik Lundqvist for the past decade, as he is on a different level.  Now, when I mentioned above about correcting something and inadvertently taking something away, this is what I am talking about.  The hitches and minimal noise in his movements could very well be where his power is generated from.  You could quiet him down to the ideal extent, but you could rob him of some explosiveness, which could create noise in other areas.  Allaire should tread a bit lightly here and experiment with some different advice.  There isn’t nearly enough of an issue here to look for wholesale mechanical changes.

I agree with Steve Valiquette in what I saw is an NHL-ready goaltender play last night.  What was most impressive was that many young, athletic goaltenders tend to overextend their movements and rely too much on their athleticism to properly create technical consistency.  Depending on his ability to implement the technical tweaks I outlines above, he could project out anywhere from very useful backup to fully capable NHL starter.  Consistency will be key.

When Benoit Allaire took on his most successful projects in Cam Talbot and Antti Raanta, he saw raw talent and a strong need for re-vamped mechanics.  With Georgiev, the technical foundation is in place already.  This is a big head start, as they can concentrate on preparation, consistency and technical maximization.  Barring a complete erosion of his skills before the end of the season, I would be comfortable with the organization penciling him in as Lundqvist’s backup next season, unless a crazy bargain falls into their lap in free agency.

*All GIF’s from @HayyyShayyy