What is wrong with the Rangers offense? 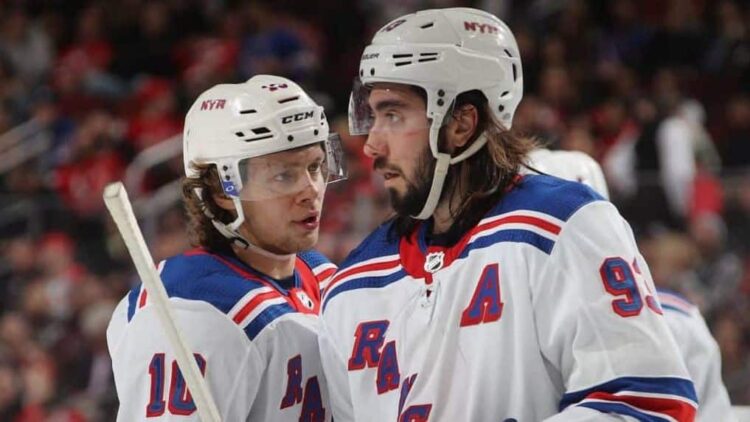 Through seven games this season, the Rangers are 4-2-1, but it hasn’t necessarily felt like a 4-2-1 team. Goaltending and overall team defense has been there, but the offense simply hasn’t been. We know Artemiy Panarin has been off, and that will impact the overall offense. But there’s a deeper dive into this. What exactly is wrong with the Rangers offense?

Generating scoring chances is down at even strength

The first thing to note is that the Rangers are having issues generating offensive chances. Their xGF/60 right now is 2.05, 23rd in the league at 5v5. This, compared to last year’s 2.06 xGF/60, is actually the same for the season long numbers. A caveat to this is the Rangers were absolutely atrocious to close out the season, which impacted their season long numbers. This adds some context, and also some hope that this year’s even strength numbers will improve throughout the season.

The powerplay, on the other hand, is a completely different story. The Rangers, this year have an xGF/60 on the powerplay of 7.61. This is compared to last year’s 7.5 xGF/60, which was a top-five producing powerplay for the season. So the powerplay is still generating chances, while the even strength offense is not.

Since the majority of the game is at even strength, this is certainly a problem for the Rangers. However the powerplay simply isn’t scoring either, converting on just 11.5% of opportunities, 29th in the league. If you’re looking for a disaster scenario for what is wrong with the Rangers offense, this is it.

The good news is that it’s still way too early for any weight to be placed on these numbers.

All data from naturalstattrick.com.

Shooting is also a major issue. The Rangers simply aren’t finishing their chances. This year, the Rangers are shooting at 7.94% in all situations. Last year they shot 10.95%. That is a full 3% difference. Over 189 SOG this season, that 3% accounts for a net goal difference of 5.67 goals. Imagine where the Rangers would be with their five extra goals?

This is from podcast guest Jack Fraser. It is from all situations, and it confirms the math above. The Rangers, while still struggling at generating chances at even strength, are mostly being impacted by horrendous SH%. If I recall the old GVT stat correctly –and for the older stat folks, please keep me honest– six goals was one win in the standings. So the 5.67 goals is about one win, or two points, in the standings. It’s not an exact science, but it paints a picture.

The good news is two-fold:

The Rangers have significant high-end talent in Artemiy Panarin, Mika Zibanejad, Adam Fox, and Alexis Lafreniere. They also have solid secondary scoring in Ryan Strome, Kaapo Kakko, Chris Kreider, and some of their tertiary players.

It is also insanely early in the season. It is way too early to be panicking.

Zibanejad is making up for it with assists, but Panarin has looked lost to start the season. He’s very clearly off his game, and it’s impacting the entire lineup. Until he figures things out, shooting and chance generation at all strengths will be a problem.

The other bad news is that this will take time. There is no need to panic, throw in the towel, or blow up the team. The message has been to wait and see what the team looks like by Thanksgiving. There are a lot of moving pieces this year, and we won’t get a true read on the team until then.

So what is wrong with the Rangers offense? Right now – just shooting percentage and waiting on their top two players to get it going. Both will work themselves out at some point. But for now, the Rangers have managed to bank some points. It hasn’t been pretty. The optimist in me sees this team figuring it out by Thanksgiving and then going on a run.