Rangers, Shesterkin closing in on extension 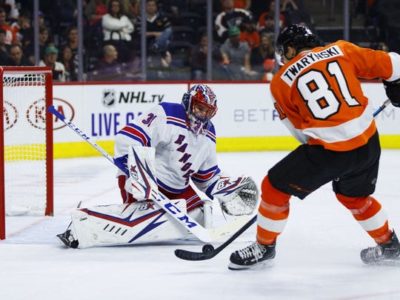 One interesting little tidbit that came up yesterday was that Igor Shesterkin was not one of the players to file for arbitration. That hinted a contract extension could be on the way. Vince Mercogliano noted that a Shesterkin extension is in the works at around $5.75-$6 million.

It sounds like the 25-year-old goalie and the #NYR are getting close on a new deal in the $5.75 mil-$6 mil AAV range. Kinks to iron out, but confidence it's happening.

Term wasn’t mentioned, but given the dollar amount, this is likely a long term deal. We had previously theorized that Thatcher Demko’s $5 million contract would be a baseline for Shesterkin, and it looks like that is the floor. Shesterkin has better NHL numbers and also dominated the KHL. He has more of a pedigree and track record than Demko, so it’s deemed a little safer. It wouldn’t surprise me if the Rangers have his deal expire after 2026-2027, when both Chris Kreider and Barclay Goodrow have expiring contracts. It seems that’s the cutoff for a lot of things with the Rangers lately.

In that case, the six year deal would take Shesterkin through his age-31 season. It would also buy four years of unrestricted free agency, which also impacts his AAV. Since Shesterkin didn’t file for arbitration, it seems this deal is relatively imminent.