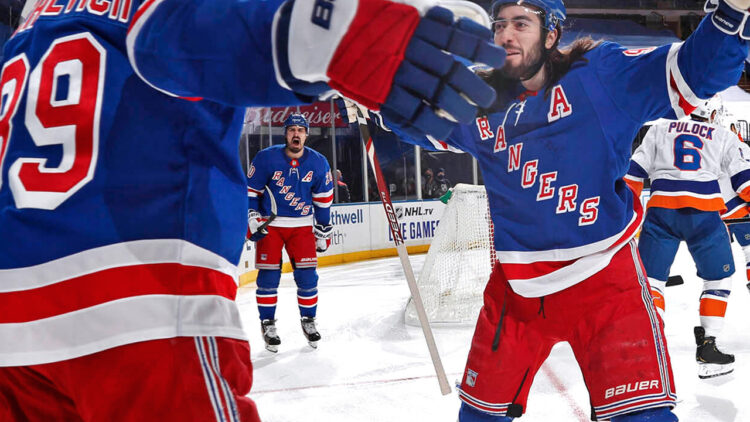 On the surface, the NY Rangers traded top line winger Pavel Buchnevich for peanuts. The return of Sammy Blais and a 2nd round pick has been widely panned as a bad trade for the Rangers. But this trade goes beyond just the surface. Following the trade, Rangers GM Chris Drury sold the trade as clearing much needed cap space. Given the news that the Rangers were going to walk away from Buchnevich at arbitration regardless, it seems the Rangers made up their minds long before asking about Buchnevich’s contract demands. They lost all leverage even before trying to trade him. Leverage aside, this was a move made for one reason: A big ticket trade. Without that big ticket trade, the Pavel Buchnevich trade was pointless.

When Jeff Gorton and John Davidson were unceremoniously canned after the Tom Wilson incident, it was sold as James Dolan being unhappy with the rebuild. The Rangers should be a win now team. If you still believe that, then I have a bridge to sell you.

But this isn’t about why Gorton and JD were fired, it’s about whether the Rangers are truly going for a win now approach. Trading Buchnevich to free up cap space for Jack Eichel, or Aleksander Barkov, or whichever big ticket center you dreamed of, is a win now approach. The Rangers will be banking on the kids –Alexis Lafreniere, Kaapo Kakko, etc– to step up big time offensively, so there’s risk, but it’s worth it to land a top-ten center in the game when healthy.

To just trot out the same four centers as last year doesn’t scream win now at all. It’s just a lateral movement with different role players. This was a team that just had to improve the fourth line and third pair to make significant improvements. They didn’t have to make wholesale changes. Trading Buchnevich signifies a wholesale change that just hasn’t happened yet.

Without this big ticket move, the Rangers will very likely dress Mika Zibanejad-Ryan Strome-Filip Chytil-Kevin Rooney down the middle. Maybe Barclay Goodrow gets in there with Chytil moving to the wing. The center depth is fine, but the wing depth would certainly be needed to prop them up. They could certainly use another bonafide top-six winger as insurance in this situation.

If there is no Eichel or comparable move coming, then the Buchnevich trade, as sold to us, was pointless. What purpose does it serve, if not to clear cap space for a big contract? Sure, there’s an argument for Lafreniere and Kakko getting ice time, but that also means Vitali Kravtsov is being banked on as your 2RW. For a team that says kids need to earn their ice time, that’s a big jump for all three. Can they handle it? Probably – but what if one of them needs third line, sheltered minutes? Goodrow isn’t a scorer, mind you.

It seems that Drury and gang backed themselves into a corner with a decision made in a vacuum instead of with the bigger picture in mind. At least, that’s what it seems like given what has been leaked thus far. They made the decision to trade Buchnevich regardless if they got Eichel. While they still appear to be the front runners, nothing is guaranteed. In doing so, they risk not getting him and losing a top-six winger for a minimal trade package.

There’s a strong argument that the Rangers would have gained more in a win now approach by just keeping Buchnevich following arbitration and letting him walk via free agency. At the very least, you get a valuable winger and added depth on a team that should make the playoffs this year. That’s worth more than a fringe winger and a second round pick.

It made them worse

Bear in mind that the concept of trading Buchnevich isn’t pointless. It’s the return and lack of a follow up move to date, given the supposed direction of the team, that makes the trade pointless. Make no mistake, this is a trade that was a step back for a win now team. They might have taken five steps forward with the depth moves made (Nemeth, Howden), but they only gain four steps when you factor in the Buchnevich trade. As of the writing of this point, the Buchnevich trade was pointless. A follow up move is needed, or this was a colossal waste of an asset.