7 Thoughts From 7 Days: On Gallant’s and Drury’s press conference 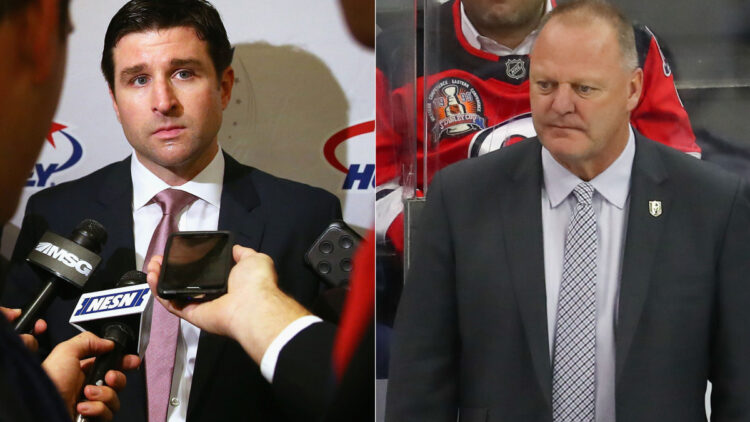 For a couple months, I’ve been piggybacking off Elliotte Friedman and our own Brandon Cohen on this weekly thought post. While I’d usually do these ad-hoc, I liked the idea of consistency and a common theme. This week, let’s talk about yesterday’s press conference and Gerard Gallant’s and Chris Drury’s statements.

1. The first statement from Gallant that caught my attention was how he wants the Rangers to play. He wants the Rangers committed to playing an aggressive game, and said there was no reason why the Ranges shouldn’t be able to play the same style he had Vegas playing. That means an aggressive 1-2-2 forecheck and a strong neutral zone presence. This is the first step in being more difficult to play against. Full team buy-in to an aggressive system, instead of backing off all the way to the tops of the circles. Everyone knowing their role goes a long way as well.

2. Both Gallant and Drury expressed their desire to have the Rangers make the playoffs, and gave the current roster a vote of confidence. All the talk about adding grit and toughness doesn’t necessarily mean major roster moves are needed, and the confidence from Gallant and Drury show that. Of course it doesn’t mean major moves won’t happen, they just don’t necessarily need to make the trades. The vote of confidence shows that the Rangers really are on the cusp, and this isn’t a surprise. They have great skill, and it was just a few depth holes that needed to be filled. Point #1 plays a role in this as well.

3. This quote from Drury was interesting:

When asked if changes need to be made to the roster, Drury said this:

"It's hard not to watch these playoffs and notice the physicality, the energy, the effort, the intensity that it takes to win.. And we're certainly going to need to play that way to have success."#NYR

This is a great non-answer to the question. What Drury said was the Rangers need to play a certain way to win in the playoffs, not that they need to make changes to the roster. This plays into point #2 above. It was more a statement about the system, not the roster. This again leads me to believe that despite all the talk about adding gritty players, the most important thing was fixing the system and getting full team buy-in to playing more aggressively.

As an aside: I know I post a lot about which players are available and could they fit with the Rangers. Not every player posted about means I think the Rangers should go after them. Otherwise this team would be making trades weekly. It’s more to get the discussion going. The Rangers will likely kick the tires on Matthew Tkachuk, Jack Eichel, and any big name. But I stand by my statement that the Rangers don’t necessarily need a big trade this offseason. However if they are to make a move, this is the offseason to do it.

4. The above statement from Drury really is an indictment of David Quinn, which is interesting given how instrumental Drury was to hiring Quinn. There were quirks about Quinn that didn’t mesh with the veterans, specifically needing to go full speed to every loose puck instead of reading the play and trying to be aggressive in other means. That’s a quirk. The system itself, backing up in the neutral zone and on defensive zone entries, was the major issue.

This is also what Drury means by playing aggressively and with more energy/effort. It’s not that the players took time off, which they are human and they will take a shift off here and there, it’s that the system made it look more like they were passively playing. And they were! Constantly backing off in the neutral zone was a point of contention for me the last three years. It was a problem. Gallant will fix that problem.

5. Both Gallant and Drury made a point to mention the need to name a captain. It is certainly long overdue, but I can see why the Rangers went so long without one. It was a team without an identity and without a true set roster. Now that the roster is taking shape and, hopefully, an actual identity is being formed, it’s time for a captain. We will go into more detail about who we think could be named captain in a separate post. Gotta spread out that content a bit!

6. Something that should be music to people’s ears:

Gallant on his philosophy for developing young players:

"You give them the opportunity. Hopefully they take advantage of the opportunity and the ice time they get and excel with it. I don't think young players can sit on the fourth line and get a lot out of that."#NYR

Young skill players on the fourth line has been a frustrating piece of watching the Rangers for a while. It happened days after Quinn said Vitali Kravtsov isn’t a fourth line player. We saw Kaapo Kakko on the fourth line. Julien Gauthier spent way too much time there as well. That’s no slight to the fourth line, it’s just perhaps a misuse of development time.

This also plays into the roles that each player will have. The fourth line will have a role, and it will likely be a defensive line that can score here and there. That means solid two-way hockey with a focus on limiting chances against. That isn’t the best place for a skilled young player to develop. It doesn’t mean that these kids won’t spend time there, it just means they won’t toil there forever.

7. Some other specifics: No word from Gallant on assistant coaches, or Drury on an assistant GM. Expect those roles to be filled before free agency. Assistant coaches may play a role in attracting certain free agents. I say before free agency because despite the scouting and front office turnover, the reports have been filed and an approach has likely already been determined. The work for the guys who have left is complete. There is no rush to fill the front office roles. It’s about getting the right people, as scouting is a critical piece of keeping the pipeline flowing.