Can the Rangers and Flames sync up on a Matthew Tkachuk trade?

One of the more interesting rumors to come across this offseason has to do with the Calgary Flames. There were already rumblings that if they can’t land Jack Eichel, they may look to tear it down. Now there may be another rumor that Matthew Tkachuk may want out via trade.

First things first, know your sources. This is Shane O’Brien on a Steve Kouleas podcast. Neither of these sources have ever broken anything. However, people that cover the Flames have said the Flames could explore a rebuild. That could be spitballing or wishful thinking,

Who is Matthew Tkachuk?

Diving into who Tkachuk is as a player, he’s essentially what the Rangers would want if they are going to add young grit that is also tremendously skilled into the lineup. Tkachuk, 23, is a talented RW with an edge to his game.

Over the last three seasons, Tkachuk has been hovering at a little less than a point per game, with a career best 34-43-77 three seasons ago. That may seem like a long time, but Tkachuk was 20 when he did that. In the right situation, he could easily top that.

He’s also a very good agitator. He’s so good, in fact, that he has an entire YouTube video called “Matthew Tkachuk Pissing People Off,” which of course you can watch above. Think Sean Avery, but infinitely better. This is the kind of kid that fits the mold of what the Rangers are rumored to want to add to their lineup. 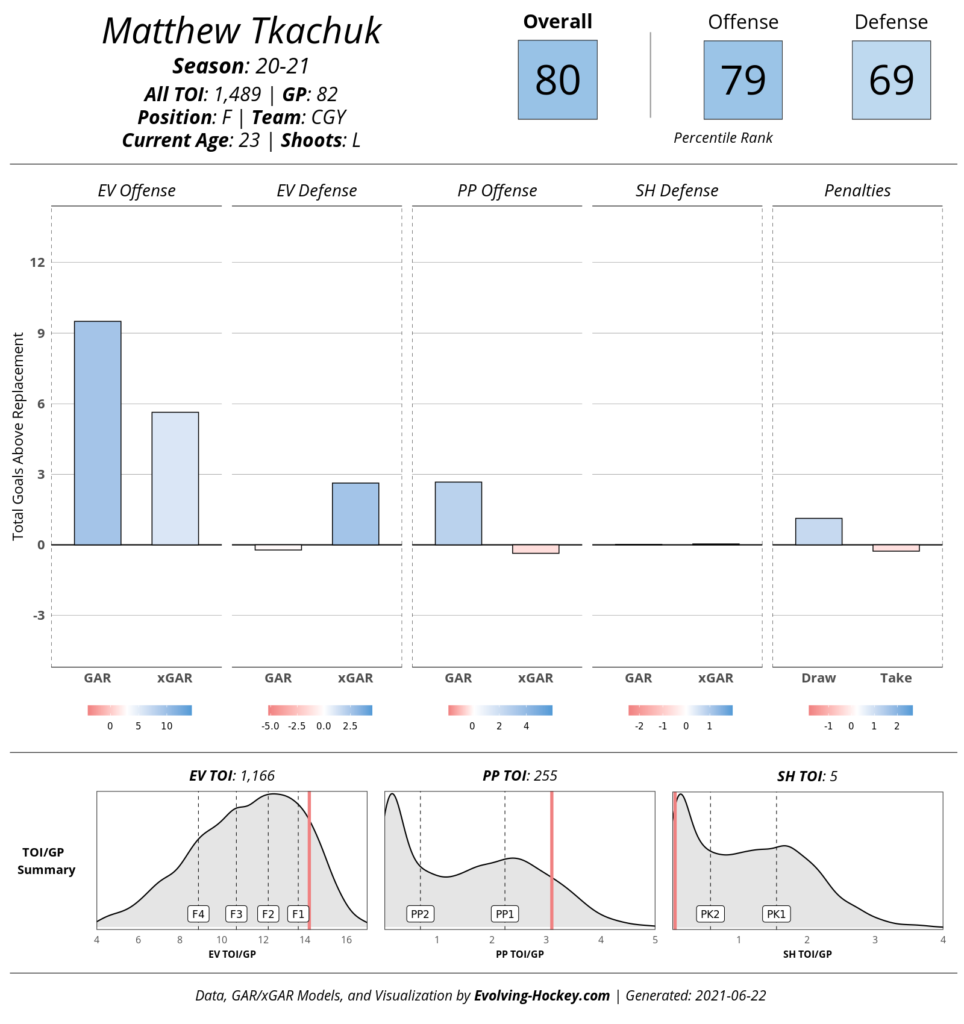 The thing is, Tkachuk is very good too. He’s not just putting points up, he’s been a play driver on both ends of the ice. He’s a complete three-zone player with offense that also is a net-positive in the penalty department. There are few players in the league like Tkachuk. He’s the answer to Tom Wilson, and he’s not the overreaction that someone like Ryan Reaves might be.

The issue with Tkachuk is two fold, and neither are on-ice concerns. The first is the contract. The $7 million cap hit is neither here nor there, it’s the $9 million cash due for this year. That makes his qualifying offer $9 million in the offseason, when he’s 24 years old. He knew what he was doing with that contract.

If he has a down year, the Rangers are forced to let him walk to free agency, as they won’t qualify him at that rate. If he has a career season, perhaps playing with Artemiy Panarin, then that next contract is a doozy. You always pay your stars, and there are certainly ways around it, but that is a lot of money in a qualifying offer.

The other concern is trade cost. Tkachuk isn’t exactly an aging veteran, so he could still be a viable piece in a Flames rebuild, if that rumor is true. I floated the potential for Kaapo Kakko straight up, and I think that matches in terms of pure value. Whether or not Calgary wants that as a return or the Rangers want to do that is to be seen.

There’s also the potential for quantity of lesser quality than Kakko. That means the #15 pick, an A prospect, and a sweetener. It’s actually interesting to see what Tkachuk, if he’s dealt, gets in a trade. Will it be more than Jack Eichel? Less? It’s a very interesting comparison to watch.

In the end, the Rangers will likely at least kick the tires on this Matthew Tkachuk trade rumor. It makes too much sense given what we’ve heard already.

I leave you with this. What if the match is with both Tkachuk and Elias Lindholm?