How the Rangers fix their grit problem 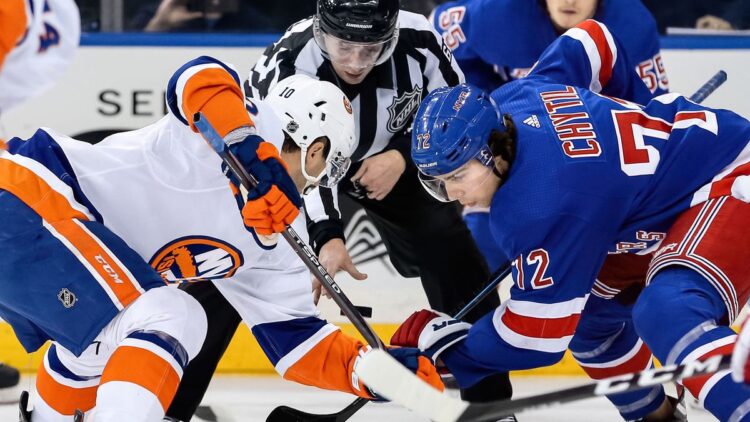 It’s no secret the New York Rangers roster was constructed with elite young, projectable skill. High-end draft picks and some savvy trades supposedly have GMs and fellow suits around the league envious of the talent up and down this roster. However, given where the Rangers  sit on the bell curve, they ended up lacking sandpaper and grit in their forward corps. There was nothing wrong with this per say, as the team has been in the process of rebuilding, and growth stage rosters typically aren’t flush with grinders and gamers.

With that said, the speculation around the firings of Jeff Gorton and JD intimated that Dolan wants to wrap up this rebuild and start competing for Cups. If the Rangers are to take that next step, this offseason and perhaps the next trade deadline would be the time to address the need for grinders and power forwards.

The challenge for Chris Drury is that the Rangers also have some decisions to make at the center position with Zibanejad and Strome both out of contract next summer. The issue gets compounded with the fact that most power forwards and heavy forecheckers play on the wing. Rarely can you grab centers that play that style of game without it costing an arm and leg.

For now, the focus will likely be on acquiring some meat in the middle of this lineup.

Other than the fantastic hockey name, Barclay Goodrow is the exact type of bottom six winger Drury should be targeting this offseason in free agency. While he has only put up 93 points in 300+ NHL games, he can play hockey.

Goodrow plays 14 mins a game in Tampa and was given 12+ a night in San Jose. He also doesn’t cost you puck possession. He has a career 52% CF at even strength despite getting most of his starts in the defensive zone. Cooper also deploys him on the first unit of their PK. That matters.

Zach Hyman is an extremely versatile player who has seen his ice-time and points production increase with each season. He has put up 0.75 pts per game the past two seasons and will likely get a hefty raise on the open market.

Given the fact he is one of the best forecheckers in the game, can play all situations, and will cost nothing but money, he could be prime target this offseason. Most in Toronto consider him to be the glue guy who digs pucks out for the Matthews’, Marner’s, and Tavares’. As a top line guy entering free agency at age 28, he surely won’t come cheap.

Josh Anderson is a 2nd or 3rd line right winger who can pop 20 goals a season for you. He can also hit, forecheck, and get into the crease. He’s essentially a younger, cheaper version of Chris Kreider.

Montreal locked him up last year with a contract that runs through the 2026-27 season, which is a concern. However, the Rangers are the buyout kings and could play that card if they have to down the road.

The only question mark with trading for Anderson is that Montreal gave up Maxi Domi and a 3rd for him last October. They might not be willing to part with him this soon after his acquisition and extension. However, stranger things have happened in the NHL.

Given his age and history of putting up points in this league (around 0.8 pts per game), Tkachuk wouldn’t come cheap. However, if there’s any player worth throwing the kitchen sink at, Matt would be it.

He’s one of the rare power forwards in this league that can hit, score, make plays, drive possession and scoring chances. He can play either wing at EV or on the PP, which is where we need him. He’s an RFA after next season, so perhaps that makes him slightly more acquirable.

Who can the Rangers trade?

The Rangers have an abundance of defensive prospects (Lundkvist, Jones, Schneider, Reunanen) that they can package and move for either a center or a grinder or both. Lauri Pajunemi (RW) put up almost a point per game in the Finnish league. He could either be trade bait or make Vitali Kravtsov available. Neither player projects to be a first line power forward, so I’d be comfortable moving either.

Filip Chytil didn’t take the major step forward I had hoped for in year three. However, I don’t think Quinn utilized him correctly. His average time-on-ice somehow went down this year, despite him putting up more points per game than last year. I also don’t think his future is at center given his inability to win face-offs or play two-way hockey. His best bet is probably on leftwing, which isn’t a position of need.

Obviously, the list of gritty players for the Rangers to target will be longer than this. Barring what they do with Quinn may dictate where in the depth chart the Rangers focus on. Either way, the roster as it stands needs upgrading if we are going to make a run next year. This is lining up to be a fun summer. Stay tuned.