I’ve said this a lot during the 2021 season but I’ll say it again, I was wrong about Ryan Strome. And I’ve never been happier to be wrong. Last season, the numbers suggested that Strome was obviously producing more because he was paired with Artemi Panarin. The numbers also suggested that when apart, Strome’s numbers fell off a cliff. This year, he stepped up his game, and there was no statistically significant difference between his number with Panarin and without. It was truly great to see.

This season, Strome played in all 56 games and put up a line of 14-35-49, good for an 82-game pace of 21-51-72. That’s not quite last year’s ridiculous pace, but again that wasn’t a realistic ask. He’s also become a vocal voice of reason in the locker room, and his quotes have been a source of relief for a lot of people. Not bad for a flier swap of Ryan’s a few years ago.

It’s beyond the points

Strome had arguably one of his best statistical seasons to date. 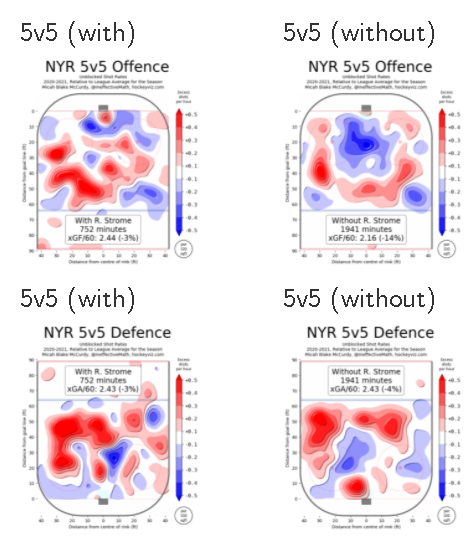 There is certainly room for improvement, especially since like with Mika Zibanejad, the offensive impact with Strome on the ice is still below league average. It’s not a big deal though, especially since Strome –and the top six in general– has been putting up the points to warrant a slight dip.

That said, the team is 11% more efficient on offense with Strome on the ice than without. The defensive impacts are negligible, but he’s holding his own. Again with offensive numbers like these, you generally overlook some of the slight deficiencies. 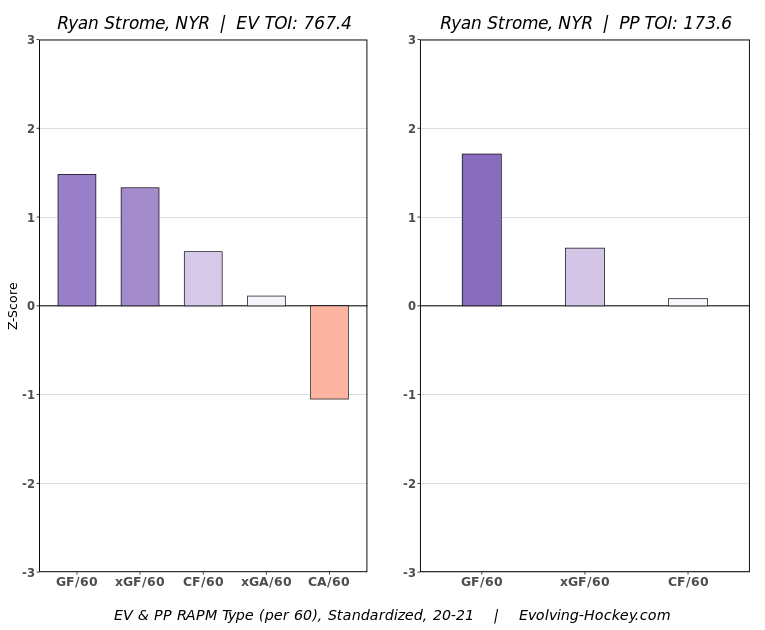 Strome’s RAPM chart backs up what we were able to infer from his heatmaps. He’s been an offensive driver, but has room for improvement defensively. How much of this is on David Quinn’s weird system of giving up the blue line by design, we don’t know.

Keep an eye on his powerplay numbers, as they do suggest a bit of an inflated success. Strome had a line of 3-14-17 on the powerplay this season, which was not operating at full potential for most of the season. Just worth keeping an eye on.

No complaints from this season

But Strome’s future doesn’t impact his grade from this season. He was easily the most consistent center on the team this year. Steady on and off the ice, and taking a step forward with his performance as well.