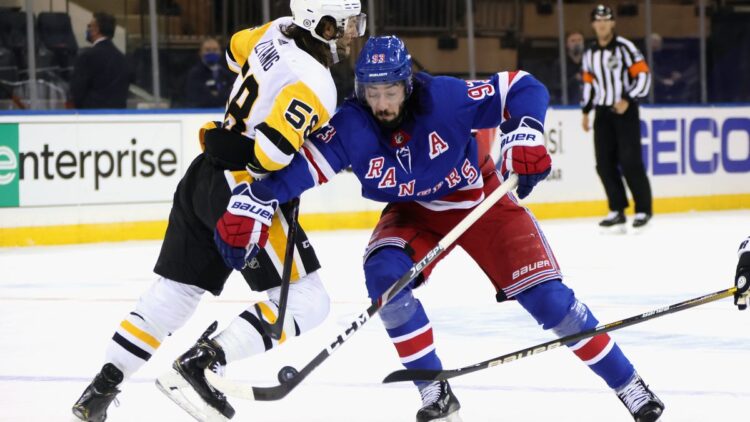 To truly understand Mika Zibanejad’s 2021 report card, we have to break it down into pre-COVID recovery and post-COVID recovery. Because let’s be real, there were two different versions of Mika Zibanejad this season. Zibanejad certainly didn’t put up the numbers he did last season, but that was never a realistic ask either. He did, however, show that when he’s himself, he’s a top scoring threat in the league.

Not necessarily in a contract year, but playing to see if the Rangers should give him a new contract at some point, Zibanejad was worse than invisible to start the season. As late as March 4, Zibanejad was playing like one of the worst centers in the league, and had just two goals and eight points though 21 games on the season. The Rangers were playing .500 hockey in spite of Zibanejad’s struggles.

Luckily for the Rangers, Zibanejad’s struggles were temporary and largely due to COVID. He really turned it on in the final 35 games of the season, putting up a line of 22-20-42 in those 35 games, finishing the season with a respectable 24-26-50 in 56 games. That’s just shy of a point per game. Given he wasn’t really there for 1/3 of the season, that’s pretty impressive.

Aside from the lingering COVID effects impacting his scoring line, it severely impacted Zibanejad’s play away from the puck. 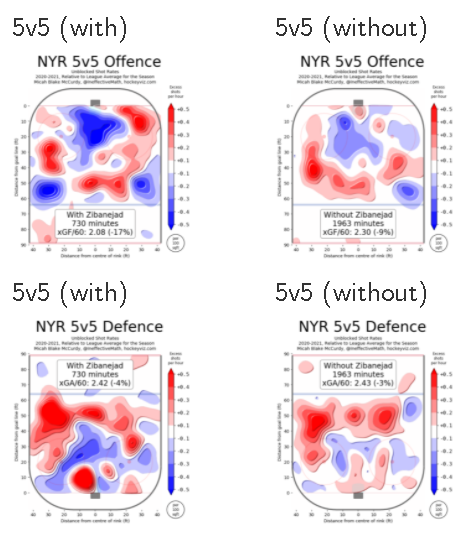 The season-long numbers for Zibanejad aren’t pretty. The stat line recovered, but the impacts didn’t. Not surprisingly, Zibanejad was a net-negative offensively (-9%), and pretty much break even defensively. The major question is how much of this was COVID related, and how much of this is just Zibanejad being less of a driver and more of an opportunist. Remember, the last time Zibanejad was a net-positive offensively –in terms of xGF/60– was 2016-2017. There’s *a lot* that goes into that, so it’s worth noting when evaluating for this season. Don’t worry, there will be a much longer evaluation of Zibanejad’s play when we look re-signing him.

When we compare Zibanejad’s March 4th RAPM to his full season RAPM, we see some improvement in his play driving metrics. Specifically, we see a big improvement in his defensive metrics, but not his offensive metrics. This has been a problem for Zibanejad under David Quinn, but the offensive output had always been there. Especially on the powerplay.

The full picture for Mika Zibanejad’s season is a complicated one. He certainly had struggles to start the season. We saw significant improvement on the stat sheet and defensively as he recovered from COVID. But the isolated offensive impacts didn’t improve. The big question is how much of this was coaching related, since we know Quinn micromanaged the top-six too much. Zibanejad was a net-positive in isolated offensive metrics until DQ, and was negative with DQ. Is that on Zibanejad? Or is that on Quinn?

Mika Zibanejad 2021 Report Card Grade: B+. This would be higher if he didn’t play like Brett Howden for 1/3 of the season.