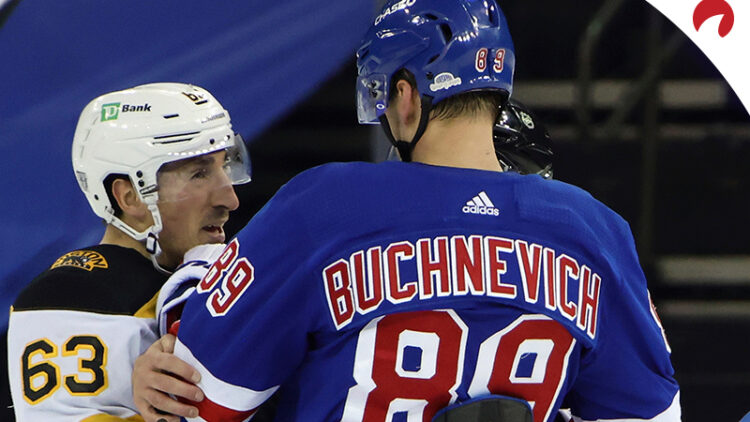 As the Rangers continue their playoff push, there is one eye kept on next year. That is likely the first year of the Rangers true playoff contention. Concerns about the salary cap have been voiced, but there really is no concern in the immediate future. As of now, the salary cap is of little concern for the Rangers.

Heading into the offseason, the Rangers have four key expiring contracts in Ryan Lindgren, Igor Shesterkin, Filip Chytil, and Pavel Buchnevich. All due respect to Libor Hajek and Brett Howden, but their contracts a) aren’t key, and b) won’t be expensive. Barring a significant move, the Rangers will likely keep that first quartet of players.

The flat cap is expected to stay at $81.5 million, giving the Rangers approximately $27.6 million in cap space to work with for next season. Add in the $4.4 million the Rangers save by buying out Tony DeAngelo, and it’s $31 million. Given what we know about comparable contracts, we can expect the following cap hits (roughly):

In total, that’s about $19 million if Lindgren gets a long term deal, or $16 million if he gets a bridge deal. In the end, that leaves the Rangers with anywhere from $11 million-$14 million with 2 forward and 2 defense spots open.

Next influx of prospects

Filling those spots will likely be Zac Jones, Morgan Barron, and Nils Lundkvist. Assuming Lundkvist carries an $850,000 cap hit, the two combined come in at $1.775 million. Bonuses make things interesting and are difficult to calculate. But assume neither will get to their performance bonuses.

Don’t sleep on Matthew Robertson and Braden Schneider, as they are set to hit the AHL next season. While we are penciling in Lundkvist and Jones, it’s certainly a possibility that Robertson and/or Schneider snag those roles instead. The cap hit difference would be negligible in this scenario. 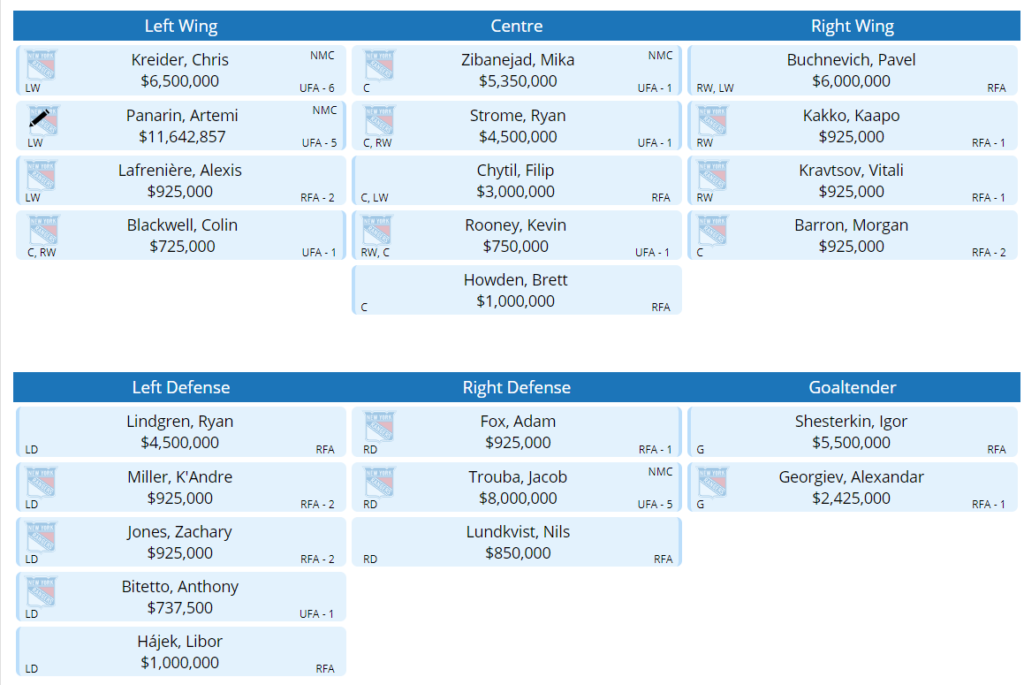 If we assume the Rangers go into next season with $8 million in cap space, that translates to about $28 million in cap space heading into the 2022-2023 offseason. The key RFAs that year are Adam Fox, Kaapo Kakko, and Vitali Kravtsov. All three likely come in at $12 million on the high end, with Fox taking up most of that. This does assume bridge deals for Kakko and Kravtsov, and there is certainly a case to extend them long term. If they go long term, it might get to $18 million.

Where things get interesting in 2022-2023 is with Mika Zibanejad and Ryan Strome. Both will be UFAs. Assuming the above is within reason, the Rangers would be left with $10 million in cap space. Again, I prefer to estimate high…occupational hazard.

Zibanejad likely commands $10 million. Strome, if he continues his current production, likely would get $6.5 million (middle ground number). The Rangers wouldn’t be able to keep both. But the question isn’t whether they should keep both. The question is whether they should keep either. As difficult the decision will be with Strome this offseason, it’s even tougher with Zibanejad. Remember, he will be 29 when his contract is up. Long term deals that carry well into their thirties are very risky.

All this is to say the Rangers don’t necessarily have a cap problem. They are aware of what is coming. They have likely already made up their minds on what to spend for both Zibanejad and Strome. If either wants more than what they are willing to spend, they will not be back with the Rangers. It’s the business of the game.

The same holds true for Pavel Buchnevich. The Rangers have a price in mind. If Buchnevich wants more and they can’t reach a deal, he will be gone. There’s a plan, and we’ve seen the Rangers stick to it. The future is bright. The Rangers have the young guns, the prospects, and the salary cap is not a concern. What more could you ask for?