Igor Shesterkin is the Rangers starter of today and the future 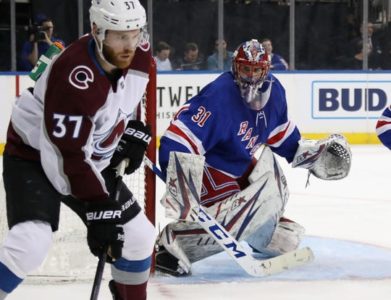 Ranger fans have been spoiled with quality goaltending for the majority of the past 30 years. First it was Mike Richter. Then we ignore the dark ages. Then it was Henrik Lundqvist. Now, it’s Igor Shesterkin. Make no doubt about it, Igor Shesterkin is the Rangers starting goalie today and for the long term future. Despite what others say, there is no “audition period” or “time to prove,” he is the starter. It was made clear even before his injury.

Long before Shesterkin went down with his groin injury, it was clear the every-other-game goalie rotation was hurting the Rangers. By early February, Shesterkin was showing he was the top netminder, while Alex Georgiev was struggling to maintain steady performances.

I’m sure you didn’t need the charts above to show that Shesterkin is a better goalie than Georgiev. We see it on the ice. Perhaps Georgiev’s shockingly bad even strength numbers stand out, but that’s a whole other story. There’s really no other way to put this: Shesterkin has already won the starting goalie job. Now it’s just a matter of seeing how good he actually gets.

Shesterkin does everything well. On yesterday’s pregame, Steve Valliquette highlighted one key aspect that makes him so good. It’s his ability to track the puck before pushing off. We see it in the above highlight from yesterday’s game. We see Joel Farabee make a great pass across the center line to Claude Giroux for a Grade A chance.

On the replay, we see Shesterkin tracking the puck, seeing it went through the slot, and before he pushes off he sees that it’s Giroux with the puck. There are actually two push offs from Shesterkin. The first is to get to the middle of the net, because he was screened to see the high slot. Then he tracks the puck to Giroux, and gives a second push off to make the save. We’ve seen Shesterkin’s raw ability in the KHL and AHL, but it’s the reads and tracking that sets him above the rest.

It’s clear that Igor Shesterkin is going to be the Rangers starting goalie from here on out. There is no more audition or time to figure it out. It’s been clear since before his injury. In fact, it’s been clear since a year ago, when Shesterkin was the starter in March 2020. No disrespect to Alex Georgiev, but this was never in doubt.