This should be the end of the Rangers’ goalie rotation 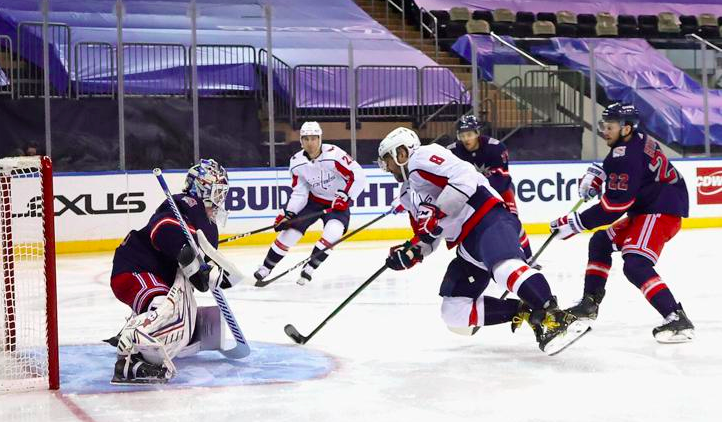 Rangers head coach David Quinn has started the season by giving each of his goaltenders a chance in net with an every other game goalie rotation. Igor Shesterkin started in the 4-0 loss to the Islanders. Just 48 hours later, Alexandar Georgiev earned a shutout in the 5-0 win against the Islanders. Georgiev played in the following 4-3 loss to the Devils and Quinn went back to Shesterkin, as the Rangers fell 4-3 in a shootout against the Sabres. Then back to Georgiev, then to Shesterkin.

You get the picture. There’s been a lot of back and forth.

Based on the confidence that Shesterkin has played with in the Rangers’ last two wins, Quinn should keep him in net going forward.

Looking at the last two games

Shesterkin stopped 39 of the 42 shots on goal he faced in Tuesday and Thursday nights’ games (16 versus Pittsburgh and 26 versus Washington).

It’s clear that Rangers’ defense has done a better job of limiting shots and preventing high-danger chances this season. However, in these games, Shesterkin handled the moments his team needed him almost flawlessly.

Tuesday night against Pittsburgh (shown above), Shesterkin faced five high-danger shots against and made four saves, stopping all mid and low danger shots in All Situations.

In Thursday’s game against Washington, it was more of the same. You can clearly see higher shot generation against the Rangers (and for them as well), but Shesterkin stood tall despite the added work.

There were eight high-danger chances for the Capitals in all situations. The one high-danger chance that made it past the goaltender was fluky. The puck bounced high off Carl Hagelin’s leg, over Shesterkin’s shoulder and behind him over the line.

The second goal scored by the Capitals was a mid-danger chance. Alex Ovechkin scored off a laser shot from the circle directly off a faceoff in true Ovechkin fashion.

Hard to do, equally as hard to stop when it happens.

Where to go from here

Quinn: we will be alternating goalies from now on pic.twitter.com/h0JxIKrD1l

All Shesterkin needed was a couple of wins and a little consistency in starts to get back to full form. It’s still early in the season, but going forward, Igor should take the goaltending reins.

Seeing the tenacious composure revived in Shesterkin’s play, it is the perfect time to make this decision. The Rangers arenow off until Monday due to the Covid outbreak on the Devils roster. It will be good to see how he looks with a few days rest.

If Quinn continues to be wishy washy about the situation, it will only prevent either of the goaltenders from getting comfortable. Comfort is key, so the Rangers goalie rotation should end.

There are still back-to-backs and other opportunities where Georgiev can take some of the load (especially in games against the Islanders since he is always stellar against them). These games are where Georgiev can prove to those looking for a new starting goaltender that he’s ready to make the leap.

We know Shesterkin is the long-term guy, and now that he’s playing like it, it’s time to let him step in and become the Rangers next franchise goaltender.