A look at why, where, and if the Rangers are truly having shooting struggles 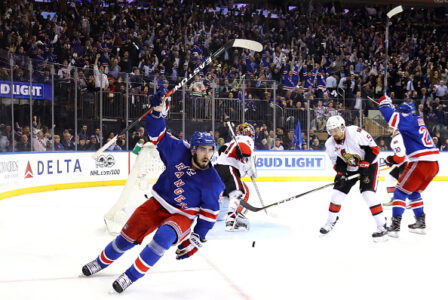 One of the common themes this season is that the Rangers are having bad shooting luck. They couldn’t seem to buy a goal, and the powerplay was completely hamstrung. While that may have been true early in the season, the Rangers have been on fire the last month. They capped it with their nine goal explosion, and are now shooting 9.43% at even strength this season. That’s fifth in the NHL. So are the Rangers having shooting struggles? It’s a real question.

While the team itself has been scoring, it still feels like the Rangers are having trouble scoring. While most of this can be pinned on the anemic power play, which is shooting 10.2%, good for 28th in the NHL, there’s still that nagging feeling the Rangers are going to regress back to not scoring.

Where are they finishing?

The above are heatmaps of where the Rangers are getting their shot attempts from last year, compared to this year. There are a few things that stand out:

So what does all this mean (assuming I’m reading this correctly)?

The Rangers are actually getting more shots at all situations and more a better expected-goals rate this year than last. I find that to be very interesting, and quite frankly not what I expected.

Is the difference just the powerplay?

All of this leads me to believe that the issue really is just the powerplay. As mentioned above, the Rangers have an atrocious 10.2% shooting rate on the powerplay. That’s 28th in the league. This brings me to three conclusions:

1. It really is just the powerplay

We wouldn’t be having any of these conversations if the Rangers were converting even league average on the powerplay. Those wrist shots that the Rangers aren’t scoring on? That’s Mika Zibanejad’s issues to start the season. This year it’s Artemi Panarin on that side, and he’s getting more one-timer opportunities.

2. The powerplay setup is hurting them

At the risk of beating a dead horse, the lack of a shooting option from the off-wing to complement Panarin is killing them. Handedness on the powerplay matters. If it’s not Alexis Lafreniere on the top powerplay unit, then it should be Pavel Buchnevich. Someone that can present a legitimate shooting option from that side of the ice would open better chances from the Panarin/Zibanejad spot.

The Rangers had that last season. They had the one-timer option running from both sides of the ice. There is a massive slapshot hole there this year. Is it personnel? Or is it just the Rangers becoming predictable, and trying to run the same play repeatedly?

3. Health factors into this

The Rangers were without Zibanejad for most of the season. Or at least without most of Zibanejad. They were without Panarin for a couple of weeks as well. Interestingly enough, just as Zibanejad was starting to get his legs back under him, Panarin took his leave of absence.

The power play setup is a problem, but it’s the same setup as last year. In theory, a healthy Zibanejad with a returning Panarin should be able to get close to repeating their production with the man advantage, within reason. I do question if the Rangers would have had shooting struggles if Zibanejad was truly healthy all year.

The top unit does need another lefty on it, and that is a hill I die on.

Obligatory: Is it because of DeAngelo’s absence?

This has to be addressed, and the short answer here is no. Adam Fox has an xGF/60 on the powerplay of 8.9. DeAngelo’s last year was 9.07. That is a negligible difference.

Is there some kind of psyche difference? Possibly, but Fox is a better defenseman and puck mover than DeAngelo. I find it hard to believe that, given all the evidence we’ve seen that the Rangers are actually generating more offense this year than last.

But is it possible? Sure. I could be wrong.

Patience is a virtue

This season has been a weird one for the Rangers. Between injuries, COVID protocol, Russian hit pieces, the ghost of Mika Zibanejad, and firing Tony DeAngelo into the sun, the Rangers have had one of the wackiest seasons in recent memory. But this is also the same team as last year, just adding Alexis Lafreniere. The Rangers shooting struggles were more about luck than anything else.

The good news is that the Rangers had roster holes this year, which limited their ability to truly compete in a brutal East Division. In essence, the Rangers dealt with shooting regression in a year that was stacked against them to begin with.

This bodes well for next season. They may not win it all, but it’s safe to assume a giant leap forward.