Fixing the NY Rangers powerplay: Lafreniere should stick on PP1 when Panarin returns 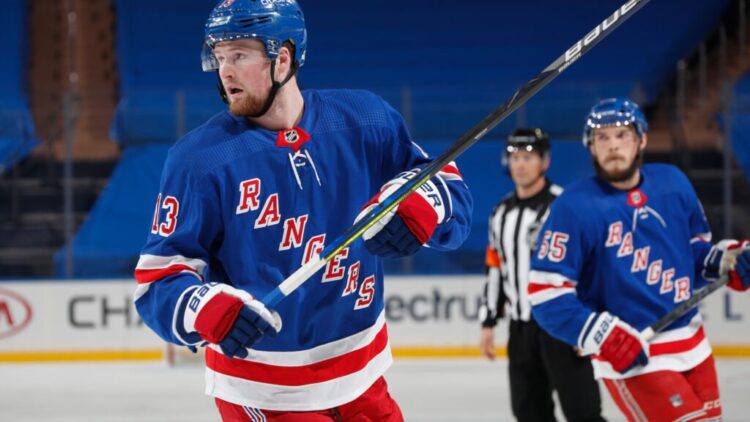 The New York Rangers haven’t been scoring much on the powerplay. This is pretty impressive, considering last year they had one of the best powerplays. It seems impossible that it turned to crap overnight, but here we are. Clearly a lot of this has to do with Mika Zibanejad’s struggles. It’s tough to blame the injuries, since PP1 was generally unaffected until Panarin’s leave of absence. Clearly something is amiss, and when Panarin returns, it needs addressing. Alexis Lafreniere may be that answer for the powerplay.

This isn’t a new issue. In December 2019, I wrote about how four righties on the powerplay isn’t good for long-term success. Without re-hashing the entire thing, this is all about timing. Even before Zibanejad’s struggles, the Rangers were rather predictable. They would load up Zibanejad from off-wing and go from there.

The unit itself is filled with skill. Chris Kreider is in front of the net, and is one of the best net-front presences in the game. Ryan Strome is in the high slot of the 1-3-1, with Panarin on the right and now Adam Fox up top. It’s a quintet that should be feared.

But yet when everyone was there, it wasn’t clicking this year.

Predictability Is A Problem

The Rangers are predictable on the powerplay. They only shoot from one side of the ice, and it’s where Zibanejad usually is. But when he’s not scoring, then the powerplay won’t score. There is also nothing in the high slot where Ryan Strome sits.

That deep shade of blue/purple (deal with me, I’m colorblind) on the right side shows the Rangers generate no shots at all from that side of the ice. This again checks out. There’s a righty there, so the one-timer option is mostly gone. That extra half second to receive the pass, set, and shoot gives the goalie enough time to get over. It also gives the PK enough time to get a stick in the lane.

With few options from half the ice, the PK can begin to read the play better. They can’t cheat to that side, much like how cheating to Alex Ovechkin won’t work. But you can still read the play and get an extra step.

The Rangers have Alexis Lafreniere. He’s a lefty with a lethal shot who makes great reads. Why isn’t he on PP1 regularly?

The solution for the Rangers is simple. Lafreniere should be on the top powerplay unit on the off-wing when Panarin returns. That moves Panarin to the high slot, directing traffic with Fox while getting open for his own chances. This would bump Ryan Strome to PP2, which is also struggling.

PP2 would wind up with Strome, K’Andre Miller, Pavel Buchnevich, Kaapo Kakko, and Filip Chytil, bumping Brendan Lemieux off that unit. As long as Strome isn’t in front or in the slot, then this unit can also set up with two shots on the off-wing.

It’s Probably Not That Simple

As much as we know the Rangers need to adjust that top unit, it’s never that simple. The Rangers are still a top team at generating quality chances on the powerplay. But until Zibanejad gets going, and it looks like he may finally be revving up, the top unit likely isn’t going to score as much as last year. In fact, given the absurd shooting percentage last year, it’s highly unlikely.

With Zibanejad struggling, getting him going does matter. This includes getting him open looks with space. To open that space with the man advantage, taking shots from the other side of the ice is the best bet. Lafreniere has that lethal shot on the off-wing, and it’s about time the Rangers took full advantage.

While it’s likely not as easy as it sounds, the Rangers need to try something. The powerplay is a problem, and it’s holding back a lot of the offensive potential on this team. Adding Lafreniere to the top powerplay could fix it, and it’s worth a shot.