Up until very recently, the Rangers had a solid powerplay. Even when Mika Zibanejad was out, the Rangers’ powerplay didn’t even skip a beat. The reasoning was pretty simple too: They had the right personnel in the right situations to succeed.

Now with Zibanejad back, all of a sudden the Rangers have a bad powerplay. It’s not just about converting either, they just look sloppy.

Kaapo Kakko was taken off PP1 and his spot was taken over by Artemi Panarin, with Zibanejad sliding into the off-wing circle spot. Adam Fox is up top with Chris Kreider in front. Ryan Strome is the rover in the middle. The three in the middle rotate, but for the most part that’s what it is. That’s four right-handed shots on one powerplay, with the lone lefty the net front presence, not even on the off-wing. It winds up looking like this. 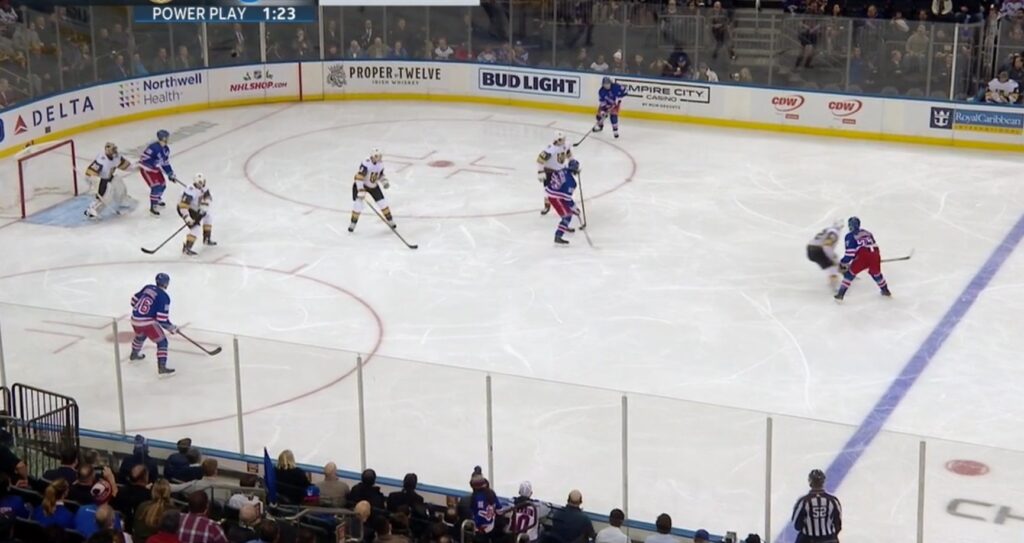 When something like this happens, the opposition doesn’t have to fear the one timer from half the ice. They know they’ll have that extra half second to get over. For the goalie, it means less splits and more push offs with position. It’s so much easier to defend.

The funny thing here is that the Blueshirts have the personnel to make it work. PP2 is comprised of Kakko, Pavel Buchnevich, Filip Chytil, Jacob Trouba, and Tony DeAngelo. That’s three lefties. The simple answer here is move a lefty, probably Kakko, to PP1 and drop a righty, preferably a shooter (Panarin or Zibanejad) to PP2.

Since Panarin creates offense for everyone, dropping him to PP2 with Chytil and Buchnevich keeps the talent level but also spreads out that finishing shot. It ensures there are off-wings at the top of each circle. Fox and DeAngelo are solid up top. Overall, just completely balanced.

With this much skill, there is the urge to put all that high-end skill on one unit and just let it run. But the handedness matters. Without it, the ice is basically cut in half, and the danger level of the powerplay is neutered. The skill and personnel are there, just needs a tweak.