Are the Rangers really ready to make jump to contention? 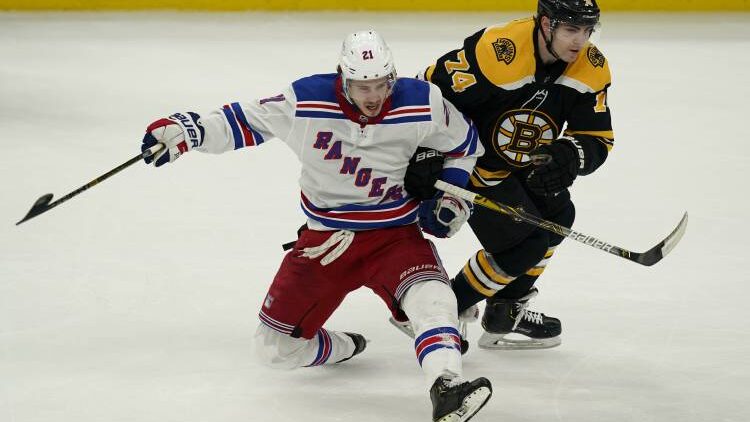 I should have seen the result of this game in Boston coming. The second Jaro Halak was named starter I should have expected a shutout. But could someone please explain to me how this team once again came into a game looking flat and ill-prepared? No Artemi Panarin tonight was questionable at best, you hope he is in Saturday, but even he wouldn’t have been able to save what was just an all-around back night for the Rangers. It was a microcosm of a roller coaster season, which has me questioning if the Rangers can make the jump to contention.

Alex Georgiev gave us a real news worthy story when he punched Tony DeAngelo, but he doesn’t even look like an AHL goaltender right now. This dude struggles in all facets of shots; blue line slappers, slot shots, dirty area goals. You name it, he can’t stop it right now. But that’s a minor issue.

What Is This Season’s Direction?

I truly don’t know what the goal of this season is if you are the Rangers. I guess the goal was just to build with the young core and maybe make the playoffs, but no one is stepping up to the occasion.

Chris Kreider appears to be going on his inevitable invisibility run. Mika Zibanejad can’t hit the net. David Quinn is putting Alexis Lafrenière with Brett Howden for a number of shifts. It’s truly a joke what this season has become.

I brought up an interesting discussion with fellow BSB writer Brandon Cohen. His take: The Rangers should trade their pick 1st round pick for a center during the offseason. The more you think about it, looking at the draft class with a defense heavy first round, it’s not a bad idea. The Rangers have an embarrassment of riches when it comes to high octane defensive prospects. Not all of whom will make the NHL roster and would ultimately just sit and rot in Hartford.

So take that draft position, as well as any assortment of roster players or prospects and try to get an NHL ready asset into this organization. Could be Eichel. Could be a Barkov if they wanted to go that route and extend him. The options are rather endless. This offseason though is either going to accelerate the Rangers into the contention window, or set this franchise back a ways if Gorton does not play his cards right.

A major factor in my opinion is a sect of the coaching staff and ultimately Quinn. You can’t deny that when he had his effective veterans, Quinn did instill a resilient identity into that team at first. They did not appear to be out of any game despite having a shell of the talent they currently have on the team. Could have been him, could have been the veterans presences of Fast, Staal, Lundqvist, etc., but that aspect is missing this season.

Last night the Rangers gave up a short-handed goal in the first period and never recovered. It’s funny when you watch the Knicks this season, with essentially the same lineup as last season’s team. Tom Thibodeau has them playing hard and they are buying in to his message. You bring it back to the Rangers, where’s the leadership of Kreider, of Trouba, of Zibanejad to hold people accountable; even themselves? Quinn’s message might be growing stale on the team as he continues to make some questionable in game decisions, but these guys are professionals. They can’t muster up some gall to battle night in and night out?

And What About The Other Assistant?

Another note on the coaching staff is David Oliver. Oliver was brought in for his familiarity with the “X’s and O’s” of hockey. But then how is this power play–which ranks 25th in the league at the time of this post–failing to produce any sense of a threatening chance? There’s no chance of Rangers contention without a functioning powerplay.

Why do the coaches insist on not having more than one shooter per unit on each power play? You’re telling me Lafrenière can’t be a shooter on the top unit on the off wing as a one-timer option? The performance of the power play warrants the questions. Oliver might need to go, and be replaced by a Jacques Martin equal that will have the same effect on the powerplay. The Rangers have the personnel for it; it’s a shame they are not producing like it.

We talked about the short-handed goal earlier. That was the third short-handed goal the Rangers have surrendered to the Bruins this season. You just can’t justify that for how often you play your divisional opponents this year. If the Bruins have adjusted to the Rangers, why can’t the Rangers in-turn adjust to anything the Bruins do? They are legitimately intimidated by the Bergeron line. They’re like an enigma. If the Rangers can learn to actually adjust in game and not have a defeatist mind-set, then this team is ready for the jump. For now though, they haven’t been able to, which means the Rangers aren’t in true contention, and it causes misery.