Rangers no-show in Boston, get crushed in embarrassing display 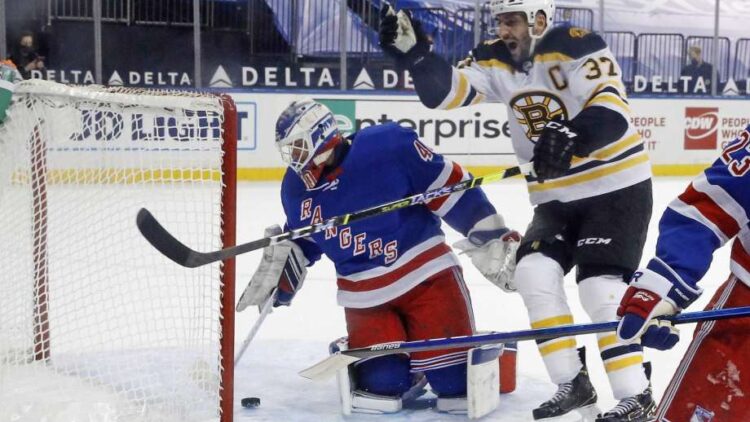 It looks like the Rangers forgot they had a game tonight, and it resulted in them getting crushed by the Bruins. They completely no-showed this one, and it started from puck drop. The Bruins were fast, more resilient, and just better. The bad was all over the lineup, and it started with a bad goal in the first. Alex Georgiev’s struggles continued with this one, and it didn’t end there. The Rangers then gave up a shorty and a rare powerplay goal against. This one was over before it even started.

The Rangers have too many games that look like no-shows. I’d love to blame injuries, but the Rangers are mostly healthy nowadays. By the third period, David Quinn had changed the lines up to something a little better:

Rangers have played the third period with lines looking like…

Not that it's made much of a difference… #NYR

The team misses Panarin for sure, but the lack of effort is just atrocious. Lack of execution is one thing, but to look like you forgot to get off the bus?

At it again. 🍝 #NHLBruins | @pastrnak96 pic.twitter.com/miLk7fFAwR

The Bruins top line got in on the forecheck, which is par for the course for them. The Rangers did a good job of keeping the Bruins to the outside, and it led to a one timer from the mid-point from David Pastrnak. Either Alex Georgiev was screened, or this was a bad goal.

Bruins 2, Rangers 0 – The powerplay is supposed to score, not give up goals

A Chris Kreider turnover on the powerplay led to an innocent 2-on-2 shorthanded rush. Brad Marchand made a great move around Pavel Buchnevich. Then for some reason Adam Fox snow angeled, which left a passing lane for Marchand to Patrice Bergeron in front.

Bruins 3, Rangers 0 – A rare PPG against

A rare powerplay goal against because the Rangers just couldn’t clear the zone. The Bruins moved the puck well and then crossed the center line for a blast from David Krejci.

A rare miscommunication on defense here. Following the turnover by Brendan Smith/Filip Chytil, K’Andre Miller went from behind the net to the man in front, and Jacob Trouba came down to the man in front as well. By the time Trouba was able to react to it, Jake Debrusk was open and put a good pass into the net.

This is misleading. The Bruins basically stopped caring after a while, and it was clear the Rangers were never going to make a real push. It has score effects written all over it. When games get away like this, these charts are always a little off.

The game being dull isn’t a surprise. The amount of Rangers in the “good” category is, but again that’s score effects. Like above, this has score effects written all over it.

The Rangers get the Bruins again on Saturday afternoon, and you have to figure it can’t get much worse than getting crushed tonight. They will likely have Artemi Panarin back in the lineup, which should help things. But it won’t help effort. Without effort, the Rangers are cooked.