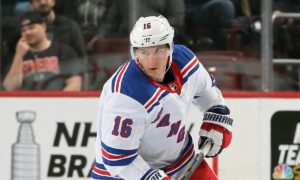 Despite the score, this game was a result of the Devils goalies unable to make a damn save. Someimes, a Rangers game review is just that simple. The Devils did this to the Rangers twice earlier in the season, where they won despite the Rangers being the better team. It’s a nice change to be honest. The Rangers might have been outplayed, but it’s nice to just take a dump on your rival.

Igor Shesterkin was just immaculate in goal, but got injured while trying to make a save. Hopes and prayers that whatever ailed him does not keep him out long. He’s been so good despite his record. If it does though, you hope Alex Georgiev can turn up his individual game. Let’s dive a little deeper here shall we? Boy do I have some thoughts about a few decisions tonight.

The Rangers got outplayed in the first, which is also a short and sweet game review of the entire night. There were no if’s, and’s, or but’s about it. The Devils just showed up for the game on time and had some immediate high danger chances against Shesterkin. The only goal allowed coming in the first was due to a lively bounce off the end board and right out to Jack Hughes. Plus a  rare miscue and lackadaisical defensive effort by Adam Fox. Igor just had no chance to make the save. This wasn’t even the biggest question mark of the period.

That would come if you took a look at the time on ice sheet and noticed that Pavel Buchnevich and Mika Zibanejad BOTH had less than 4 minutes of ice time at the end of the first. Look, we’ve all been wondering what the hell is wrong with Zibanejad. He doesn’t have the finishing ability, seems to sometimes appear lost on the ice, but he also has 5 points in his last 6 games. The ice time would become an even bigger issue.

The second period started with the Rangers down 1-0 and being hilariously outshot 14-6. What does Quinn do? Starts Brett Howden and the 4th line. But it didn’t stop there, then the 2nd line of Kreider, Strome, Blackwell got a shift. Then low and behold the first line would come out and be centered by Filip Chytil. Mika was benched. He would not get a shift until a little after halfway through the second period.

The Rangers are hilariously weak at center even with Chytil back in the lineup and Strome putting up some stellar numbers riding on a line with Kreider and Blackwell. Zibanejad doesn’t strike me as the kind of player that responds to benching.

You think Zibanejad doesn’t know he’s struggling? Do you really think a professional athlete doesn’t know he needs to be better night in and night out being a captain on this team? Does Zibanejad’s game improve sitting on the bench while Brett Howden gets more ice time to run some suicides out there and contribute nothing of value? Why doesn’t Howden get benched?

I don’t care the Rangers won this game on 19 shots and 6 goals, that was a crap move by Quinn and co especially since Zibanejad has been setting up his line mates fine the past 6 games. We know Mika is normally a goal scorer, but he is at least contributing offensively over the last little while. Benching your top line center is stupid and should never be done. Glad the Rangers won though despite this bad decision.

With Mika on the bench, the second line got some more ice time. They would come alive as Kreider netted two goals in Chris Kreider style. He crashed the net on the first, and deflected a Ryan Lindgren slap shot for the second. This put the Rangers up 2-1. Kreider really is either the best player in the NHL or totally invisible and there is no in-between.

Give a nod to Igor in this period as well. The Rangers got a pair on six shots, but Igor had to make 9 saves with like 3 or 4 of them being quality saves.

Kreider continued his hot streak and got his second hat trick in a week. Chytil made a great pass, and a nice move with a hard wrist shot upstairs by Kreider finished it.

Then came the heartbreak. On the powerplay the Devils get a short-handed chance. Igor pushed side to side to go and make a save attempt and just fell to the ice and did not get up. He stayed down for quite awhile and you could cut the tension of all of Rangers fandom with a knife.

Buchnevich helped trainer Jim Ramsey get Igor to his feet and help get him over to the bench. Igor did not put any weight on his right leg. You hope it is nothing, but man that just took the wind out of the sails. Quinn would say in the post game presser that it was a “lower body injury” and would be further evaluated. so we all will have to hold our collective breath.

Another player on an absolute tear is Alexis Lafrenière. He got on the score sheet in the second period with an absolute dime to Buchnevich for a one timed blast past Mackenzie Blackwood. Oh, and Alexis Lafrenière is a New York Ranger who can absolutely snipe LASERS past goalies, like we saw last night. Maybe he wasn’t a bust after all…