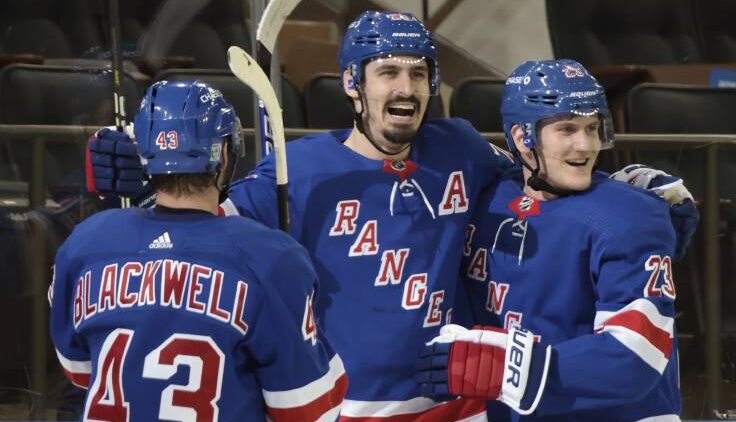 The return of the fans, whether you agreed with the decision to allow them back in or not, was really nice to hear again. This was the exact kind of game that the Rangers could use to go on an absolute heater. A Cup contending opponent, balanced score sheet from up and down the lineup, and Alex Georgiev was solid in goal as the Rangers topped the Bruins. Let’s begin breaking this one down.

With the Bruins on the second half of a back-to-back after playing the Islanders last night, it was vital that the Rangers come out and apply pressure on the Bruins as much as possible. From puck drop, that was evident. It was a tough night for officiating, as Tim Peel let Brad Marchand drop his gloves against Adam Fox and not call a single penalty. That didn’t stop Peel from calling a weak holding call on K’Andre Miller minutes later. Luckily that was neither here nor there.

The Rangers scoring started from a great play by Julien Gauthier. He retrieved the puck near the circle, spun around, got space from his defender, turned toward the net, and just absolutely lasered a shot by Tuukka Rask for his second NHL goal. For only 1,800 fans, they were clearly heard all night long. This game was not only high scoring, but skillfully physical as well. The hits the Rangers did on guys like David Pastrnak, or any of the Bruin defensemen, didn’t take them out of position. This is the kind of physical hockey that is actually entertaining. Nothing worse than going for a big hit but then sacrificing your positioning and allowing a scoring chance to develop for the opposition.

The second period continued to be more of the first. The Rangers played extremely dialed in hockey, causing havoc in the neutral zone. They forced turnovers and created takeaways all game. One such takeaway happened when Kreider got the puck and bumped it to his left to Lafrenière. Lafrenière threw an absolute dime to an open and streaking Ryan Strome who went bar down on Rask.

The Bruins got one back though from a pretty passing play by Pastrnak to Bergeron. Georgiev had no chance on it. The game became a circus after this. The whole Bruins team really acted dirty. The biggest culprits were Marchand, Trent Frederic, and Jack Studnicka. They all seemed to be in the middle of all of the extra curricular activities that occurred frequently in the second.

The one positive of playing only your division is there is genuine hate brewing between these two teams. It is organic too, which is the best. You knew the fans were into it when they chanted “F*** You Marchand” after he got into it with Ryan Lindgren. Marchand was penalized and then on the ensuing power play, Fox got a shot on net and Colin Blackwell was there for the deflection.

Blackwell really couldn’t stick in Nashville huh? Their loss. This guy has been an absolute bargain signing for this organization. This is especially true when you factor in the loss of Jesper Fast.

Just 12 seconds later, Kreider reverse hit a guy, spun off, went around the net, and just shot it on net at the half wall and it went in. The Rangers finally got some puck luck for all of those glorious opportunities prior in this season.

The third period opened with the Rangers scoring again a few minutes in. A gorgeous pass by Adam Fox after saving the puck at the blue line to a streaking Buchnevich at the goal mouth. With such a big lead at this point of the game, Quinn threw out his bottom 6 players more to get them some ice time.

The 4th line made him look good as they connected for the sixth Rangers goal by Jonny Brodzinski. I give Quinn a lot of credit preparing the guys for this game. I do think there is a conversation though to be had that having some fans in the building must have been a breath of fresh air for the team. They Rangers have almost gone a whole calendar year without seeing fans. Glad the team showed up for those in attendance.