Aleksander Barkov vs. Jack Eichel: Who would be the better acquisition? 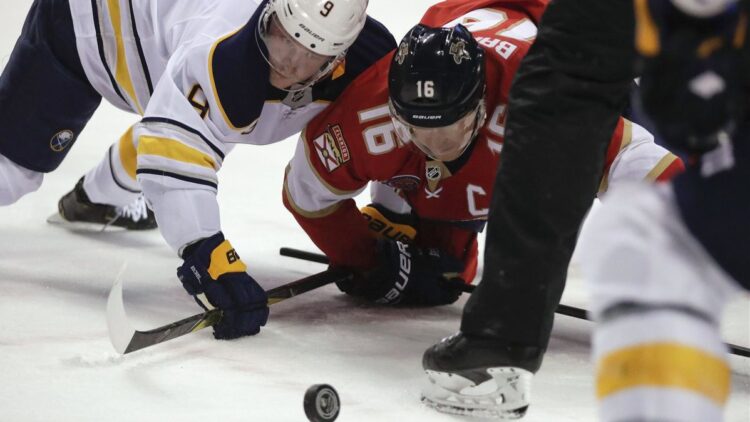 The talk of Rangerstown has been all about the kid from Beantown, Jack Eichel of the Sabres. The star center looks more and more like he is going to want out of the mess that’s going on in Buffalo. It’s understandable why Rangers fans are dreaming of Eichel in blue. He has 350 points in 368 career games (139 goals, 211 assists) and has been one of the top centers in the NHL since he arrived during the 2015-16 NHL season. He is a dream acquisition for a team who has depth at seemingly every position except center. But he isn’t the only player the New York Rangers should look at to improve center depth. The Rangers might want to pursue Aleksander Barkov from the Panthers.

The second overall pick of the 2013 NHL Entry Draft has been a force for the Florida Panthers and he’s taken his game to increasing heights year after year. He’s now locked in as their number one center on a team that just can never seem to find the right combination of talent to make it all come together. Barkov has 425 points in 495 career games (161 goals and 264 assists). In 2018-19, Barkov won the Lady Byng Trophy after putting up 96 points in 82 games. Immediately, many will say Eichel is far and away the superior player and the Rangers should focus all their attention there but when we take a deeper look at both players, they don’t seem so far off at all and in some cases, the advanced stats may surprise you. Time to dive in.

(Before I begin this section I’d like to extend a special thank you to Dave Shapiro and Rob Luker for helping me out. As a writer and hockey fan, I’m doing more to understand advanced stats so I can understand the game better. This gives you readers of BSB even more high quality content to look forward to.) 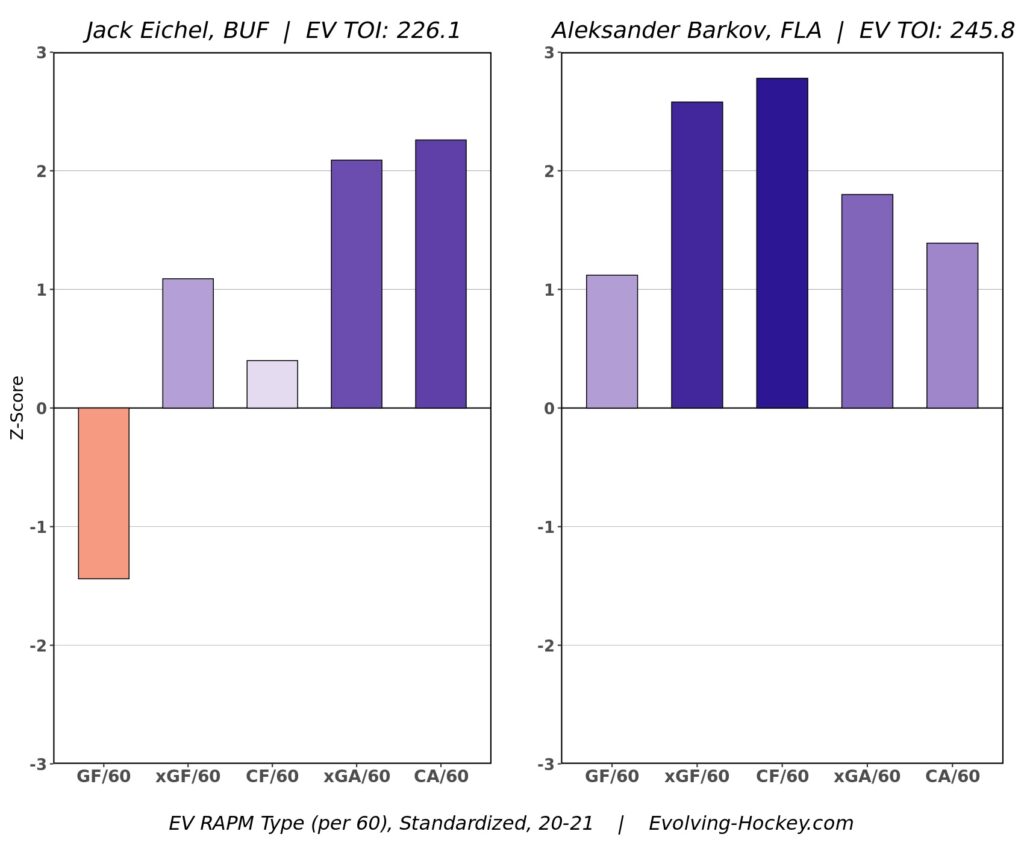 This season, Aleksander Barkov has an xGF% of 65.08% at 5v5, while Jack Eichel has an xGF% of 64.46 at 5v5. Barkov has the slight edge in this category, but it is rather negligible. Breaking it down more, Barkov generates more offense, but Eichel is better defensively, as seen above.

Both players play on their top lines and both have been on ice for relatively the same amount at even strength. The gap is narrow, but it shows that Barkov is just as feasible an option for the Rangers as Eichel.

Barkov, this season at 5v5, has a CF% of 58.93% while Jack Eichel has a CF% of 58.05. Again the edge is slight and again, Barkov comes out on top. While again slight, the Panthers do spend more time in the offensive zone with Barkov on the ice than Buffalo does with Eichel. This is the second slight edge to Barkov.

We move onto the third advanced stat and that’s ixG, individual expected goals. This essentially tells us how the player’s goals scored compare to his GF%. This season, at 5v5, Barkov has an ixG of 3.59 while Eichel has an ixG of 2.45. This is in line with the xGF/60 above. Barkov currently has four even strength goals so his ixG matches up almost exactly to how he’s scoring at even strength. Eichel is another story. He currently has just one goal at even strength this year and his ixG tells us that he’s been unlikely.

To add to this, Barkov’s shooting percentage is at 10.9% rate while Eichel is at 4.4% overall. Barkov’s shooting percentage is right around his average (13.3%) while Eichel is way below his average (10.6%). Eichel has been a bit unlucky. Clearly this season we see Barkov has been the better center of the two players. He has Eichel beat in each of our categories, albeit slightly.

The biggest thing to takeaway here is that Barkov has a higher career xGF% and CF% than Eichel by a little over two percent for both stats. He’s been better at helping the Panthers get higher quality and quantity scoring chances over the course of his career than Jack Eichel has with the Sabres. Eichel does have the ixG advantage (11.5-9.73), so he does have more perceived talent. Eichel needs to hope his puck luck changes soon to see if he can get his usual numbers up.

Barkov has one year remaining on his six-year deal with a $5.9 million cap hit, after which he will be a UFA. Eichel has five years left at $10 million per season. It’s clear from above that these are two immensely different contract situations. Barkov will be a rare 26 year old free agent, and could get as much as seven years (if he signs outside of Florida) at over $9 million. Imagine the bidding war if Barkov were to make it all the way to unrestricted free agency?

The Rangers could choose to trade for Barkov, assuming Florida is willing to move him. Their best chance is this offseason when his NMC turns into a modified no-trade. A guaranteed extension would be required before the trade, though.

Meanwhile acquiring Eichel, which many people believe will happen before he is due his $7.5 million dollar signing bonus in the summer of 2022, is another possibility that has been discussed. His NMC is there, but probably won’t be an issue. The Sabres will have a very important decision to make about their future at this point in time. Do they stick with Jack and keep trying to build a championship caliber team behind him? Or do they enter a pseudo-rebuild centered around Rasmus Dahlin, Dylan Cozens and Sam Reinhart?

If it comes to Eichel or Barkov –assuming again that Barkov becomes available– then it will be a tale of two different situations. Eichel comes with the certainty of five years under contract, albeit at an expensive $10 million. Barkov might come cheaper in a trade, but there’s no guarantee of an extension. Although that latter part might be able to be worked out.

The problem with Eichel is that $10 million is a lot. The Rangers have some ELC’s ending that may cause cap issues. It wouldn’t be a matter of Eichel living up to the deal, but with Kaapo Kakko, Alexis Lafreniere, Adam Fox, K’Andre Miller and others needing new deals in the near future, there’s only so much money to go around. Barkov will be expensive, but not as expensive.

Do the Rangers want to hold onto Mika Zibanejad or not? Can they afford his next deal and do they want to have him on a long term deal? With Zibanejad possibly getting something like $8 million a year on his next deal alongside Barkov/Eichel and Panarin, that’s three players making up more than a third of the salary cap. Add in the kids mentioned above, and it becomes a problem.

In looking at the numerous trade proposals for Eichel, there are a few that caught my eye. The first was Filip Chytil, Pavel Buchnevich, Nils Lundkvist or Braden Schneider (or similar prospect), and a first round pick for Eichel. If Buffalo wanted to really kick start a rebuild this would be a great haul for the disgruntled Eichel. Chytil gives them a center with top-six potential. Buchnevich gives them a good and young-ish top-six winger. Plus a high end prospect and a top pick to rebuild the farm.

For Aleksander Barkov, I could see the Rangers offering almost the same package as it fills needs for their team as well. It almost seems like whatever the trade for Eichel, it’s the same for Barkov.

The second scenario was Vitali Kravtsov, Morgan Barron, Alex Georgiev, Matthew Robertson, a 2021 first round pick and a 2022 first round pick. If Buffalo does this, they are banking on young players that aren’t far off from the NHL. But the salary would need some figuring out.

Would Florida do this for Barkov? Honestly this would signal rebuilding yet again for them and I don’t know if that’s where they’re headed. The young players would be great for both teams but this is a very team direction assessed trade.

The third scenario was Mika Zibanejad, Buchnevich, Georgiev, and two first rounders for Eichel (or Barkov). This trade makes a lot of sense if the Rangers feel Zibanejad’s future isn’t on Broadway and they are happy to build with Eichel as their better, younger center going forward. If you make this a trade for Barkov, switch Georgiev with someone like Robertson or Zac Jones since the Panthers have fantastic goalie depth.

It is worth noting that the Rangers aren’t going to trade Lafreniere, Kakko, Fox, Miller, or Shesterkin in any of these deals.

Barkov and Eichel are two of the premier centers in the NHL and both would make the Rangers better now and in the future. Eichel is the younger of the duo at 24, while Barkov is 25. Their ages both correspond to the current stage of the Rangers rebuild.

Jack Eichel is no doubt a fantastic player, but Aleksander Barkov wouldn’t be a bad acquisition for the Rangers either. They are very similar players and as the advanced stats show us, Barkov has been even better in some aspects of his game that Eichel. Either one would be a huge upgrade. Which one would you prefer? Let me know what you guys think in the comments below.