For Libor Hajek, it’s now or never to show he belongs with the Rangers 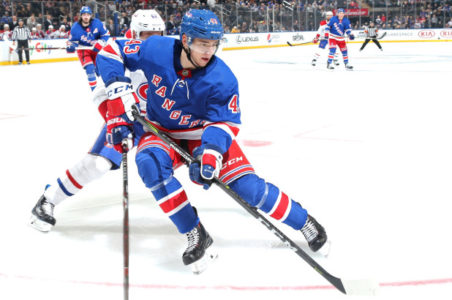 What a ride it has been for Libor Hajek in his short stint with the Rangers. After a strong first five games two seasons ago, Hajek has been downright atrocious since. Injuries haven’t helped his cause, but neither has poor usage by David Quinn. Let’s be real, Hajek never should have been on the top pair with Jacob Trouba last season. Hajek also struggled last season in the AHL, and then again this year in Extraliga in the Czech Republic.

Hajek finally gets his chance tonight, and he will be the ninth defenseman used by the Rangers this season. It speaks volumes that Hajek couldn’t get in the lineup over Anthony Bitetto, Brendan Smith, and Jack Johnson. But he finally got there. It’s now on him and Quinn to ensure he gets to stay.

This is critical for Hajek. He’s had a lot of issues due to terrible usage. It’s clear he didn’t work with Jacob Trouba, and he doesn’t work on the top pair either. Getting him the best possible usage –sheltered usage– is the best bet.

But then brings up the question about who to pair him with. Ideally he’s with Adam Fox, but Fox doesn’t really need sheltered minutes. Fox is likely good enough to carry Hajek though. So perhaps that’s something that can work?

If not, does Quinn dare go with Hajek-Bitetto on the bottom pair in sheltered minutes? That seems like it could spell disaster.

If it’s Miller-Trouba, then Hajek-Fox is the only thing that makes sense. That leaves Lindgren-Bitetto. No matter what, it’s going to be a rough go of it the next few games.

This is an opportunity for Libor Hajek to stick in the Rangers lineup. The organization clearly likes him. But if he wants to stick over Smith, Johnson, and Bitetto, then he needs to show it on the ice. It may be premature, but this may be Hajek’s last chance to show he belongs.