What’s going on with Libor Hajek, and what is his future? 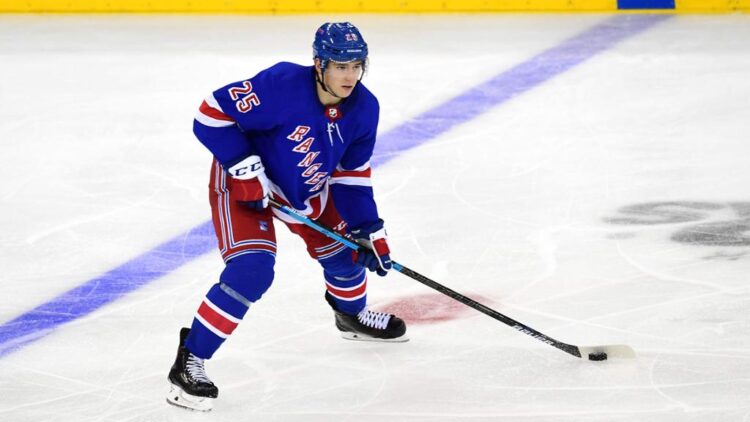 Libor Hajek is noticeably absent from any lineup this season, and his future with the Rangers is certainly in doubt. He was the centerpiece of the Ryan McDonagh trade, to the point where JT Miller had to be added to the deal. Yet he can’t seem to beat out Jack Johnson or Brendan Smith as the 7D?

Like Larry Brooks mentions in his article, perhaps the Rangers just whiffed completely on Hajek. The rumor was they were high on him following his performance at the World Juniors that year. This goes to show you that, the World Juniors aren’t really that great a tool for analysis.

Even if they may have made a mistake, doesn’t it make sense to see what they have in him? He can’t be much worse than Jack Johnson. Smith has been decent thus far, but he’s clearly not the long term answer. Why not just see what Hajek can do?

In the absolute best case scenario –reading the tea leaves of the situation– Hajek plays well enough to increase his trade value. Right now he has no value. After all, he can’t even beat out Johnson or Smith for the 7D spot. Not even the 6D, the 7D.

At the very least, he’d be able to be dragged around by Tony DeAngelo, who has experience dragging around boulders, or Adam Fox. If he looks good for a little while, maybe there’s enough to throw him in a deal for a center upgrade.

All this said, let’s remember that Hajek wasn’t all that good in the Czech league during the COVID delays.

It seems clear that Libor Hajek doesn’t have a future with the Rangers. His next best bet is catching on with Seattle in the expansion draft. Before the season started, it was him or Brett Howden who was pegged as Seattle’s potential selection. However things have clearly changed.

Howden is looking halfway decent in his 4C role. Hajek can’t even get in the lineup. I doubt that Seattle would find value in taking Hajek, who again can’t even beat out Jack Johnson. Remember that Seattle has a very analytically inclined group. They will look at his inability to get in the lineup over Johnson –and Smith– as an indication he’s not NHL material.

It is what it is

This is unfortunately where the Rangers likely stand. Hajek won’t get in the lineup enough to boost value. His likelihood of being taken by Seattle is shrinking by the minute. Thus the Rangers are likely going to be stuck with him.

What’s even worse is that since he’s on the taxi squad, he can’t play in the AHL. At least not yet. I’m sure the Rangers will do some sort of paperwork transactions to get him AHL game time, but for now he’s not even getting game time.

Hajek’s future with the Rangers is cloudy because he hasn’t been used at all this season. Or perhaps that answers the question for us.