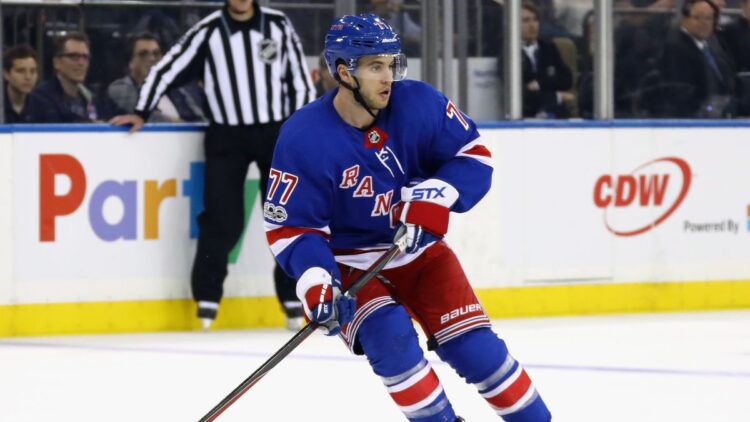 As the Rangers look to trade Tony DeAngelo, Darren Dreger noted that there is significant interest. This makes sense, since teams feel they can get him for pennies on the dollar in a trade. This is likely true, since it’s clear he’s played his last game for the Rangers after the fight with Alex Georgiev.

To address the first question: Why did he clear waivers? The answer is simple: Money. By claiming him on waivers, a team is responsible for the full cap hit and full actual salary. Since DeAngelo’s contract is backloaded, it’s a decent chunk of change for a wild card. In a flat cap, there also isn’t much room to take on DeAngelo’s $4.8 million cap hit. It’s always about the money.

With that addressed, let’s make some assumptions before diving into this. The first is that the Rangers are likely going to have to take money back in a deal, or at least retain some salary. The second is that the Rangers aren’t going to get “full worth” for DeAngelo. Remember they’ve been trying to trade him for a while now, so the price already wasn’t what some thought they should get. The third is that they are likely to try to get a body to play center. There’s enough defensemen on the roster to at least fake it through half a season.

The last assumption may be a bit of wishful thinking, but it’s a realistic scenario. The Rangers may find a “change of scenery” trade, which might actually net them a real asset.

Reminder: I’m not good at valuing draft picks in these kinds of scenarios. Just assume that anything mentioned likely needs picks to be balanced out.

DeAngelo to the Ottawa Senators

My go-to for any trade involving a bigger cap hit, Ottawa has some interesting options. The first that comes to mind is Artem Anisimov. He’s not really a viable NHLer at this point, but he’s a center who might be able to fake it in the Rangers bottom-six. The money is almost identical too. The good news for the Rangers is that Anismov’s deal ends after this season. This would basically be a salary dump for the Rangers. I’d assume that since the Senators are getting an actual on-ice asset, the Rangers might want the Sens to include a pick in this scenario.

But let’s dig deeper. Erik Brannstrom, for some reason, is out of favor in Ottawa. The highly skilled defense prospect just can’t seem to get in the lineup. It’s a bit weird, for sure, but it is what it is. It makes you wonder if there is a package deal that includes Brannstrom and the Rangers adding to DeAngelo.

The third is the change of scenery scenario with Colin White. White is another player rumored to be out of favor in Ottawa. The problem is money, but this time for the Rangers. White is signed for another four years after this one. It’s a major risk to take if the 24-year-old can’t secure a top-six role in the short term. He’d need to at least be a top-nine when Filip Chytil gets back.

DeAngelo to Calgary for Sam Bennett

Sam Bennett is another name that has been rumored to want out of his current situation. He’s not exactly performing in Calgary, and his metrics aren’t overly good either. But he’s a young forward and a dart throw isn’t a bad option in a trade for Tony DeAngelo. Perhaps the significantly more skilled Rangers prop him up a bit.

For Calgary, they could use another body on defense, since they are very top heavy. This is the least likely scenario to occur, but I do believe the Rangers would try to send DeAngelo out west. I’m guessing the Rangers would insist on a draft pick being included in this situation.

DeAngelo to Anaheim for David Backes

Another contract/contract swap, but this time for David Backes in Anaheim. Backes, like Anisimov, isn’t good anymore. But his contract also expires this season. The Ducks have no defensive depth, but have center depth to spare. The thing is, as mentioned. Backes isn’t a real asset. He’s dead money for this year. In essence, the Rangers would make this trade to free up the $4.8 million next season. This is another scenario where the Rangers might insist on a pick being thrown in.

The only other option that makes sense, if the Rangers can’t find a trade for Tony DeAngelo, is to buy him out this offseason. Buying out DeAngelo is a lot different than buy outs in the past, because DeAngelo is under 26 years old. That means the buyout is only 1/3 the salary, not 2/3 the salary.