K’Andre Miller is a bright spot on the Rangers’ roster 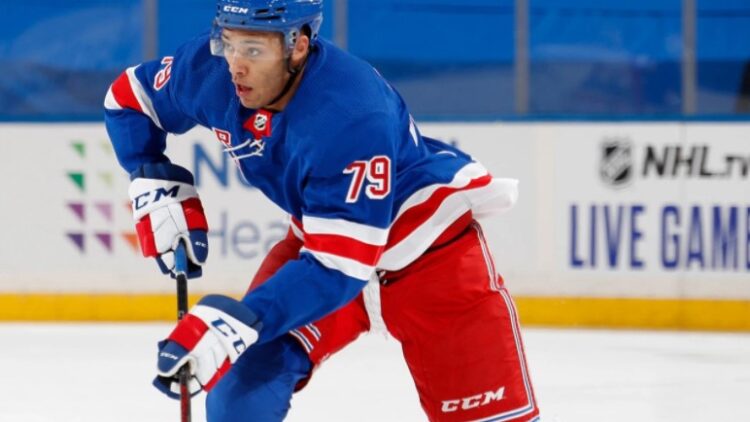 Through his first seven games with the Rangers, K’Andre Miller has seemed to hit his stride.

As anyone could expect, with the shortened training camp and a lack of a preseason this year, the 21-year-old rookie defenseman looked a little shaky in his first game on NHL ice. However since then, he has become one of the early highlights on the defensive end.

Miller scored the first goal of his career on Tuesday against Buffalo, when the Rangers lost their fourth straight game by one goal. He recorded a secondary assist in the shootout loss to Pittsburgh on January 22nd.

Miller has clearly found some comfort playing next to a veteran presence in Jacob Trouba. This despite Trouba’s struggles through his first two seasons with the Rangers. His ability to step into this role with confidence has allowed Miller to fill a hole on the defense.

Miller’s skating ability and size makes him a force to reckon with through the neutral zone and on offense. Through the first handful of games this season, he has shown good ability and control on offense and can make plays to keep the puck in the zone.

Miller has been on the ice for eight of the 13 goals even strength goals the Rangers have scored this season. He is second to only Adam Fox in even strength ice time on the year. He also led the team at even strength against Buffalo on Thursday.

Additionally, outside of a handful of rookie mistakes — i.e. Jack Eichel squeezing in behind Miller and poking a solid pass past Igor Shesterkin — Miller’s presence on the defensive end has been as impressive as on offense.

In the d-zone, he does a good job of positioning himself and holding players to the outside of the zone. Doing so forces lower quality shots and passes and assists him in breaking up plays.

And the effectiveness of what has been seen on the ice is supported by Miller’s underlying numbers.

Through the first seven games, Miller has a Corsi-For percentage of 54.09 and an expected goals for percentage of 56.22, second to only Fox out of those who have played all games this season.

Miller’s goals for per 60 of 4.39 leads Rangers defenseman in all seven games. His goals against per 60 is a mere 1.85, lowest of all defensemen appearing in all games. In addition, Miller is generating more plays ending in shots on goal than are bein generated by his opponents when he is on the ice (33.98 compared to 29.07).

How to stay on this trend

Miller’s numbers clearly show the impact that he has managed throughout the early games this season. The key now is to push him to continued success.

Through the early games of the 2021 season, Miller has proven he has the ability to bolster the Rangers’ defense. More experience will only make him more confident and help him become a true NHL defenseman.

The system the Rangers are running this season suits K’Andre Miller and his strengths. It allows him to play to these strengths on both ends of the ice. It has also benefitted both the rookie and the team in the process.

So long as Miller is encouraged to continue to play his game, and not let any momentary lapses take away from his confidence — similar to what we saw after Eichel on Thursday — there is a good chance Miller will continue to be a defensive staple in New York.