When the Rangers traded for Jacob Trouba, he wasn’t supposed to need a specific defense partner to succeed. Instead, he’s been an enigma. Through a season and three games, Trouba has been far from it. He’s not nearly as bad as people make him out to be, but he’s quickly becoming the next big defense contract that isn’t working out.

It’s easy to watch games and point out that Trouba seems to be a little lost. His issues are more in the defensive zone, where, even after a year, he still seems to be missing assignments and coverages. It was a little easier to overlook it last year, given the league-worst team defense. It has also only been three games this year.

There is much more nuance than “he sucks,” which is something passed around these comments regularly. He’s certainly struggling. There’s also nuance in finding him the right partner to put him in a position to succeed. He seems to be just fine as the offensive defenseman. But when he’s with another offensive defenseman, he struggles.

The stats tell the story of a guy who drives offense but struggles on defense. This checks out, given what we’ve seen the past 73 games. This season –and it’s way too early to look at individual stats– Trouba has a 57.28 CF%, which is very good (again – it’s early). But he’s sporting a 47.03 xGF%, ahead of only Jack Johnson thus far. This shows someone who can drive offense, but struggles mightily in defensive zone coverage. 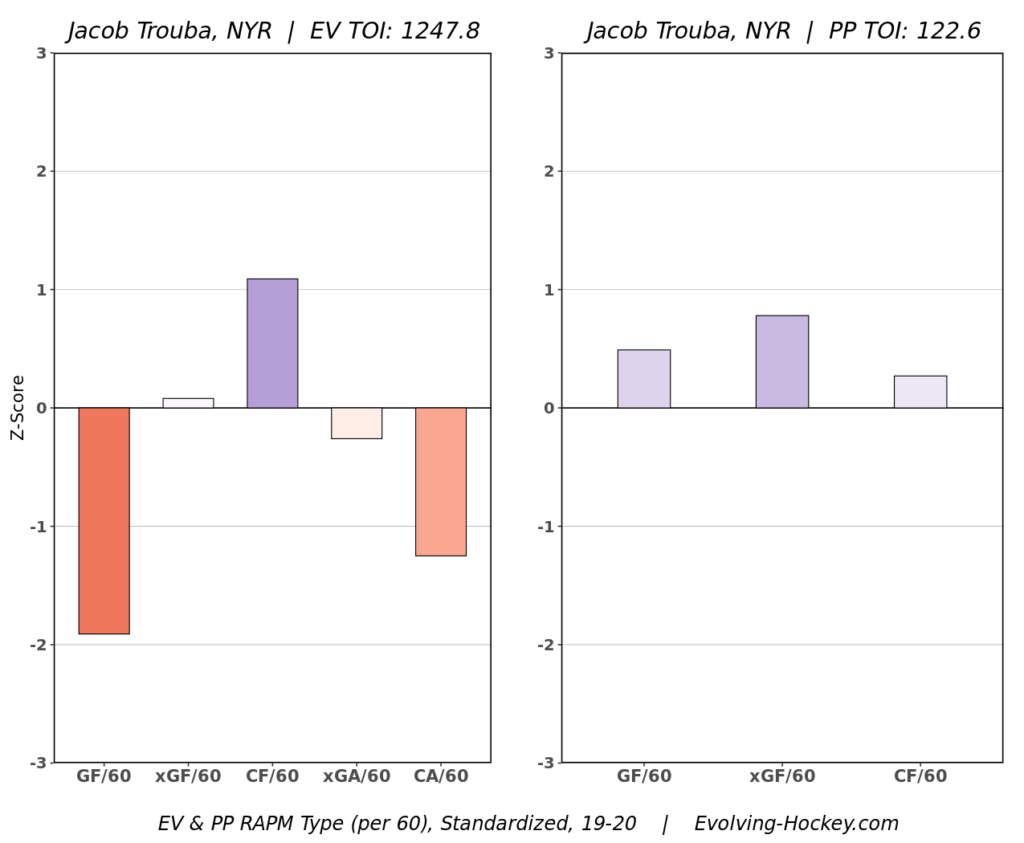 This checks out with what we saw over the full season last year as well. Trouba drives offense, but struggles in his own end. Last year was exacerbated by a bad team and being with a partner that didn’t mesh with him.

He’s still a good puck mover, but as with Tony DeAngelo, there needs to be more to his game. Finding the right defense partner for Jacob Trouba is certainly a start.

What’s Next for Trouba?

This is the tough part. Trouba isn’t going anywhere any time soon, not with that contract. So as mentioned, he needs to be put in a position to succeed. Or at least get the most out of him. He’s looked better with Ryan Lindgren, so that’s a start.

This certainly opens a debate as to whether or not Trouba will live up to that contract. There’s a very good argument that is basically he can’t if he needs to have specific types of defense partners. The counter point is that as the Rangers get better, then Trouba will be a big part of that.

The Rangers need Trouba to play well. Over the last two games, he’s been superb with Lindgren as his partner. Considering Adam Fox can play with anyone, then perhaps Lindgren and Trouba should be a defense pair. This one seems to work. Let’s hope it sticks.