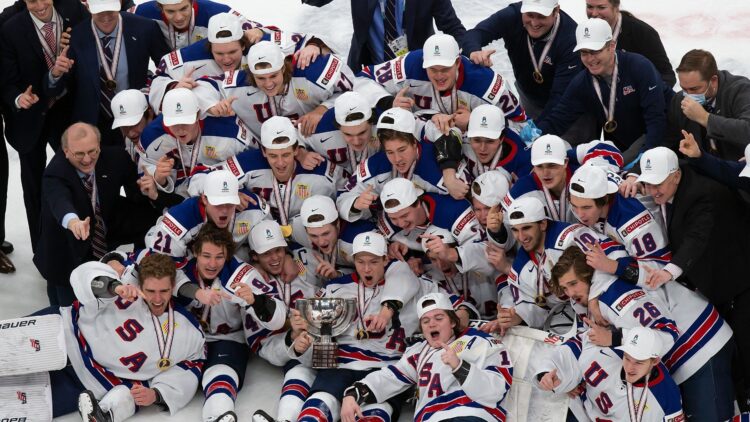 New York Rangers prospects Brett Berard and Hunter Skinner won a gold medal with Team USA in the 2021 World Junior Championship last night. Berard played a key role in this year’s gold medal-winning run, with five points in seven games and generally dominant play on Team USA’s third line.  The two future Rangers join a long list of Blueshirts that have a connection to, and medals with, USA Hockey and the World Juniors team.

The Rangers have a deep history of drafting from the United States National Team Development Program (USNTDP) and other Team USA members. Since 2008, those picks have included Derek Stepan, Chris Kreider, Ryan Bourque, J.T. Miller, Brady Skjei, K’Andre Miller, and the aforementioned Skinner and Berard.

Not only have all of these current (and former) Rangers players developed through USA Hockey, they have the medals to show for it. Stepan, Kreider, and Bourque all won gold with Team USA in 2010. Vesey, Trouba, and Miller won gold in 2013. Fox and Lindgren won gold in 2017 and have a bronze medal as well. Now Skinner and Berard have gold from the 2021 tournament.

Like Berard in 2021, these other Rangers have a history of dominant play in the WJC. Chris Kreider was a point-per-game player in his U20 Team USA career. Derek Stepan was the captain of the 2010 gold medal team, with 15 points in just seven games. Jacob Trouba dominated in the 2013 gold medal run, wearing an “A” and earning nine points in seven games along with his strong defensive play.

Adam Fox and Ryan Lindgren spent time paired together, and both earned “A”s for the 2018 World Junior Championships. In 2017’s gold medal win, Fox had four assists in seven games.

Many NHL teams have draft picks and ties to USA Hockey. However, the Rangers seemed to have particularly gravitated towards USA hockey players in recent years and found success. The organization has not only pinpointed top USA talent to acquire, but those players went on to prove themselves on one of the biggest stages.


Categorized: Around the Farm