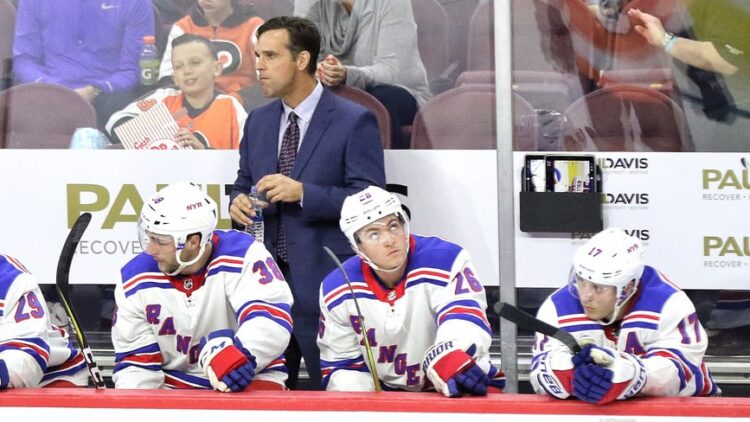 While often an overlooked statistic, the average duration of an NHL coach is two and half seasons. When the puck drops on January 14th, David Quinn will be entering that pivotal 3rd season with the club. The Rangers will be evaluating David Quinn to check his viability as a long-term coach.

To be clear, Quinn is far from being on the hot seat when the season kicks off in a few weeks. Neither John Davidson, nor Jeff Gorton seem like the type to keep guys on short leashes. Neither have a history of churning through coaches. With that said, nothing is etched in stone in this business.

As Dave pointed out the other day, this is going to be an incredibly difficult season for the Rangers given their roster construction (where’s the depth?) and the strength of this re-jiggered division (Boston). With that said, there’s still a myriad of different ways beyond win/loss record to check Quinn on his progress of developing this young roster.

If you’ve been reading this blog long enough to remember my regular contributions here, you might recall my extensive work covering the x’s and o’s of hockey. It is one of the most important and overlooked aspects of the game and still does not get enough mainstream coverage. Systems and tactics can help mediocre rosters be competitive and carefully constructed rosters become elite. The Rangers are the former. The problem here is that after two years, the Rangers identify is still not easily distinguishable.

Tom Renney teams cycled you to death. Torts’ teams made the opposition eat boards and turnover the puck down low. They stacked the crease both offensively and defensively. AV’s teams were all about counter attacks. Pressure the defensive blueline and fly the zone. For better or worse, Hank was left on an island. Quinn? It’s hard to pinpoint.

My concern is that he’s trying to take a page out of AV’s book by trying to have different tactics for different situations, oppositions, etc. This works when you have a veteran roster with players that have played under different coaches and systems at the pro level. This roster is still too green.

In 2021, I’d like to see things get paired down, especially in the d-zone. Man coverage is very difficult to execute. You have to think fast and be fast. With a roster of players with under 2 years of experience, the Rangers should play zone coverage more exclusively. You defend your patch of ice regardless of who is out there, time on the clock, etc. It’s simpler to execute and this team needs to play simple hockey to get more cohesion.

If you look at the Rangers time-on-ice chart from last season, it’s pretty well distributed. You don’t have defenders playing over 23+ minutes a night, nor many bottom 6ers tracking below 10 minutes per game. For a team with limited roster depth, that is pretty remarkable. Most coaches wouldn’t trust guys and distribute ice-time so linearly.

With that said, I think Quinn probably gave a little too much ice-time to guys who weren’t really deserving of it. A lot of ink has been spilled on Brett Howden and I won’t rehash old arguments. However, I hope Quinn gives him a shorter leash this year and time on the wing instead of center, so he’ll have less defensive responsibilities.

Kakko did not play well for long stretches of the season last year and should have spent more time in Hartford. I’m hoping he starts playing more like a #2 pick this year, but if not, sending guys down to the AHL shouldn’t be viewed like kids are getting mafia dropped from the Verrazano Bridge. It’s development, not a career ender.

Tony DeAngelo, while he has a D next to his name, should almost be thought of as a third winger. As such, he should not sniff time on the PK and maybe even OT.

Finally, the last and probably the hardest aspect of coaching is player development. If you think Kakko, Chytil, Howden, will all take major steps forward, and some combination of Lafreniere, Julian Gauthier, Tarmo Reunanen, K’Andre Miller, or a Morgan Barron will walk into this lineup and contribute right away, please send me whatever it is you’re smoking.

Evaluating David Quinn in this area relies almost solely on Kakko and Chytil progressing offensively. Lafreniere would also have to meet or exceed the outputs of other first overall picks. Over the past decade, that has been about a 60 point pace for offensive players in their rookie years.

As for others, Quinn has to get productive minutes for Gauthier on the wing. He also needs a breakeven player out on LD for 15-17 mins a night. Between Hajek, Reunanen, Bitetto and Miller, one of those guys must spell Jack Johnson/Brendan Smith…or this division will run riot on that last pair.

Easier said than done of course, but if Torts can get a team with zero 60+ point players and Stu Bickel into the postseason, Quinn should at least have us sniffing at them this spring. Those are my expectations in evaluating David Quinn. What are yours?