Moving Brett Howden to the wing could be the right move

It is no secret that the center position has significantly more responsibility in the defensive zone than the wingers. This holds especially true for David Quinn’s Rangers, as he uses a simple 2-1-2 DZ scheme, or at least that’s what I saw through most of the year. It wouldn’t surprise me to see him change that up with an upgraded RD across the board. But that’s a whole other topic for another day.

Under Quinn, the center is expected to play the high slot in the defensive zone. He is responsible for reading the play, reading the coverage, and adjusting accordingly. There is significantly more responsibility for the center under Quinn than under Alain Vigneault. Which brings us to Brett Howden, who struggled mightily across the board, but mostly in the defensive zone. 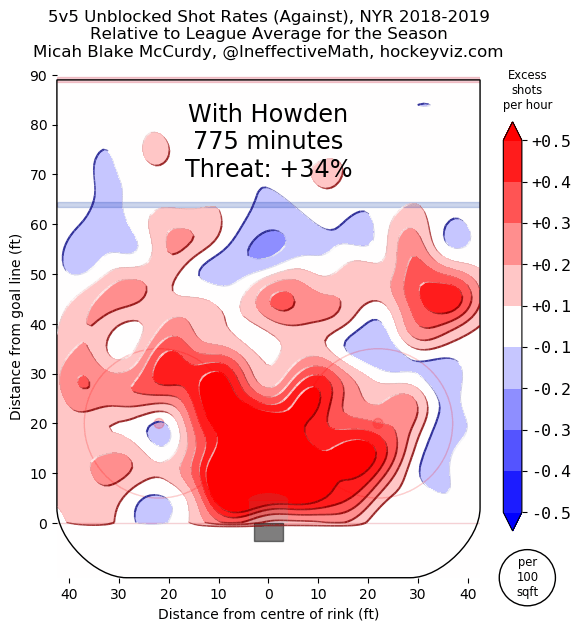 This shows us how many shots came from high danger areas while Howden was on the ice. Now of course this isn’t all on him, but it’s worth noting that that giant amorphous blob of red covers a good amount of his responsible areas in the DZ. Suffice it to say, he wasn’t doing a good job in the defensive zone. That’s ok though. It was a rough rookie season.

To take some of the pressure off of Howden, it might make sense to move him to wing, where his defensive responsibilities are limited. His role would be to cover the points and cover his defenseman sneaking in. He’s a good skater, and he might be in a better position to trap a pinching defenseman and transition better than he has in the past. It allows Howden to transition to the NHL with less on his mind, allowing his offensive creativity to take over.

Also worth noting is that if the Rangers are truly set on Filip Chytil as the 2C and Lias Andersson as the 3C, they might want to get more playing time for Howden in the top-nine. He can always shift back if someone falters or once he has gained enough confidence back after an abysmal November through April. An added perk is that the Blueshirts may wind up short a winger or two if/when they dump a forward, and if one of the rookies needs a month or two in the AHL.

The name of the game this year is growth and development. The shift from center to wing is a relatively easy one to make, and one that promotes confidence and an easier transition to the NHL game. With Howden’s struggles last season, this move might be in line with getting him back on track.