We saved the best report card for last, and that is David Quinn. Quinn just finished up his second season as NY Rangers head coach, and the team certainly performed better this year than last. The Rangers went 37-28-4 in 69 games this season, a huge improvement on 32-36-14 from the year before. If anything, that shows signs of progression.

There are a few areas to grade Quinn on. The first is the record, which is obviously better than last year. Secondly is the system, something we’ve spoken about regularly here. The third is how the players were deployed.

The system needs help. It’s not the offense, it’s not the powerplay. I’m actually going to give Quinn a break on the defensive zone coverage. The defensive zone system is pretty simple, and when executed properly should minimize quality against. In fact, from December to February, the Rangers were pretty solid in their own zone. Progress is progress.

The issue is neutral zone defending. The Rangers, by design, appear to give up the blue line. I’ve beaten this one to death. The Rangers will not have success defensively if they continue to allow the opposition to gain the blue line with speed. Players in the NHL are too good and too fast to allow that to continue.

If David Quinn and the Rangers are going to take the next step, then this needs to change. Stepping up at the blue line is critical to future success. The Rangers will need the right personnel for this, which is an issue that Quinn himself can’t solve.

This is an area that many had an issue with. Lindy Ruff’s departure may help somewhat, but at the end of the day, this is on Quinn. The biggest issues are with Brett Howden, Libor Hajek, and Marc Staal. Nothing on the players here, just on the coach’s deployment. 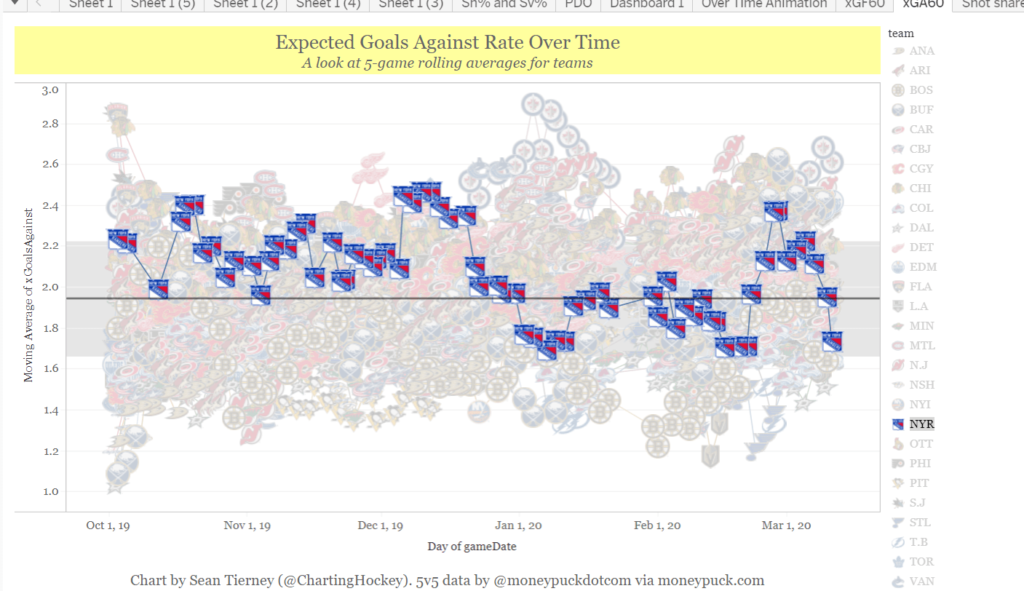 The Rangers had their best period of play from December to February. Mika Zibanejad returning from injury played a part here. But this was the time when Hajek went down with an injury. This removed him from the top pair, resulting in Brady Skjei getting more time.

This is also when the Rangers recalled Ryan Lindgren, pushing Marc Staal down the lineup. With Hajek out and Staal on the third pair, Skjei and Lindgren got the lion’s share of ice time at LD. Playing your best players leads to better results. Simply by limiting Staal’s minutes and removing Hajek from the lineup, Quinn lucked into these decisions through the injuries. However, he didn’t revert back to old combos when he found what worked. That’s also a critical piece.

Quinn isn’t the perfect coach. But for every two steps forward the Rangers take, they’ve take one step back in this process. His third year is going to be a big year. It’s all about the process.