The generational Ranger is apparently in his last weeks as a member of the New York Rangers. That is, if you believe the rumors. The report card on Henrik Lundqvist for what looks like his final season isn’t the best he’s ever received. Perhaps a sign of a 38 year old goalie starting to show his age. Also perhaps a sign that the system played in front of him isn’t working anymore.

The Rangers, for as long as we can remember, have played a different net-front system in front of Henrik Lundqvist. Understanding the system is critical as we evaluate the netminder. The Rangers “fronted” with Hank in net. This is a strategy that has been in place since the Cam Talbot days. This means the net-front defenseman plays in front of the man in front.

This allows his defense to absorb shots so Hank doesn’t have to. The main positive with this strategy is you’re preventing the enemy from getting direct deflections/tip-ins, which are often the hardest types of saves a goalie can make when facing zone pressure. The negative side to this strategy is if the puck does get through your defense then the enemy forward often ends up with a good screen or an unchallenged chance at a rebound.

The other system is net-side positioning, which the defenseman is behind the attacker in front. The advantage of this system is it allows the goalie to track shots better and prevent the enemy from getting to rebounds. The disadvantage with net-side positioning is you can end up screening the goalie yourself if you fail to move the enemy out of the slot. You also eliminate yourself from takeaways and thus transition rushes, since you’re focusing on the enemy screen and not eating up the puck.

Fronting was deployed for Hank because it allowed him to get a better view of the shot while he was adept at controlling his rebounds. This also worked because, until recently, the Rangers were pretty good at blocking shots. As the game changed, and defensemen needed to also move the puck, fronting became less and less effective.

Compounding this was an aging Hank, as he became less able to direct rebounds to the corners. This left prime opportunities in front. It was by design, but it wasn’t working anymore. 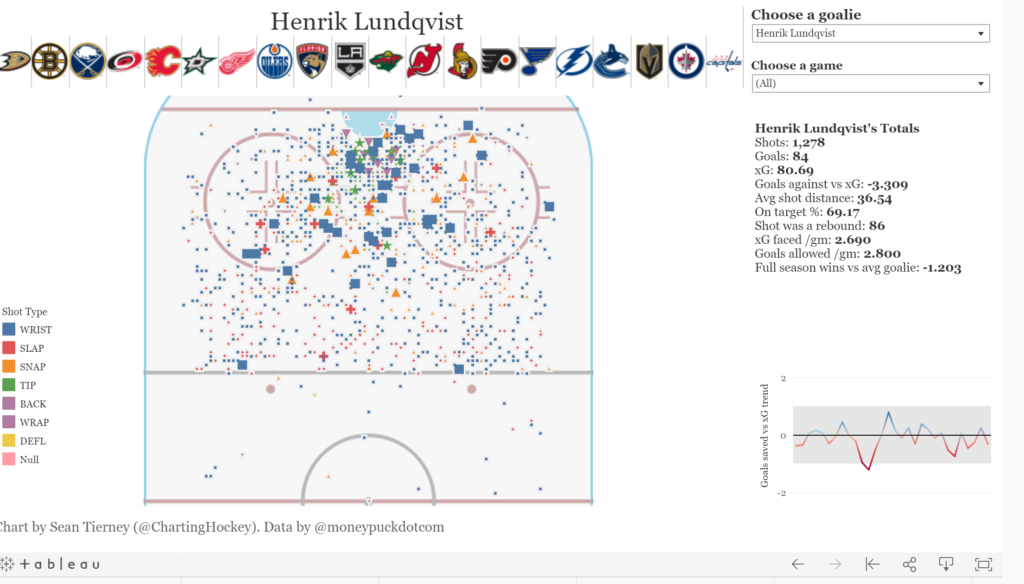 This led to many more high quality chances against. Hank consistently was among league leaders in shot quality faced. While the Rangers defense certainly didn’t help matters, the system was outdated. Given that the system was there for multiple head coaches, it’s safe to assume Lundqvist was requesting they play that way.

Henrik Lundqvist is a generational goalie talent. He forever changed the position and how it is approached. The results did fade recently. Funny enough, this past season was far better than the last two.

Lundqvist was actually not as bad as people have made him out to be this season. His 3.52 GAA and .901 SV% is certainly ugly. Context matters here, as of his 30 games played, only 7 came in 2020, which is when the Rangers really started turning it on. That leaves the overwhelming majority of his starts when the Rangers were a dumpster fire in October and November. The season long numbers need context as well.

His career numbers hit a low in 2017, but recovered this season. He has more left in the tank. This season, compared to his last two, was far better. A simple system fix could extend his career. However, it looks like that won’t be with the Rangers.

It’s tough to grade Lundqvist this season because the surface numbers are bad, but the analytical deeper dive isn’t nearly as bad.