On hockey and Hunter S. Thompson 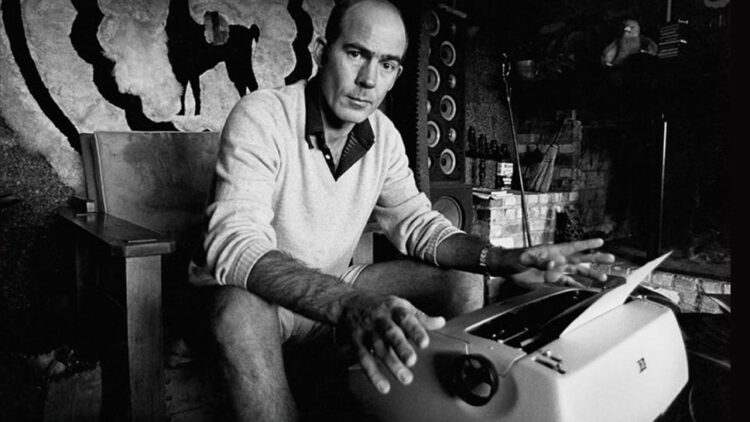 In 1889, Oscar Wilde observed that “life imitates art far more than art imitates life”.  His theory was that this concept “results not merely from life’s imitative instinct, but from the fact that the self-conscious aim of life is to find expression, and that art offers it certain beautiful forms through which it may realize that energy.”

I believe that sports can be a stand in for art in this framework, as I believe very strongly that sports are a form of expression that human beings seek as an outlet for a number of emotional concepts.  Over the past nine or so seasons that I have been writing for BSB, I have seen life imitate art many times over, but much more acutely these days.  The intersection of sports and politics, fear of change, the proverbial hamster’s wheel always spinning has caused something of an existential crisis in my desire to write and engage with both the Rangers and the sport of hockey, as a whole.

In times of crisis, especially in writing, there is only one place to turn: Hunter S. Thompson.  The great Gonzo journalist spent quite a bit of time covering sports in his storied career; from his early career writing for El Sportivo in Puerto Rico, covering the Ali/Foreman fight in Africa and the infamous Sports Illustrated coverage of the motorcycle race that would eventually become the subject of “Fear and Loathing in Las Vegas”.

What many people do not remember, though, was the almost five-year stint Thompson spent writing a weekly for Page 2 on ESPN.com in the early 2000’s, entitled “Hey Rube”.

While focusing (imagine HST “focusing” on anything) mostly on football, basketball and politics, Thompson’s work at ESPN was bizarre to say the least.   However, he was passionate about sports and constantly irritated by the sea of idiotic and bad faith takes that permeated the industry and shaped fan opinion and interaction.  It was disingenuous garbage and Thompson knew it and wasn’t going to let them get away with it.

Looking back on this column some 15-20 years later, it is undeniable how far ahead of its time “Hey Rube” really was.  Sure, some of HST’s opinions and predictions did not age particularly well, but he cut to the heart of the complete and utter bullshit that can make sports so maddening to follow and cover.

Surveying the current landscape of sports media, filled with hack-sycophants and faux-insiders, I realized that the NHL really needs a voice like that.  I’m not implying that should be me, of course, because I am no Hunter S. Thompson, but I feel like when you hit the end of your rope with the passive bile of a complacent and incompetent industry, you can either pack it up, or turn to brutal honesty.  That brutal honesty is something the NHL is sorely lacking.

Rob wrote an article the other day about how NHL GM’s are boring and risk averse. It was a really well written article exposing the hideously short-sighted approach that NHL GM’s take with respect to trades.  Rob is an honorable, respectful guy, so he took the high road instead of calling out what these men really are: incompetent and cowardly.  If you took a GM from MLB and gave him 6 weeks to understand the CBA and study transactional trends and valuation models, he would begin promptly fleecing every NHL GM in sight.

That’s because those guys actually know what they are doing.  The only thing holding them back is ownership greed and artificially depressed spending.  The NHL on the other hand, has your typical ownership greed, repressed spending through a draconian salary cap, combined with terrified man-children who refuse to adopt any sort of novel thinking, which makes them completely incapable of taking any risk to create any transactional efficiency.

So, here is my pledge to you, BSB.  From hence forth, I am going to try to bring a little Hunter S. Thompson into hockey writing.  It’s going to be brutally honest, many-times substance addled, not always correct, but always trying to make you think about this sport a little differently.  If that’s not your thing or you feel like that makes me a [insert pejorative here], just like Hunter, I couldn’t care less.